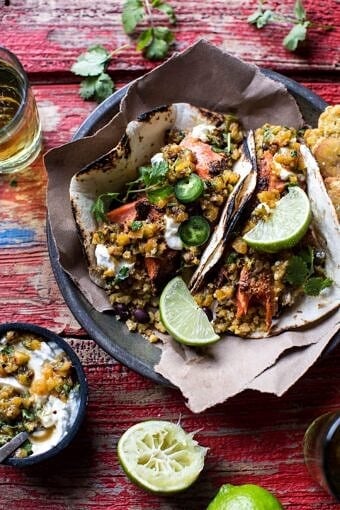 {This post is sponsored by Blue Diamond Almond Breeze Almondmilk! I’ve used their Almondmilk Cashewmilk Blend to create this simple and delicious crockpot creamy cashew chicken. Its ethnic food not out of a box, but made in the comfort of your own home, and it is SO good!!} 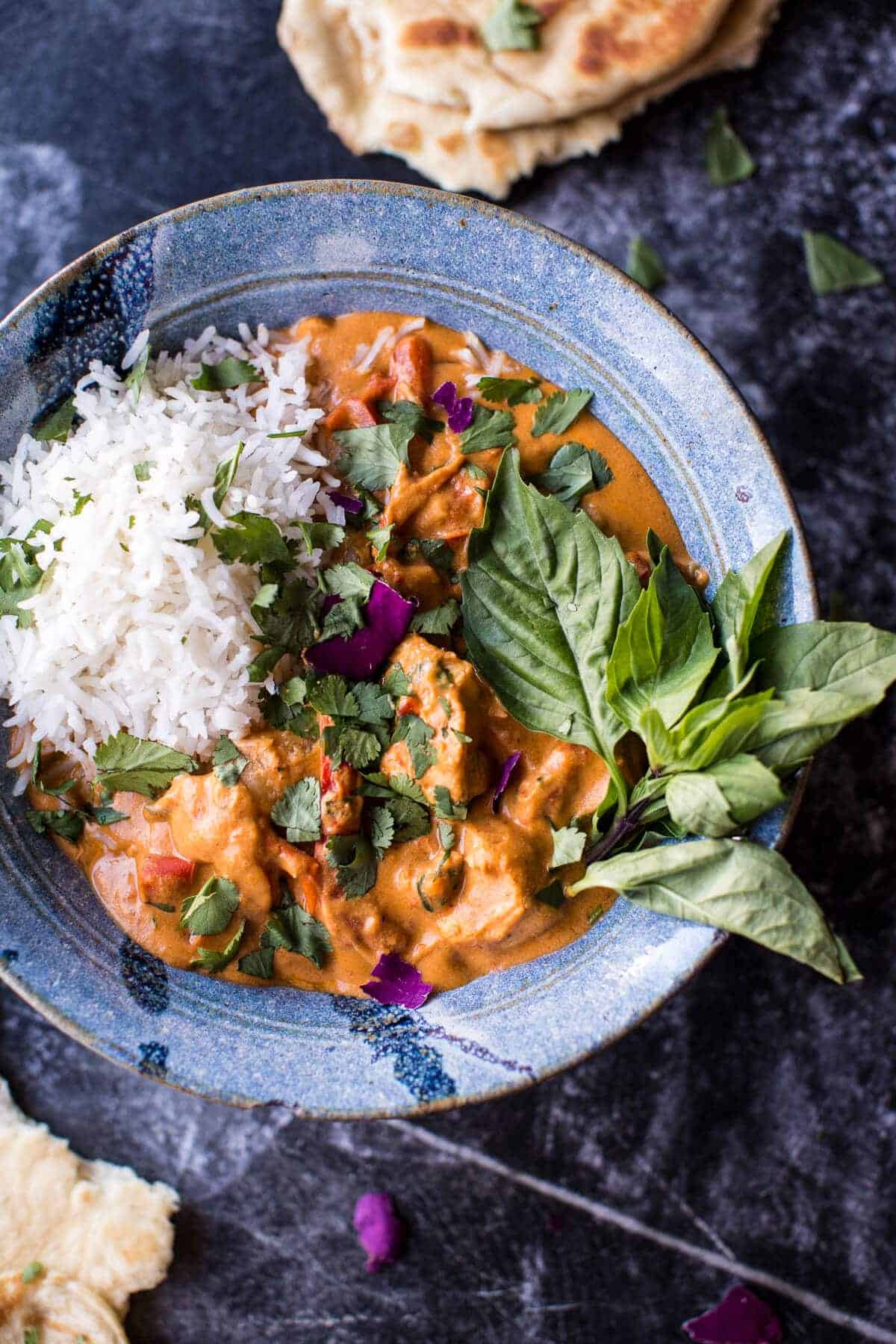 Today we are doing Indian takeout, but at home!! YESSS.

I think I have said this before, but I am a huge homebody. I just really love being home. So much so, that I would totally choose cooking dinner at home over going out to eat. And SO much so that I’d even choose homemade “takeout” over having to get in the car, drive to a restaurant and shlep the food home…okay, that might just be pure laziness on my part, but either way homemade is always the way to go, in my opinion.

Really, it is true, homemade is a million times better, plus YOU get to control over what goes into your food. Sometimes restaurants can totally freak me out. I mean who knows what they are doing back there behind closed doors… clearly, I have serious issues, but I have declared this many times.

Anyway, my point is that most of these takeout foods can be made at home, and may even take less than time than ordering and picking up. They will probably taste much better too!! I have a whole list of “takeout” foods that I want to recreate at home…orange chicken anyone?!?

Anything you guys REALLY want to see?? 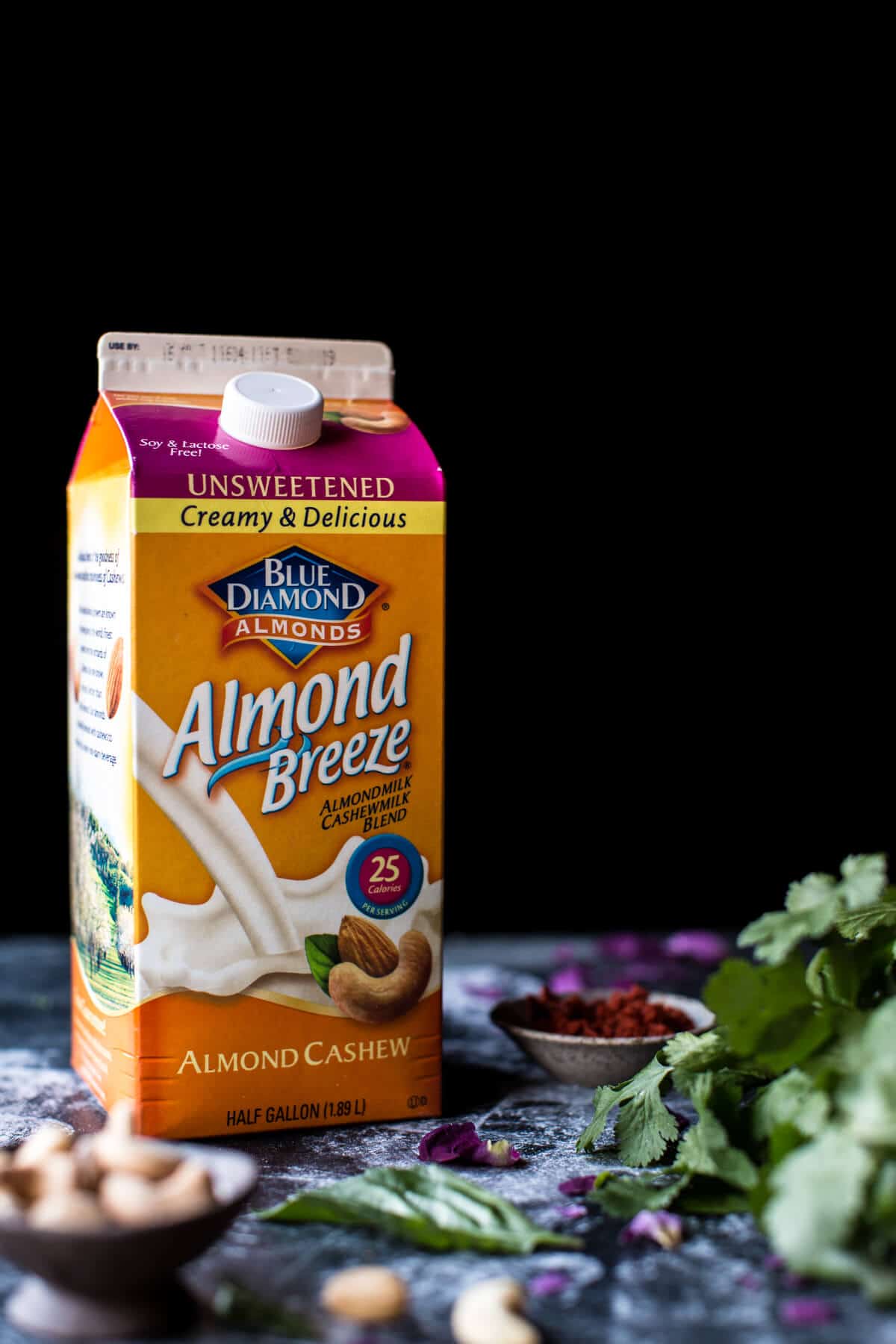 Here’s the deal, do you guys remember back in December when I announced I was partnering with Almond Breeze on their “Imagine the Blendabilities” contest? Well, today’s recipe is the recipe idea I chose to create. I had a GIANT list of recipes to choose from, and to me, this one sounded yummiest, so I went with it! Plus, cashew chicken has been on my list of things to make for way too long now.

I mean, who could not fall in love with a big bowl of creamy cashew chicken, rice and naan. It’s total comfort food, but made healthier and simpler thanks to the crockpot! 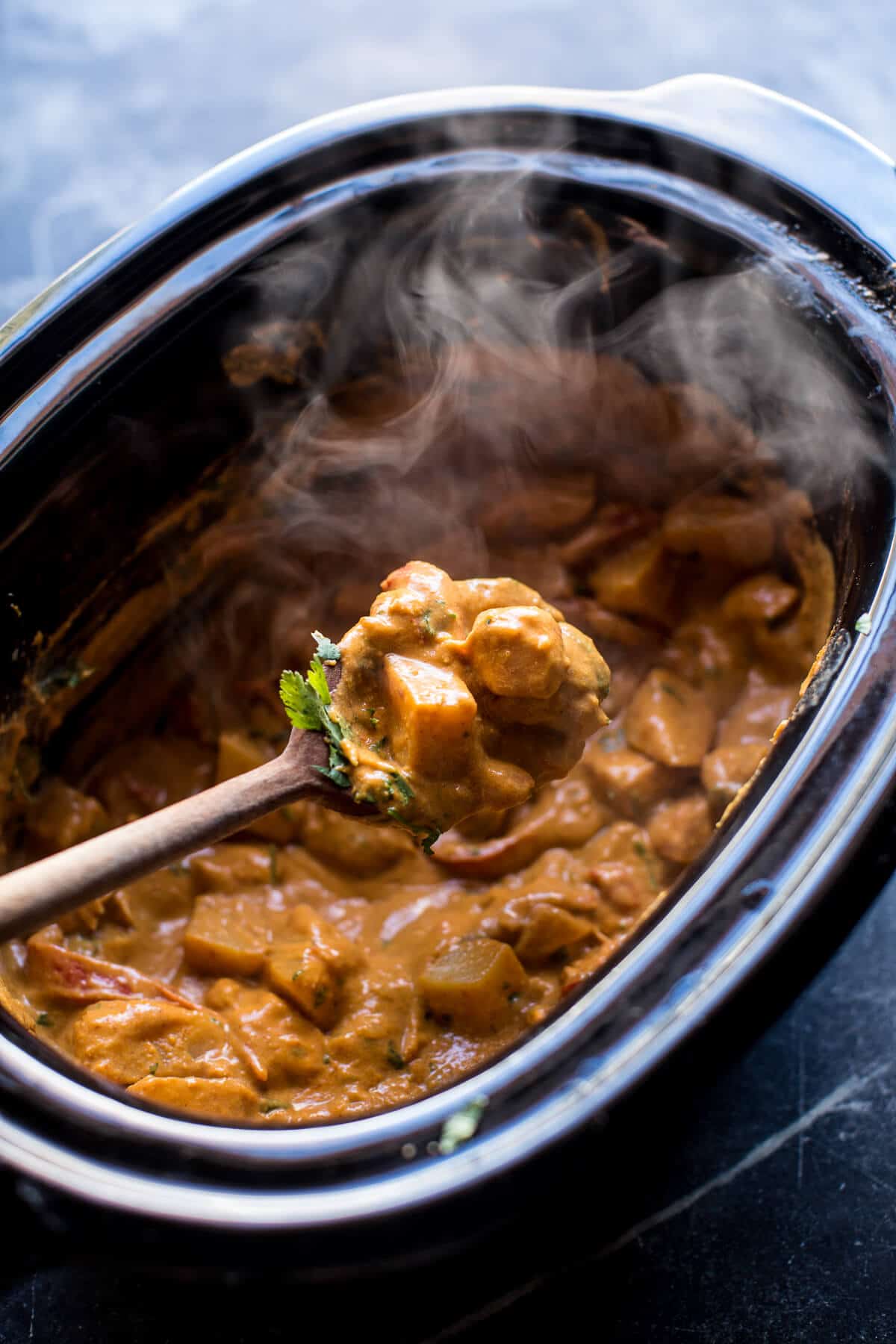 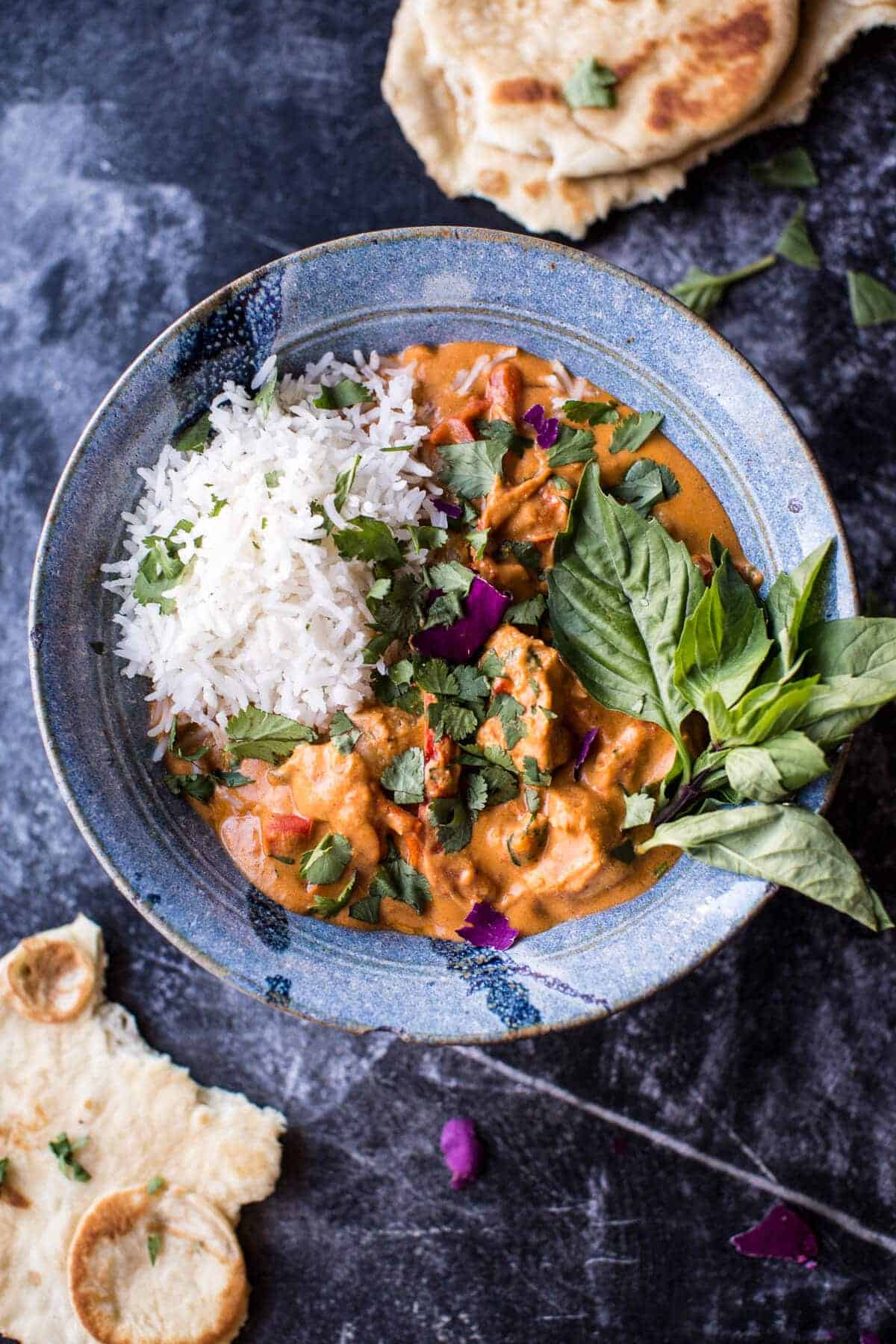 When I was younger, Indian food was pretty much off my radar. My family ate very average foods… and that’s saying it nicely. It was mostly, chicken, steak, pasta, so many ground beef tacos, and burgers for the first twelve to thirteen years of my existence. My brothers LOVED it, and my two oldest brothers still continue to eat the same diet. Honestly, they are both going to majorly regret the amount of meat they are consuming. Just saying.

Sometime during my twelfth or thirteen year, I decided I was so over the steak and started doing some of the cooking. If you really want to get into my whole cooking journey, this is where it began, but I feel like we should try to stay on topic here.

So when I started cooking, I would google things, watched a lot of Food Network and eventually started reading food blogs. One thing or another led me to some Indian inspired recipes and I was HOOKED on their spices and flavors…plus any dish you can eat with rice or couscous I am SO in on. Cashew Chicken is a recipe I have seen and known about for ages now, but just never got around to making. 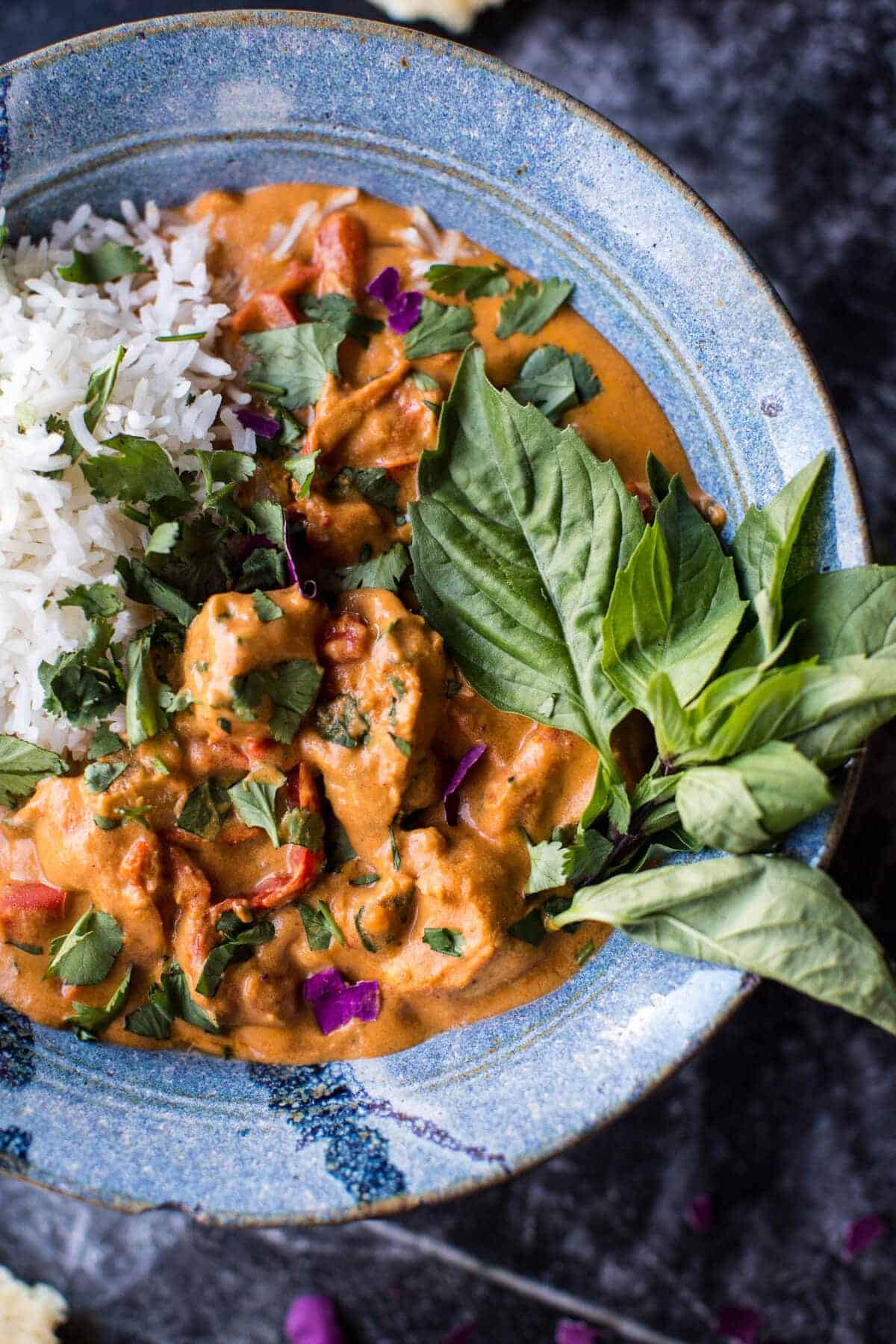 Oh man, what a mistake that was. Cashew chicken is the best!! I have made this crockpot creamy cashew chicken recipe a little different than it is traditionally made, but you guys! It is SO good! Think spicy, but not overly so. Think SO creamy, but without any actual cream. And then think super cozy and crazy delicious!! It’s the perfect weeknight meal or even weekend meal. You can add everything to the crockpot before work or school or wherever you may be, and then come home to a house that smells in-freaking-credible and a delicious dinner that is ready to eat!!

One little tip I have learned over the years is that, while my family loves the spices used in Indian cooking, turmeric is not one of them. So for this recipe I have adapted it slightly to my family’s taste. If you are a huge fan of Indian flavors I highly recommend adding a little garam masala to this. It’s still delish without it, but with it there is more of a traditional cashew chicken flavor.

Also, you may have noticed that I have become slightly obsessed with edible flowers lately. Honestly, I am just on this whole HUGE flower thing all together. I blame it all on winter, and the need for lots of color in my life…ok and my brother Malachi’s snapchat of the 90 degree days, sunshine and flowers he has out there in LA are killing me…highly considering a move to LA. Like HIGHLY.

Anyway, I really love edible flowers. Not only do they add a great flavor, but they are so beautiful. Therefore, I have been adding them as garnishes to everything lately. You DO NOT have to do this…but if you are into flowers too, I say GO FOR IT. 🙂 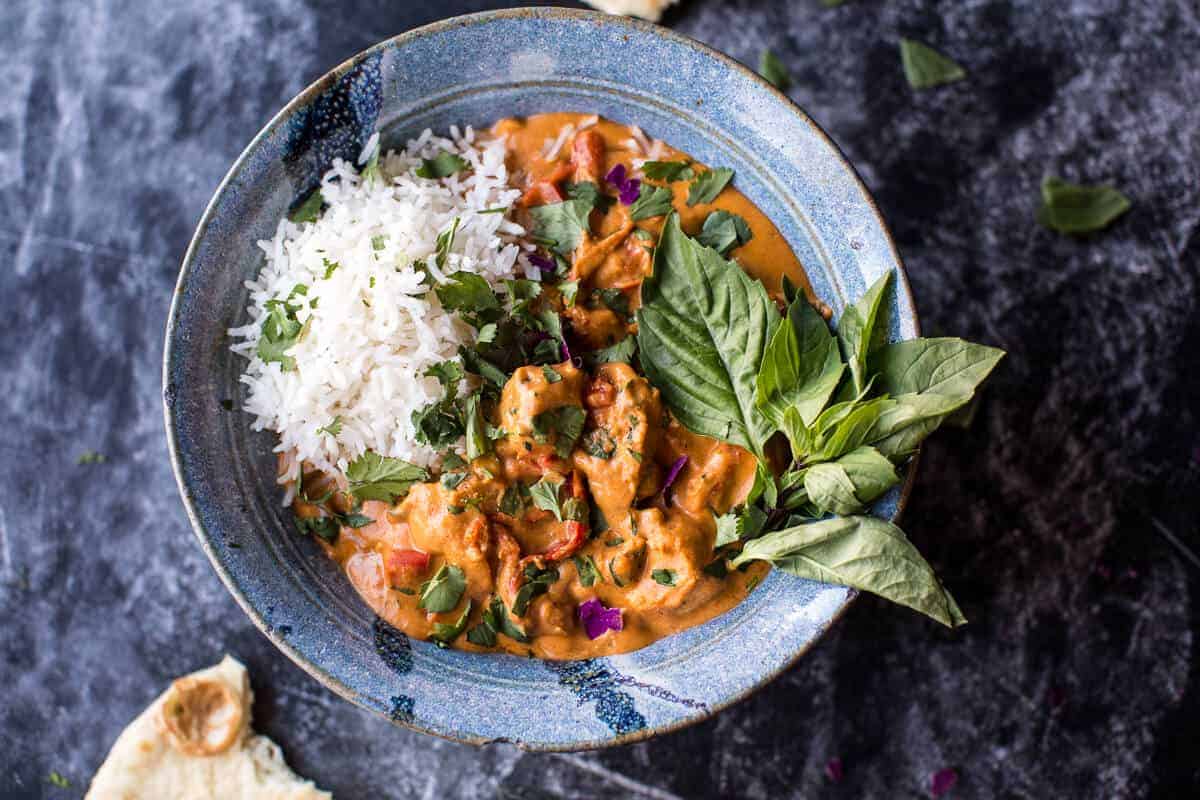 *TO MAKE THIS ON THE STOVE: To a blender or food processor, add the cashews, onion, garlic, ginger, Thai red curry paste, chili powder, cumin, cinnamon, cayenne and lemon juice. Puree the mixture until completely smooth. If needed, add 1/2 cup of Almondmilk Cashewmilk, to help the mixture blend. Drizzle a large pot set over medium heat with oil. Once hot, add the chicken and cook for 5 minutes or until the chicken is cooked through. Add the curry paste, cashew milk, potatoes and red pepper. Cook, partially covered over medium-low heat until the potatoes are tender and the sauce has thicken, about 30-45 minutes. Stir in the cilantro and serve as directed.
View Recipe Comments 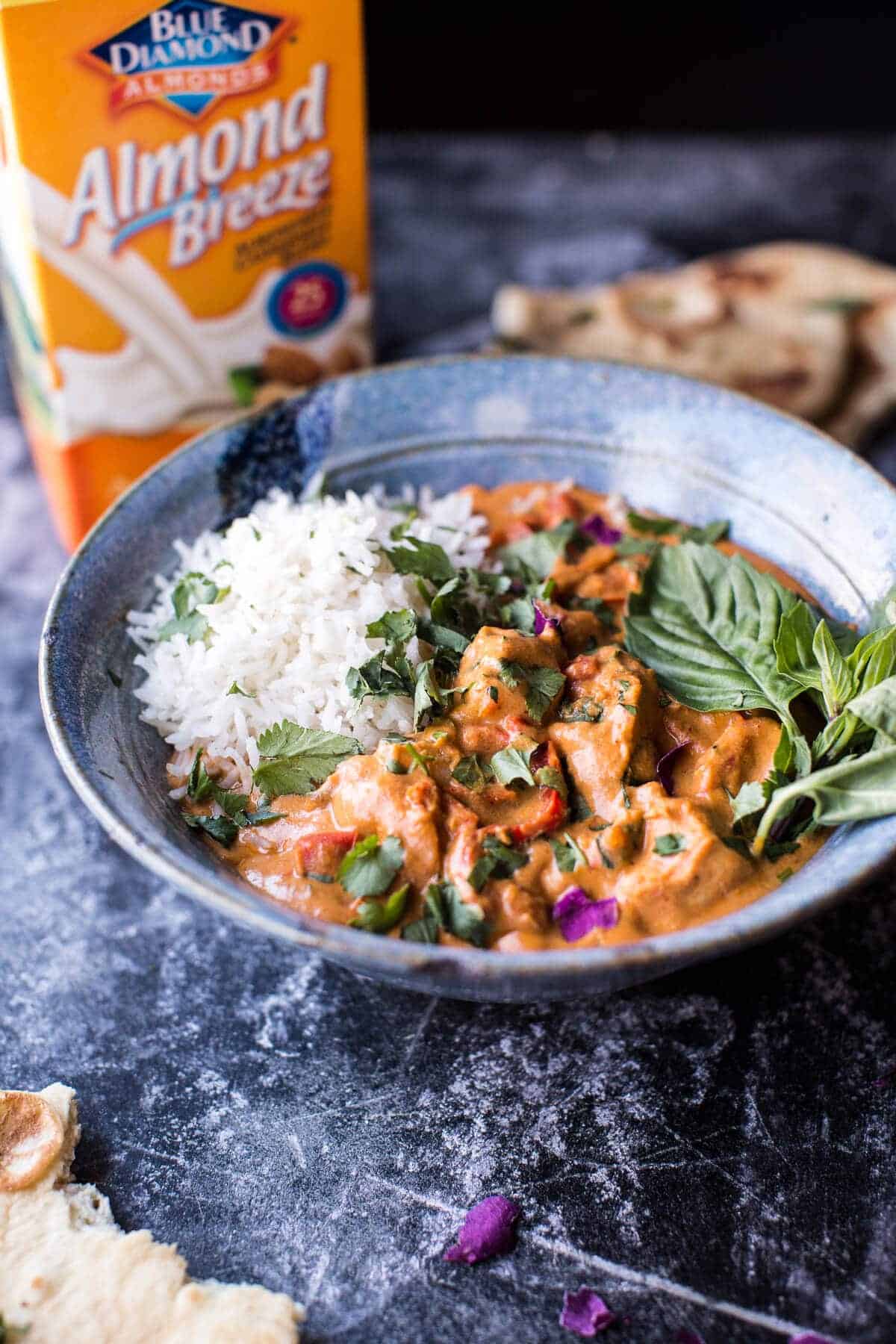 P.S. it’s Wednesday!! We are halfway through the week and tomorrow is Thursday and then Friday and, YESS!!!! Friday is my favorite! 🙂 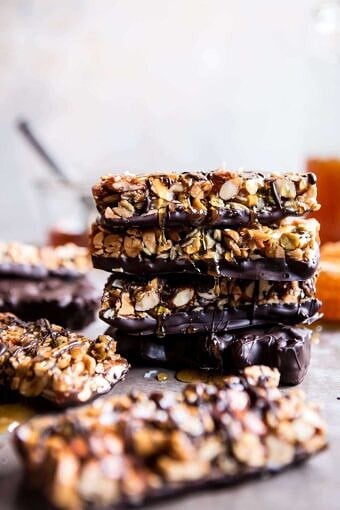