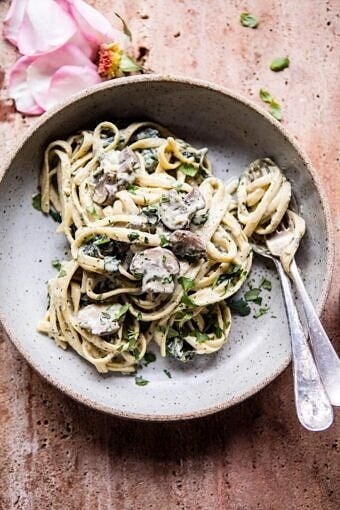 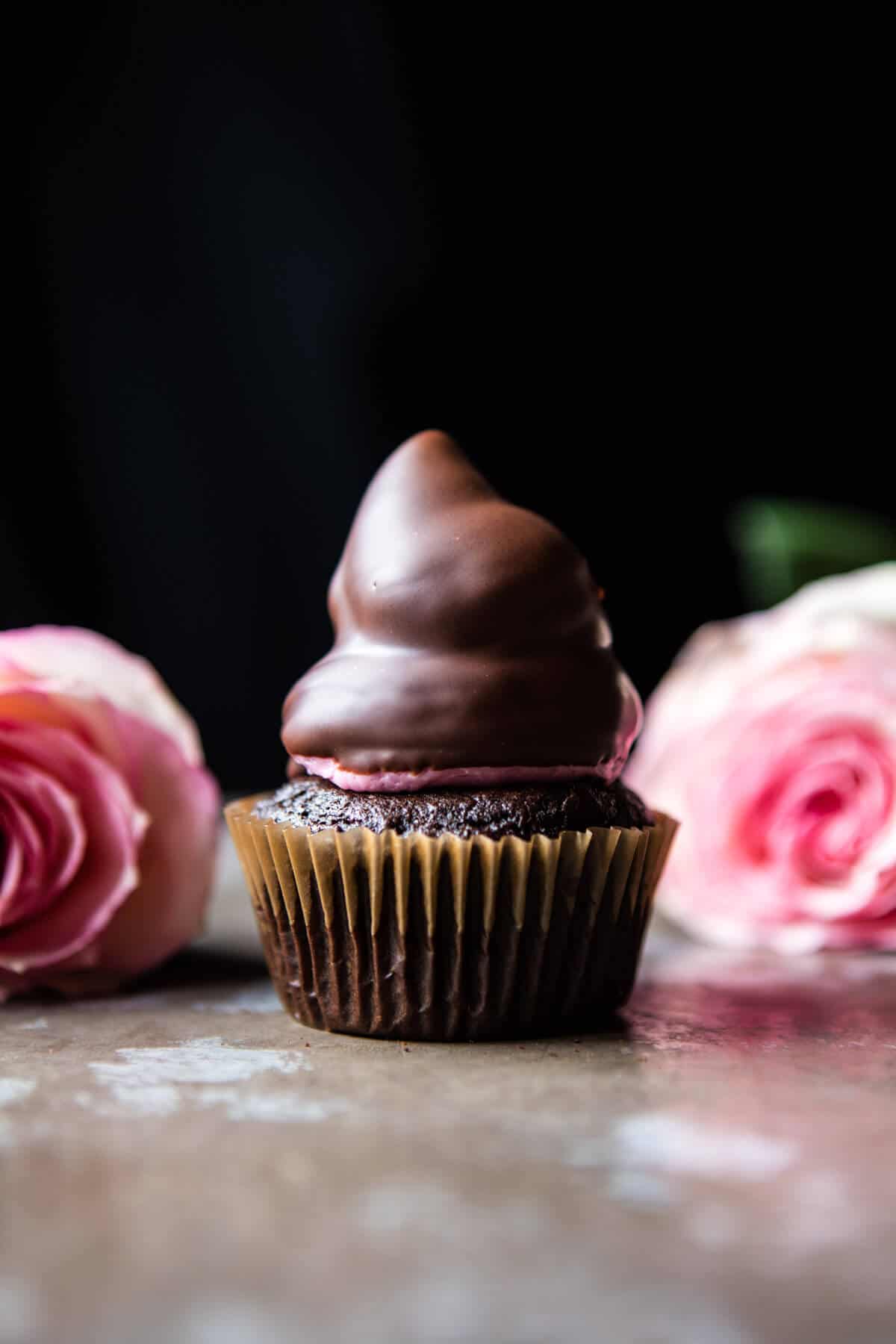 I couldn’t be more excited about all the things we have to chat about this Tuesday. First is obviously these Valentine’s surprise chocolate high hat cupcakes…possibly the most fun cupcake to ever come out of my kitchen. I don’t know what it is, but sweets that are hand-held and piled high at the same time are just so much fun…not to mention delicious.

So what’s the surprise? Well, if you take one bite into these cupcakes you’ll actually discover not one, but two surprises. Yup, going all out today. Deep inside these cupcakes is a rather large spoonful of Nutella, YESSSSS! But most likely, before you even hit the Nutella surprise, you will discover the fun red/pink buttercream hidden under that layer of chocolate you see on the outside. So fun and cute, right? I know it’s a little over the top, but I just couldn’t help it! Cupcakes like these are just too much fun and when it’s February, aka the month of all things sweet and chocolate, I feel as though over the top is totally acceptable. <–and don’t try to tell me otherwise. 🙂 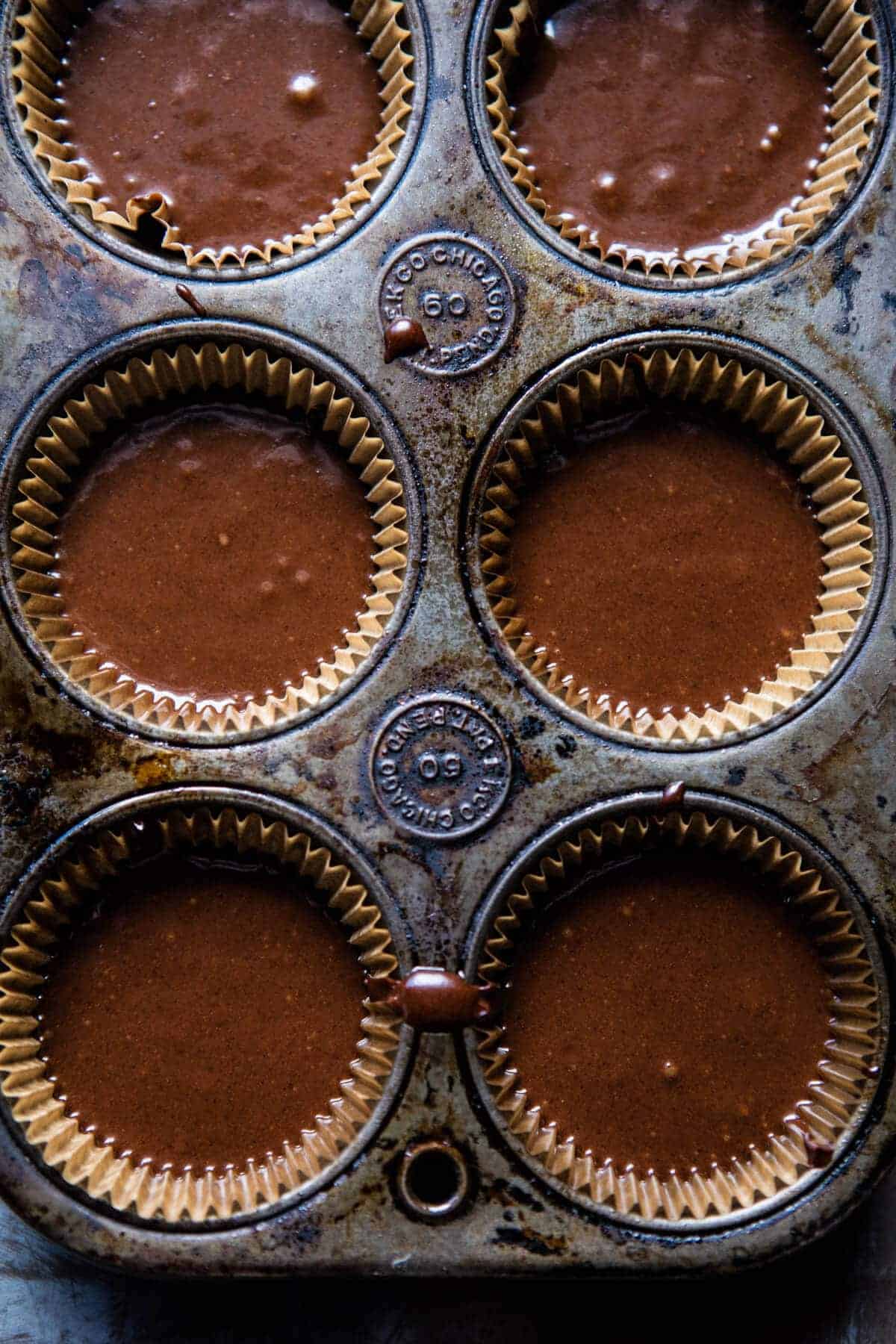 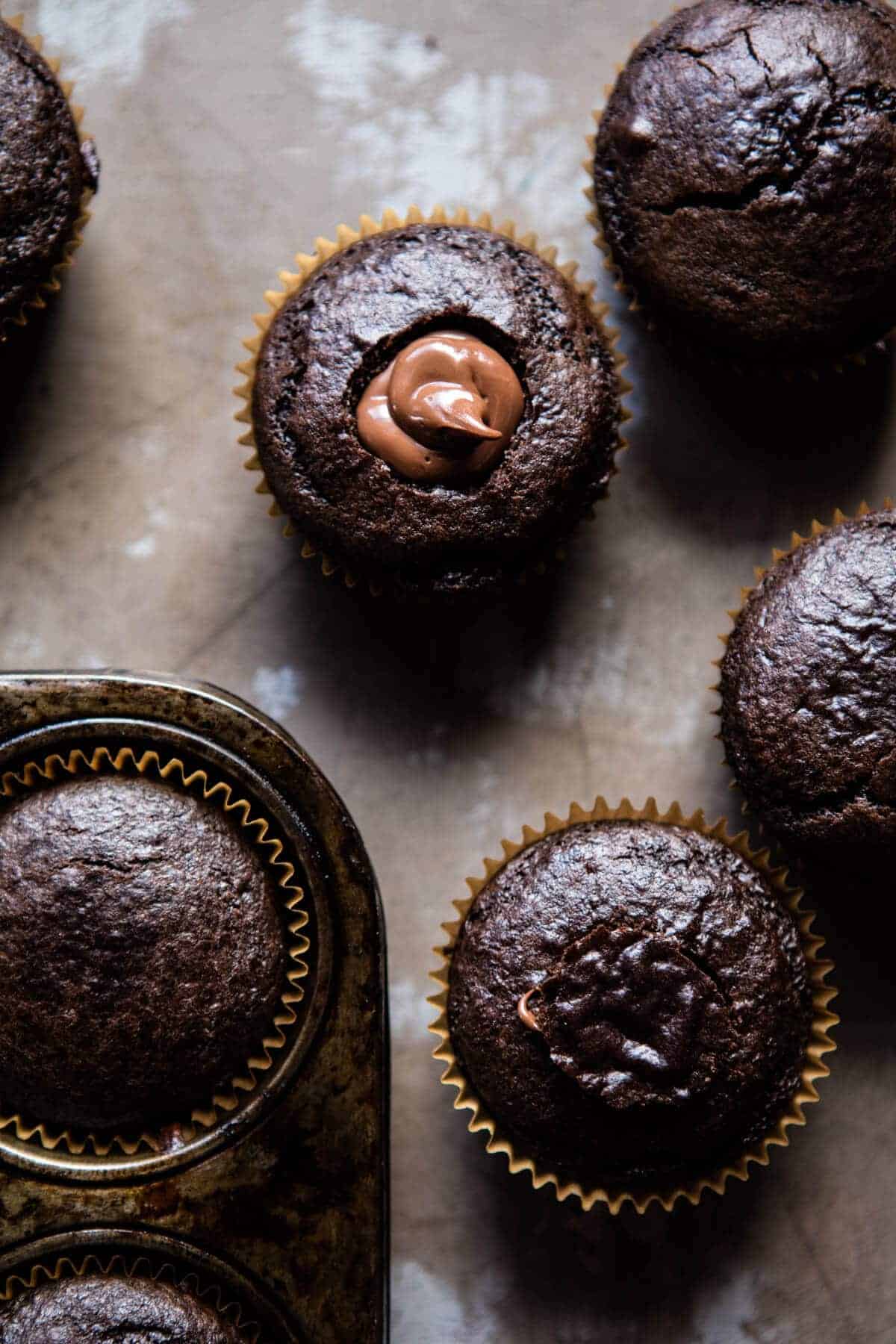 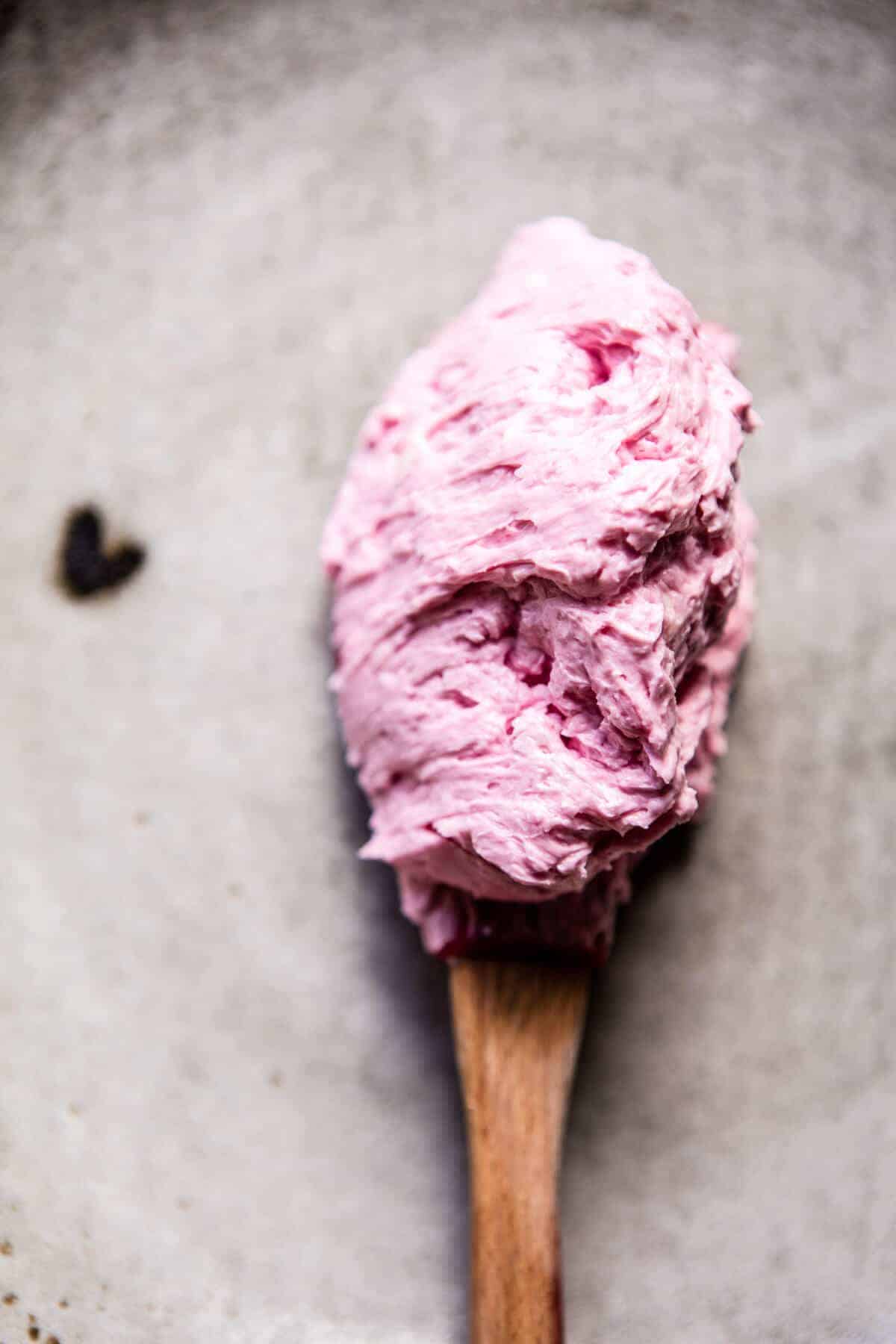 Okok, so I’m taking a little detour from cupcake talk to share my other excitement of the day. If you guys follow me on Instagram then you know that Sunday was kind of a big day for my younger brother Red. He took first place at the Mammoth Grand Prix, which was the first US Olympic qualifier for Men’s Snowboard Slopestyle for the 2018 Winter Olympics. It’s kind of, sort of, a really big deal and I could not be prouder or happier or more excited for him. He’s only 16 and currently the youngest rider on the US team. I feel like I could write a billion words about the kid at the moment, but thinking I’ll save all that for one my “favorites” post. So stay tuned for that, cause the big sister in me has too much excitement and too many words to write about it all.

ps. since the comp took place in Mammoth, CA I had to watch via live stream on Sunday. I was basically a giant yarn ball of nerves…which is also why I am only mentioning all this now. Watching him freaks me the heck out…so glad it’s over (but in a good way). 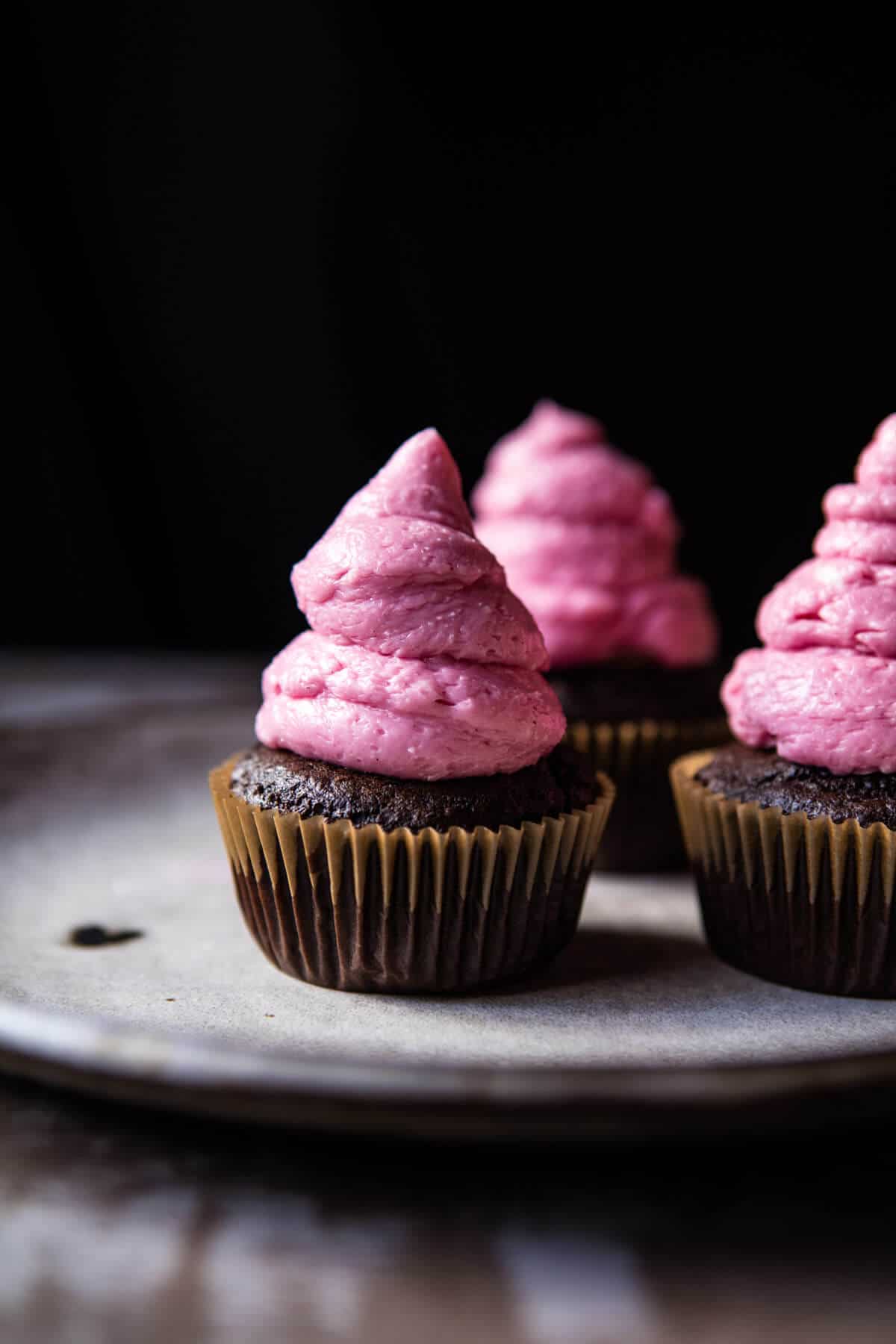 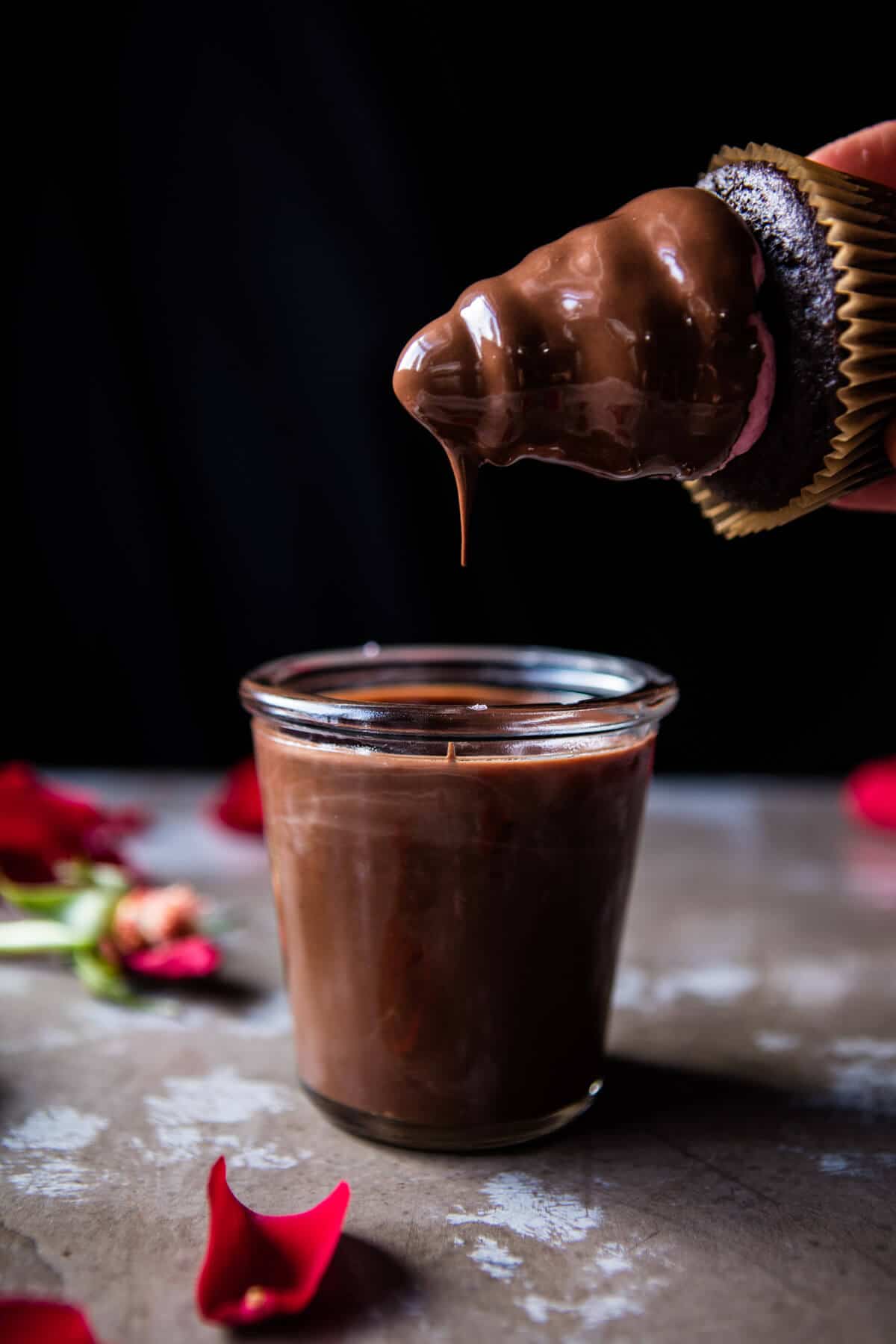 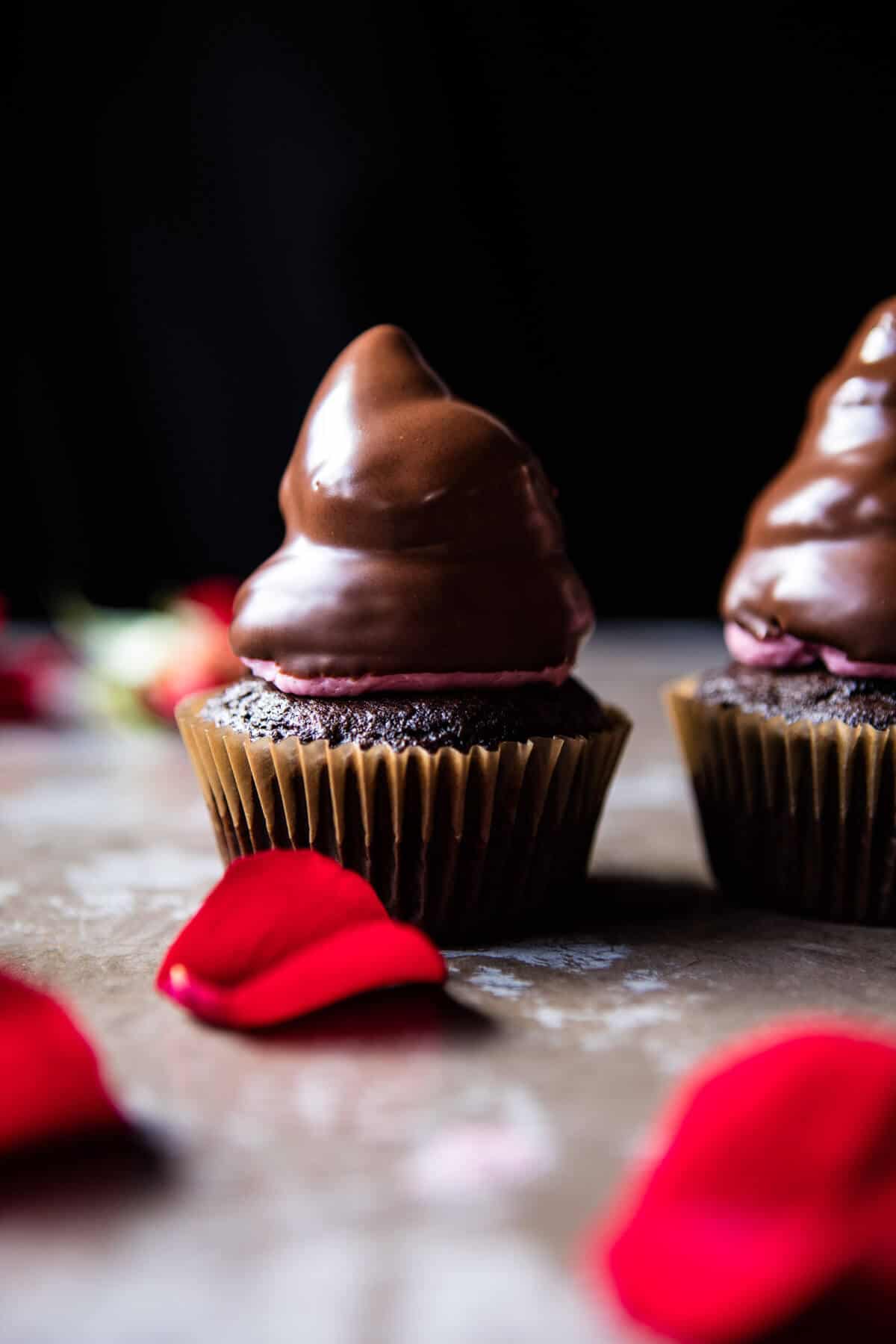 So, anyway back to food, and sweet treats, and all things overloaded chocolate. Up until these guys, I had never made high hat cupcakes, but I am so happy I finally decided to give them a try. I’ve always thought it was such a good idea to dip a cupcake in chocolate, I mean, it’s kind of genius, right? When I was thinking up Valentine’s Day desserts for this month, I could not get the idea of a V-Day inspired high hat cupcake out of my head, so here we are…

Tripled up with chocolate and even touched with a hint of (very naturally dyed) pink! Yup, naturally dyed! I’ve said this before, but food coloring totally freaks me out. I will use it, but if I can avoid it, I most likely will. I’ve always wondered if beet juice would work as a natural food coloring and you know what, it totally does, and I promise, you can’t even taste an ounce of beet flavor. I used two teaspoons of fresh beet juice to color the buttercream and the frosting could not have turned out better. Plus, it was SO easy to do. I just used the red beets I had sitting in my fridge, grated them down and then squeezed out the juice. Simple as that. I ended up with the prettiest, naturally died pink buttercream. Not going to lie, I’m kind of, just a little bit, excited about it…as you will see come Friday. 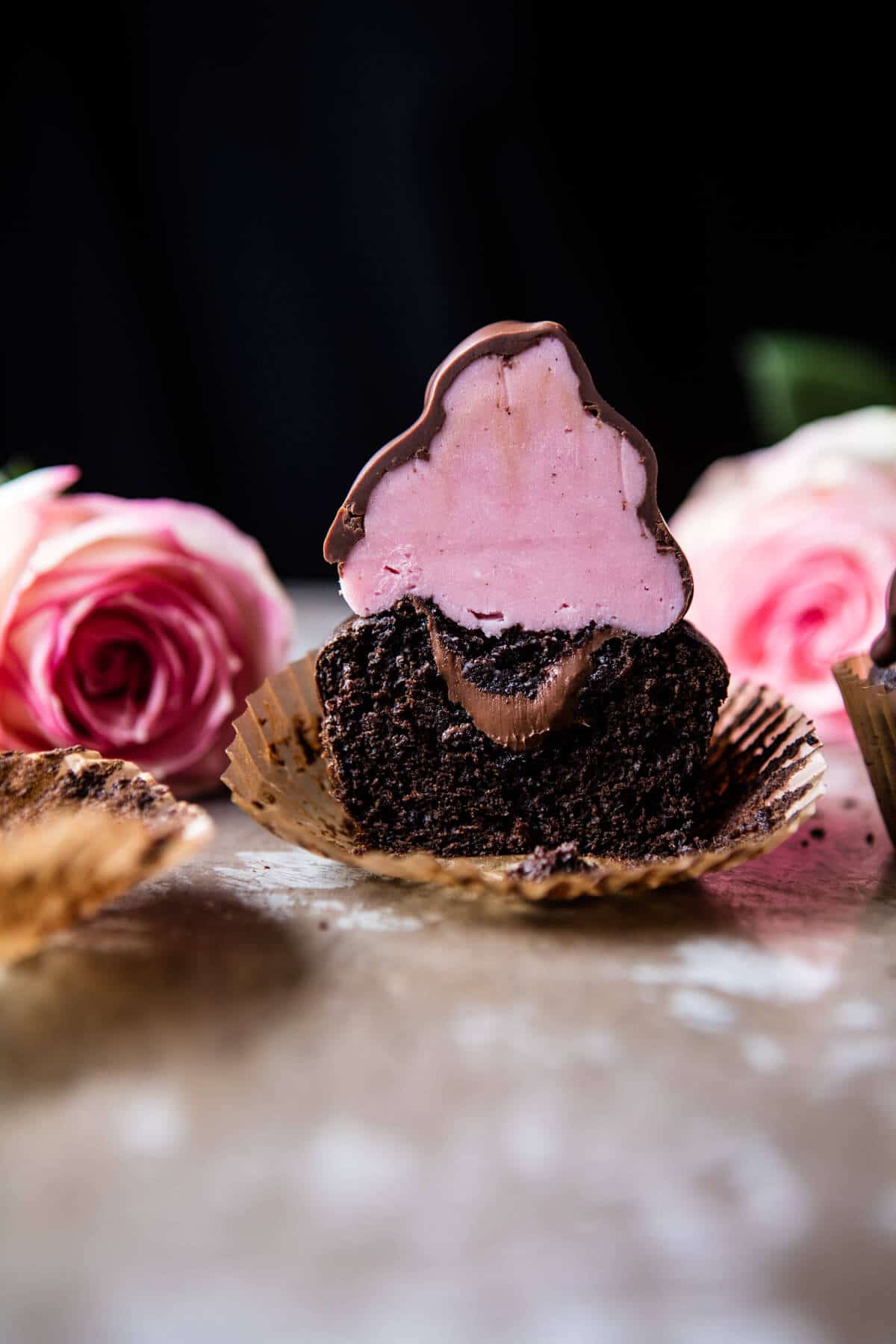 Ok, so while the pink buttercream is fun and all, the real deliciousness of this recipe comes in the form of perfectly light and chocolatey cupcakes that are then stuffed with a generous amount of Nutella. That combo right there, even without the buttercream is delish. Of course, they’re much better with buttercream, and even better than that when the buttercream gets dunked into still more chocolate.

Ahh, yes please. It’s true, high hat cupcakes are the ultimate cupcake, and I am pretty sure I could not think of a better sweet treat to bake up this month. Even if you’re not a V-Day celebrator, bake them up because you love and appreciate chocolate. Or maybe because you just need a fun new cupcake! Or maybe you have a birthday this month (my family has two). Or maybe you just need a fun way to celebrate something special? Either way, you just have to make these. Again, cake, Nutella, buttercream frosting, and chocolate coating. Yes, please! 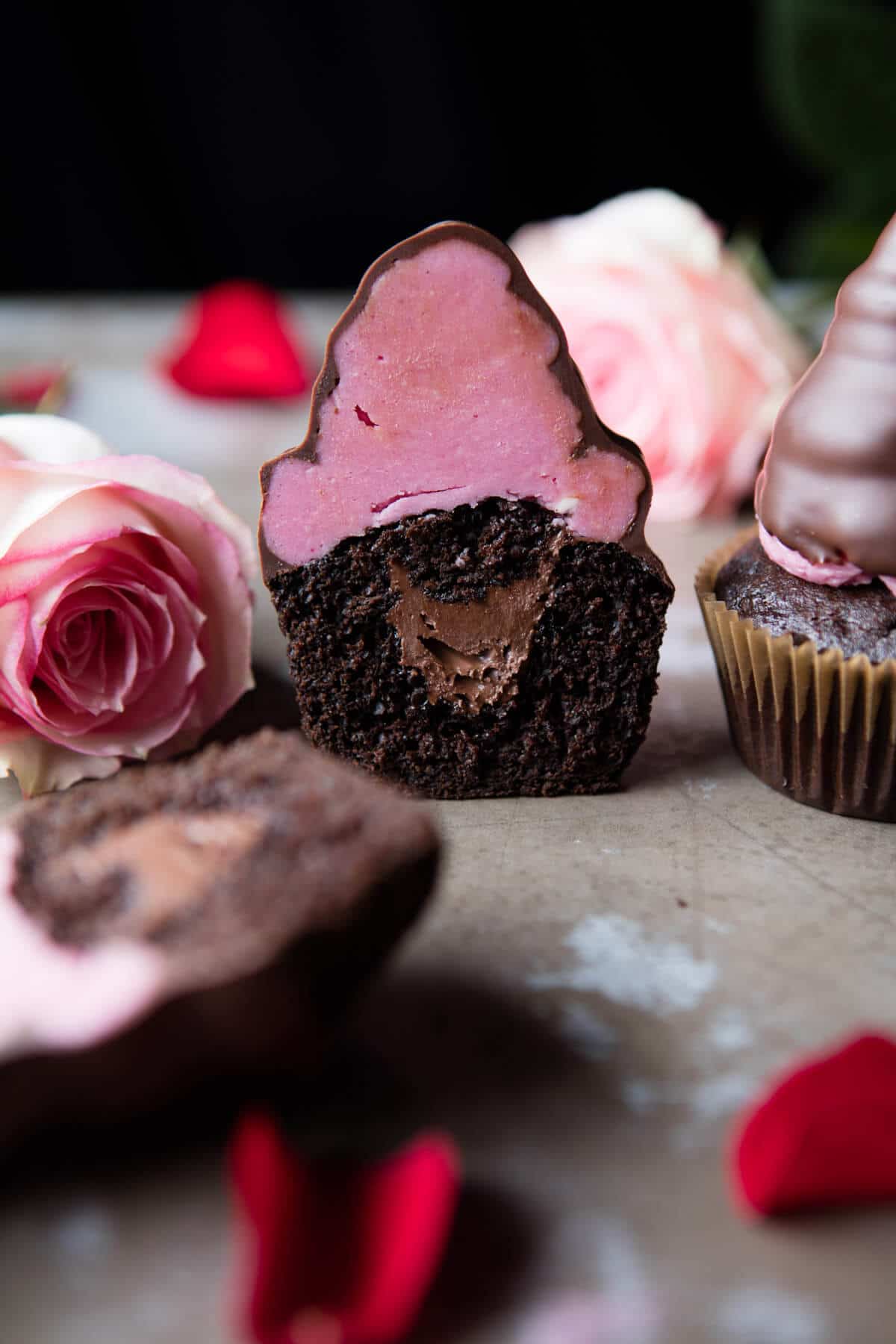 *To quickly bring eggs to room temperature place them in a bowl and fill with warm water. Let sit for five minutes.
View Recipe Comments 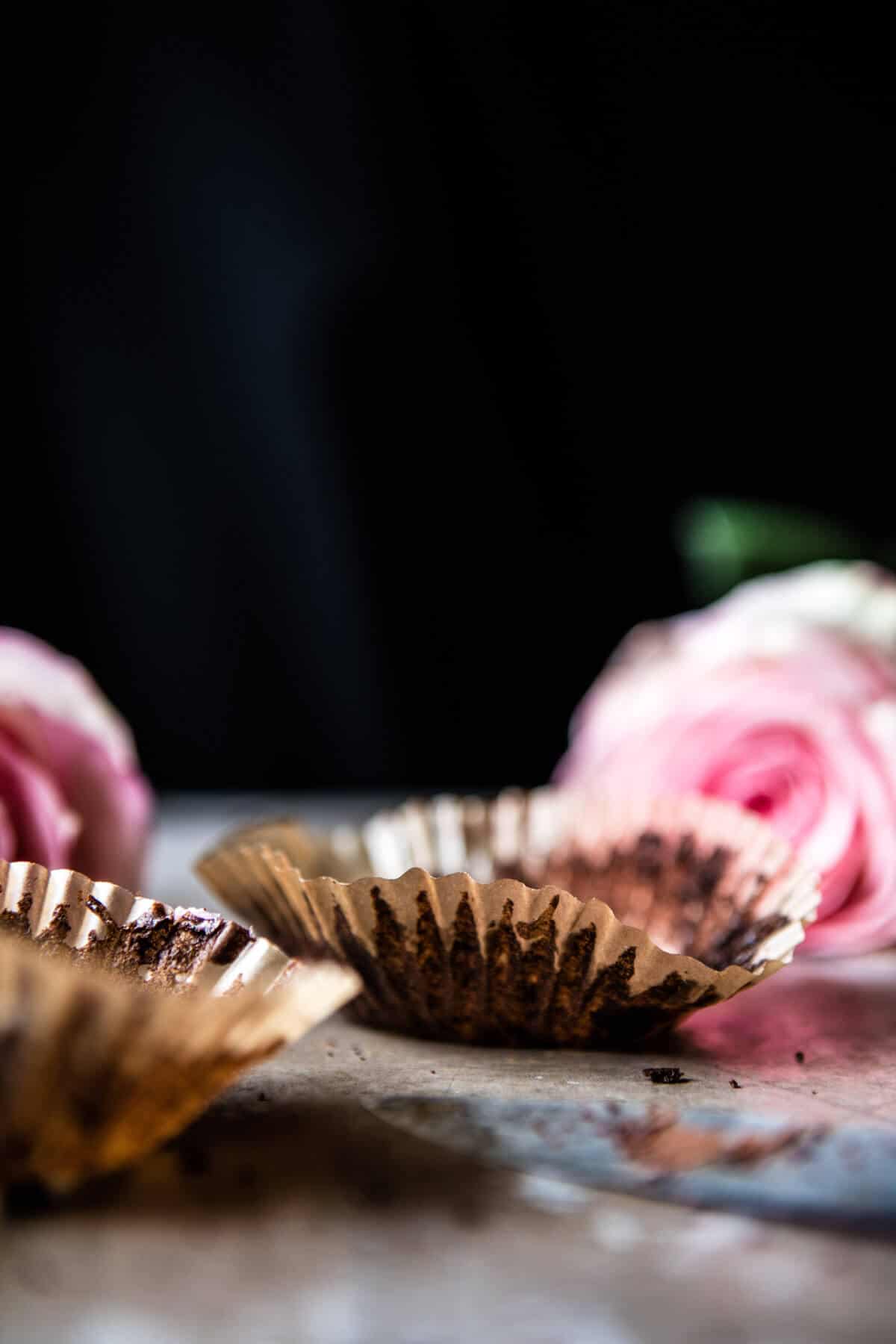 Seriously though, that Nutella center? The best! 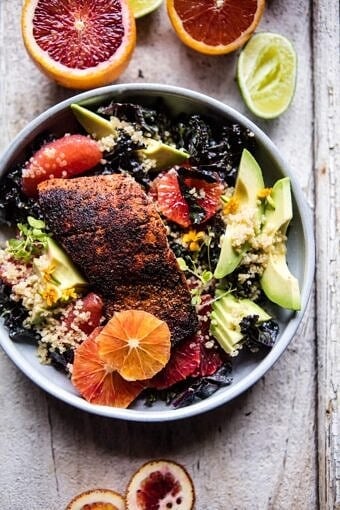