With pineapple and all the good things in life. 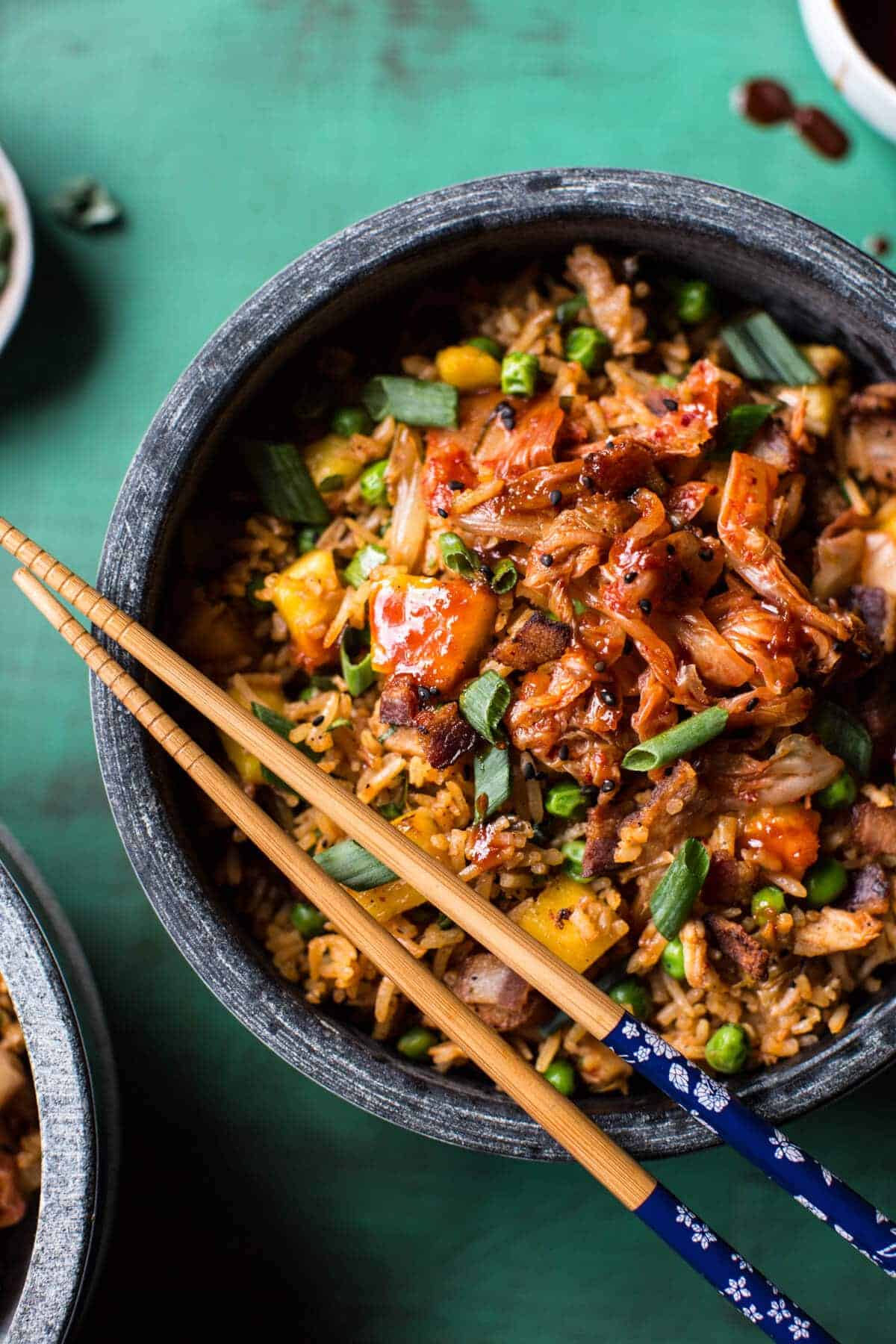 Okay, so not ALL of the good things, but a lot of them. This fried rice is pure comfort food. Think take out, but made healthier…and better…and at home.

Chicken, bacon, pineapple, RICE and Korean BBQ sauce, aka – really freaking good food! And good food that’s FAST. Like faster than you could call up your favorite fried rice place, order and have it picked up.

Do you guys remember your first experience with fried rice? For some reason it’s one of those memories that’s stuck with me. I really don’t know why, it’s not like it’s some amazing story, but I just remember eating it and thinking “I don’t really know what this is, but it’s soo good”. It was Christmas Eve. I know, really odd time to be eating Chinese take-out, but my mom was getting ready for her annual Christmas Eve dinner. It was always a BIG dinner, some years she hosted over 40 people (we have a very big family!). Anyway, mom was running around like a mad women while us kids were probably doing everything in our power to work against her. We did that, not going to lie, my brothers were little devils growing up. I of course, was a little angel…right, right.

So someone had brought home Chinese takeout. Can’t say it was lunch time or what time it was, but it was time for me to eat! For some reason I’m thinking it was later in the day, like four-ish, because mom had hit her frantic “UGH…people are going to be here and the house is a mess” state of mind.

It must have been my oldest brother Creighton who brought the leftovers home because I think he was the only one with a license at the time. So what I remember is this: Trevor (second oldest brother) and I were sitting on the couch watching Pirates of the Caribbean, eating schezwan chicken and fried rice…with the vacuum running on FULL power mode. I mean, obviously, cause if you know my mom then you know she LOVES her vacuum, and vacuuming has always been part of her pre-company ritual. 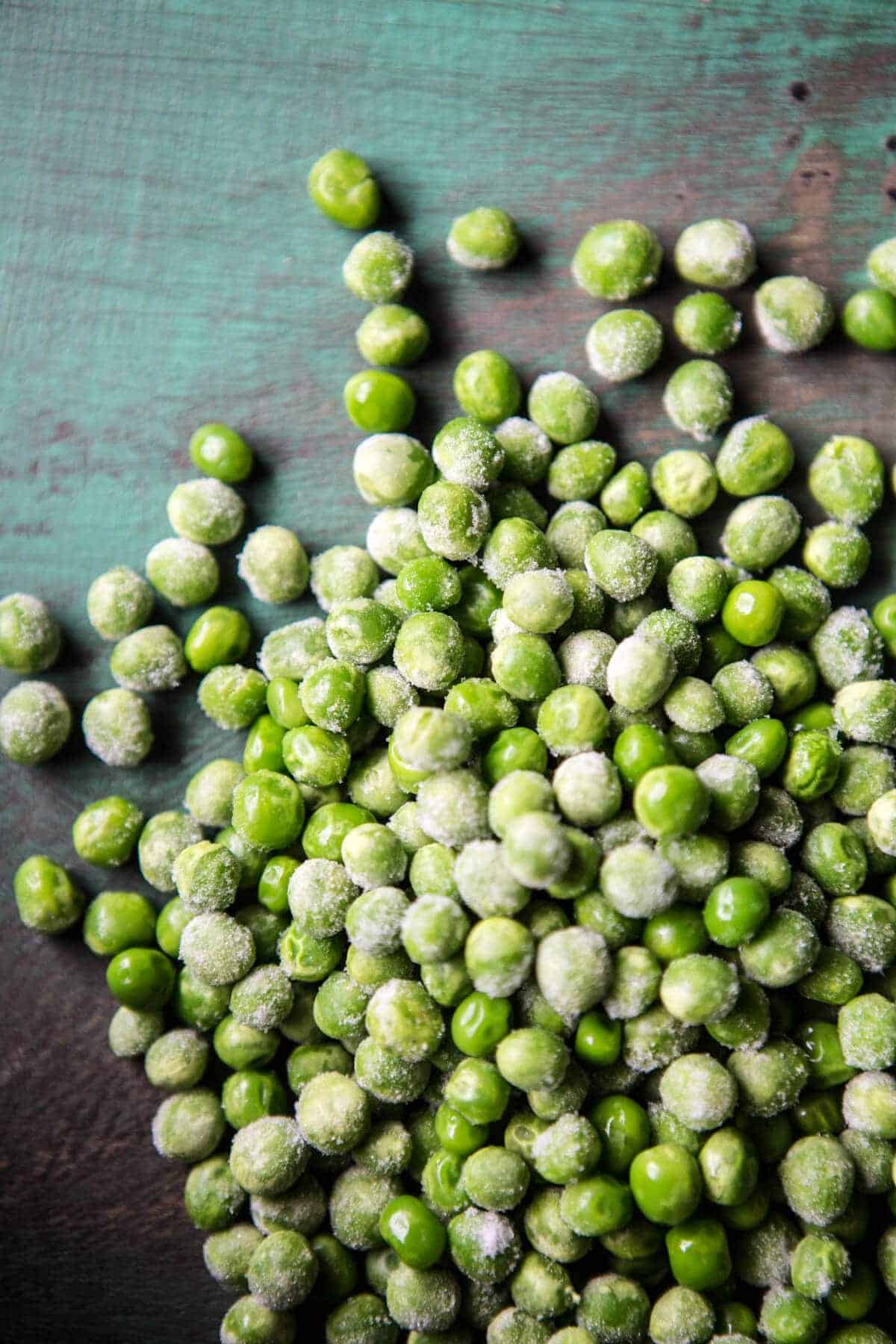 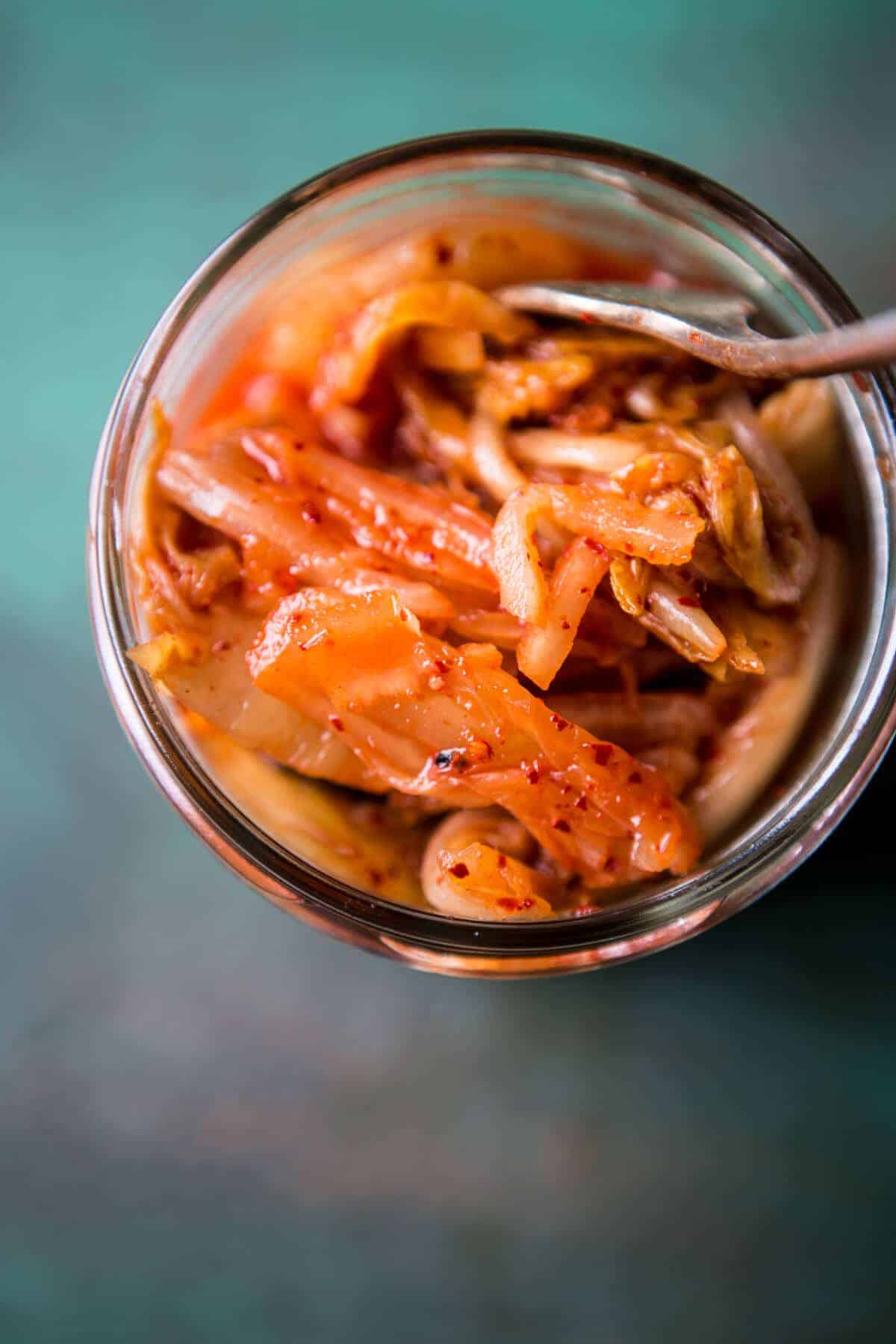 Pretty weird Christmas Eve right? I also remember zero snow on the ground and the sun shinning (complete opposite of our snowy Colorado Christmases). Must have been why I allowed Trevor to watch Pirates of the Caribbean and not The Santa Clause.

Although, I can’t lie, back in the day I really loved Pirates of the Caribbean. I mean, umm, Johnny Depp? I was a preteen, duh.

Anyway, my point is, that it was on this day that I fell in love with fried rice. Granted, today’s recipe is not for traditional fried rice, but it’s surely just as good, if not better!

It’s fast… as all fried rice recipes should be. All you need is one skillet, maybe a plate or two, a cutting board and a knife…simple.

If you wanted to make a vegetarian version, you could totally replace the chicken with tofu or chickpeas. You could also add coconut bacon. Actually that would be AMAZING, I wish I would have thought of it before! For real, the coconut bacon would be so, so good in this dish. Totally doing that next time…which will probably be tomorrow since I have a mass amount of pineapple that needs to be eaten. 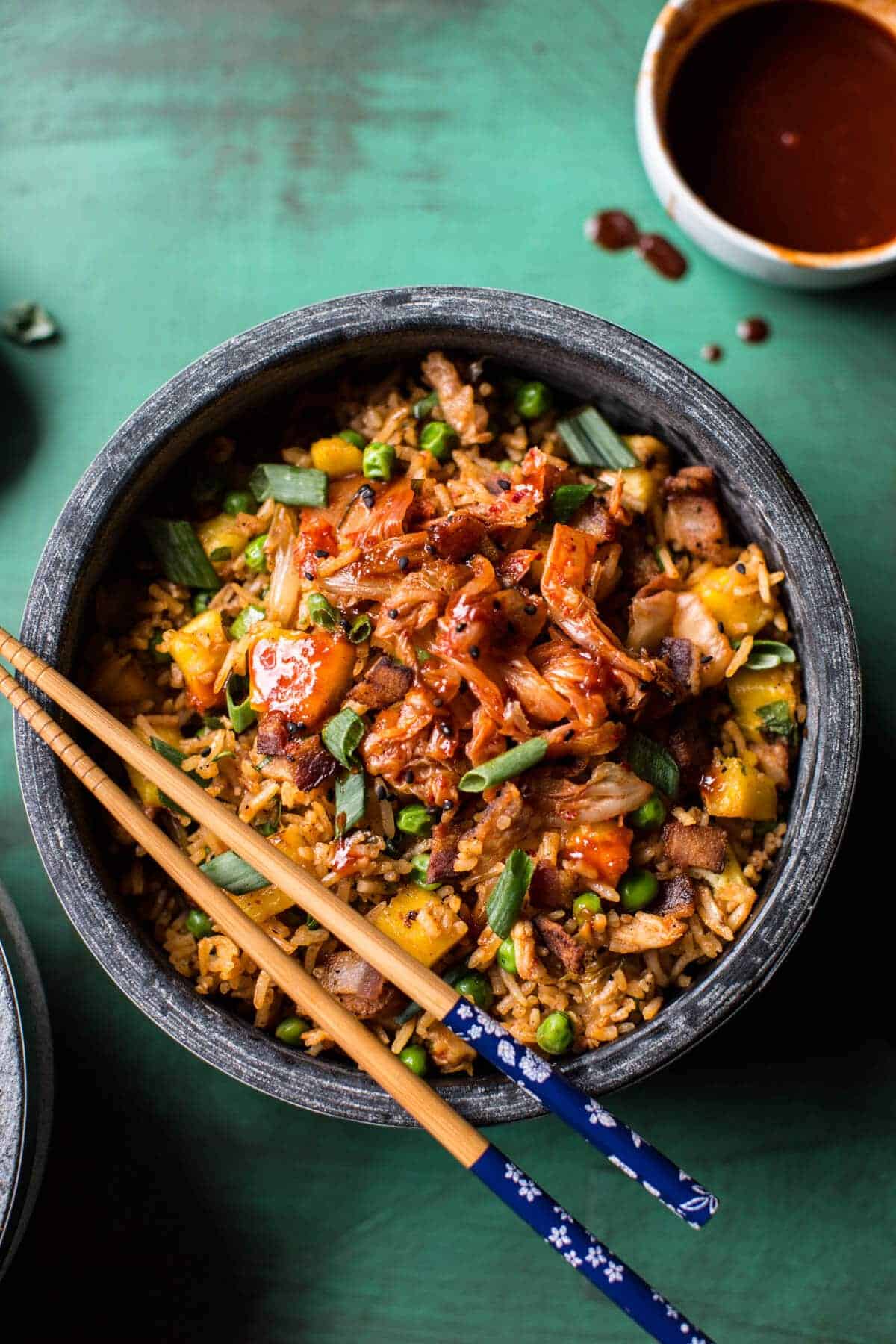 Maybe my next fake out take out meal should be schezwan chicken? I haven’t had schezwan chicken in SO long. Probably not since we lived back in Ohio and would actually get take out. Pretty sure my family has never had any take out since we moved to Colorado eight and a half years ago. Is that weird or what?

There just aren’t a lot of awesome places here, and OK, I kind of cook too much so there’s never really a need for it. And even when I don’t cook, there’s almost always something in the freezer from when I made too much food and no one was around to eat it.

So what do you think though? Schezwan chicken?? Yay? Nah?

Kind of liking the idea….thoughts?

For now, let’s just make this Kimchi Chicken and Bacon Fried Rice and have the happiest Thursday ever! 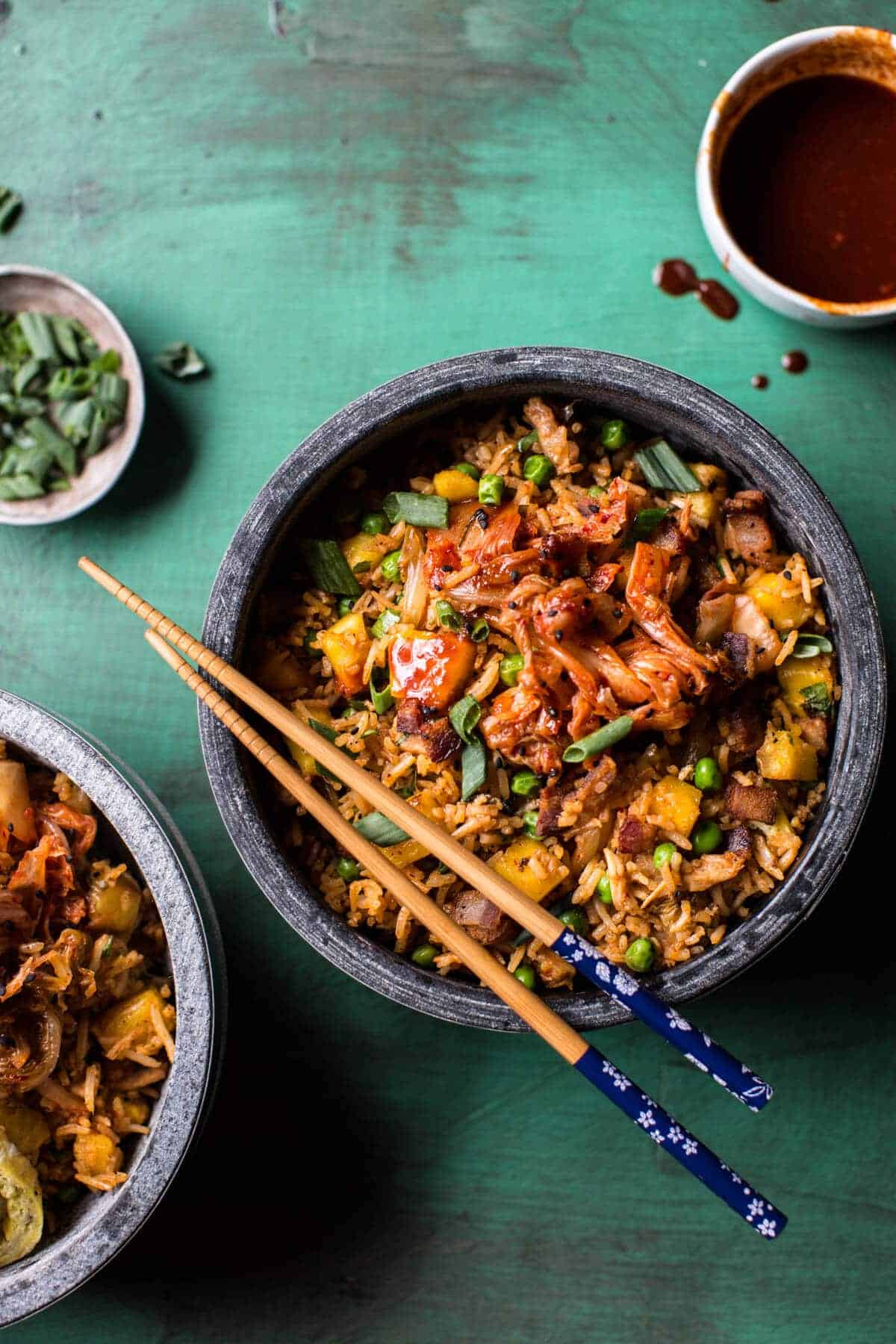 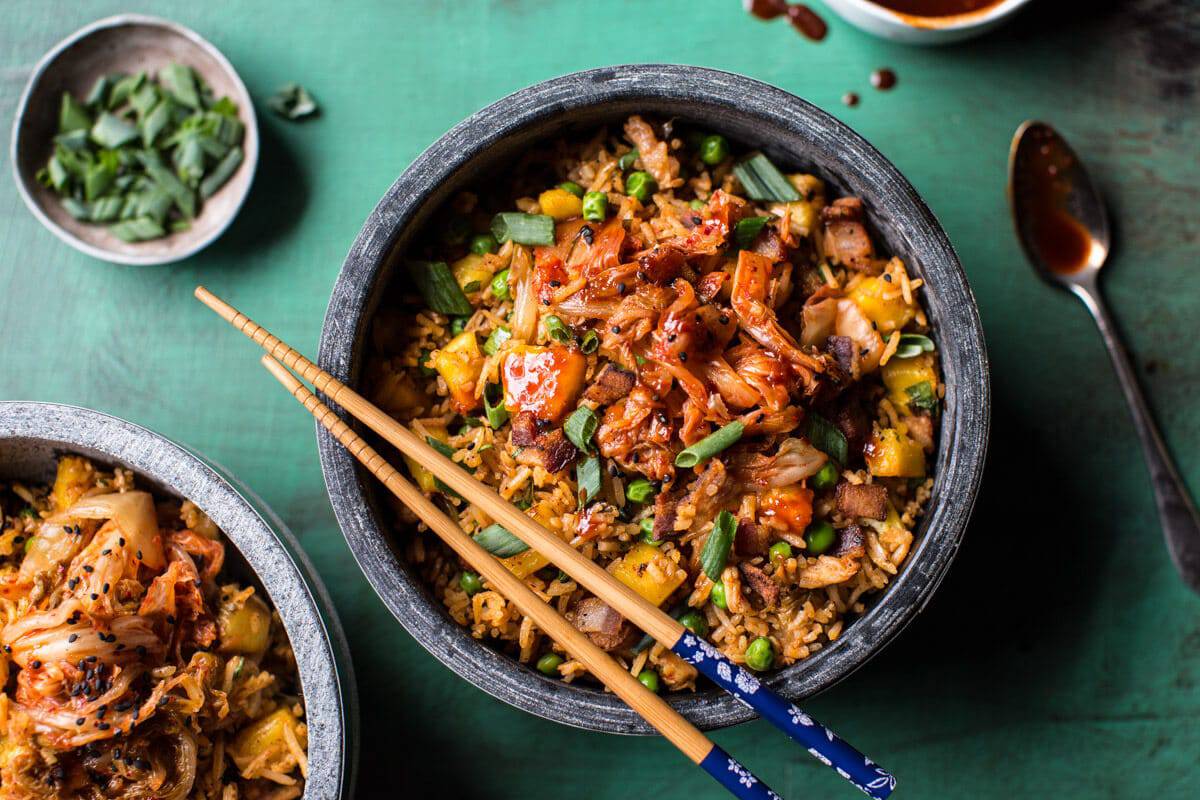 Cause I mean, if it’s Thursday, that’s sure to be followed by Friday, and that has me like ???!

PS. I am planning more videos for you guys and I would love to know if there are any recipes you would love to see me make?? Recipes already on the site and new ones!! Let me know in the comments!!! ? 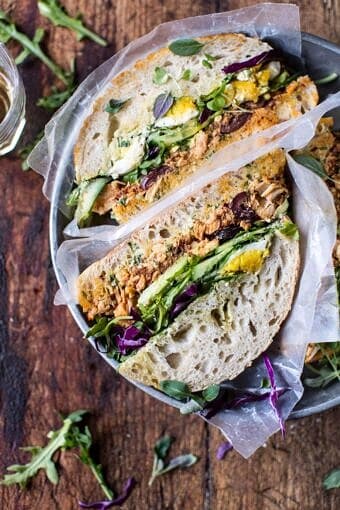