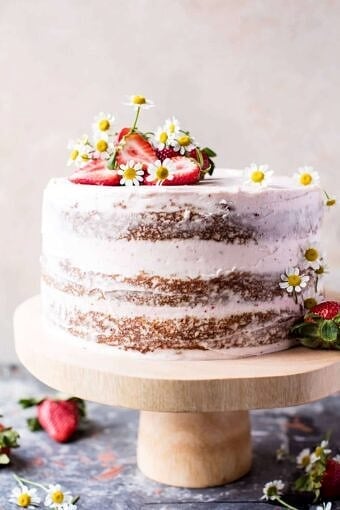 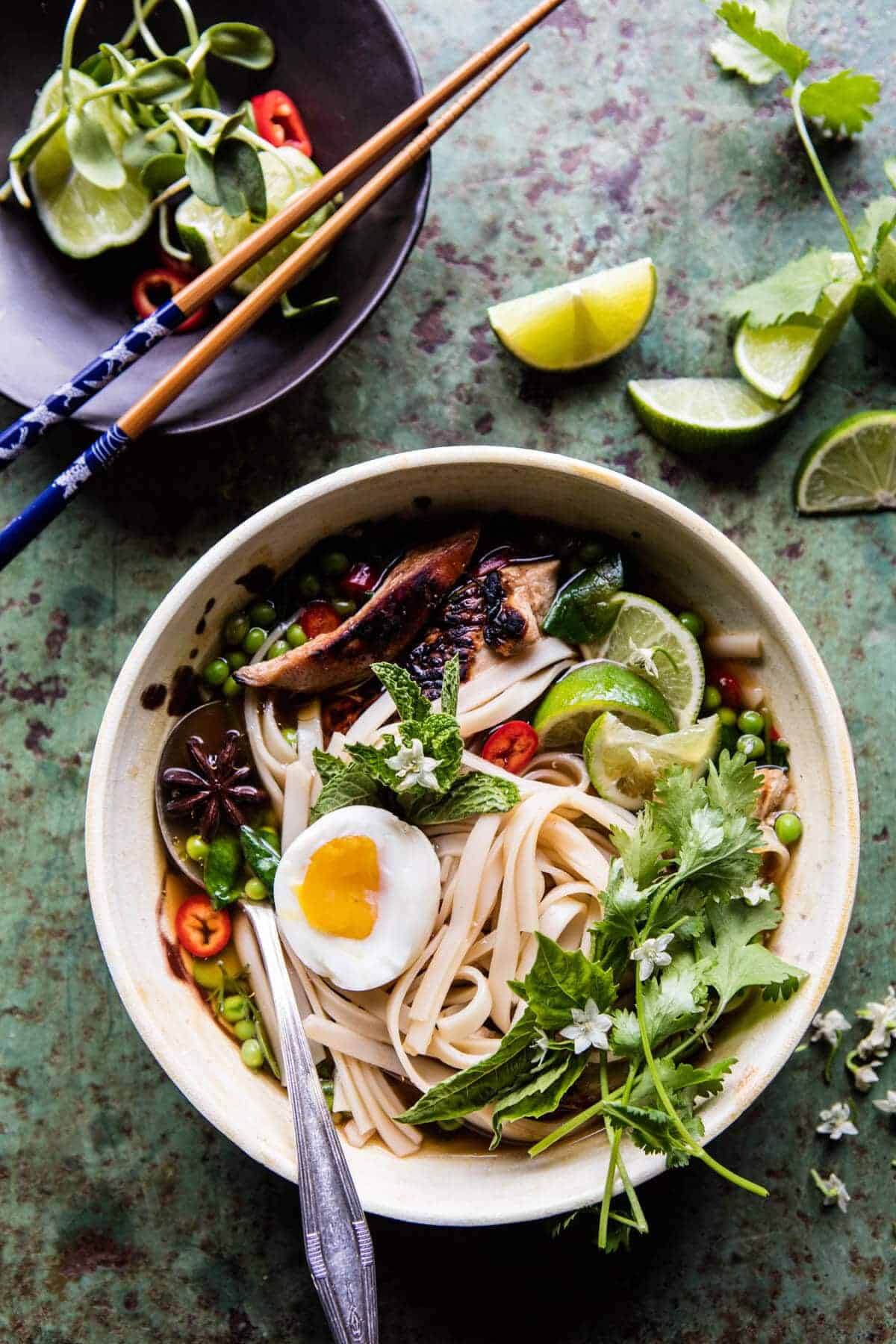 Because as I type this there is way too much snow falling outside my window, and you know…I am totally over it! It’s almost April and all I want is sunshine, and lots of it! Ugh, Oh well, I guess the good news is that it’s still very much soup weather, which is why I decided to share this quick and easy spring pho style soup!

Is anyone else feeling the need for a little springtime comfort food or what?

It’s Thursday, so my thinking here is that it’s the end of the week and we all just need an easy recipe to warm up to tonight. This is totally that recipe…plus, I mean, there’s noodles involved, and when are noodles not a good idea? 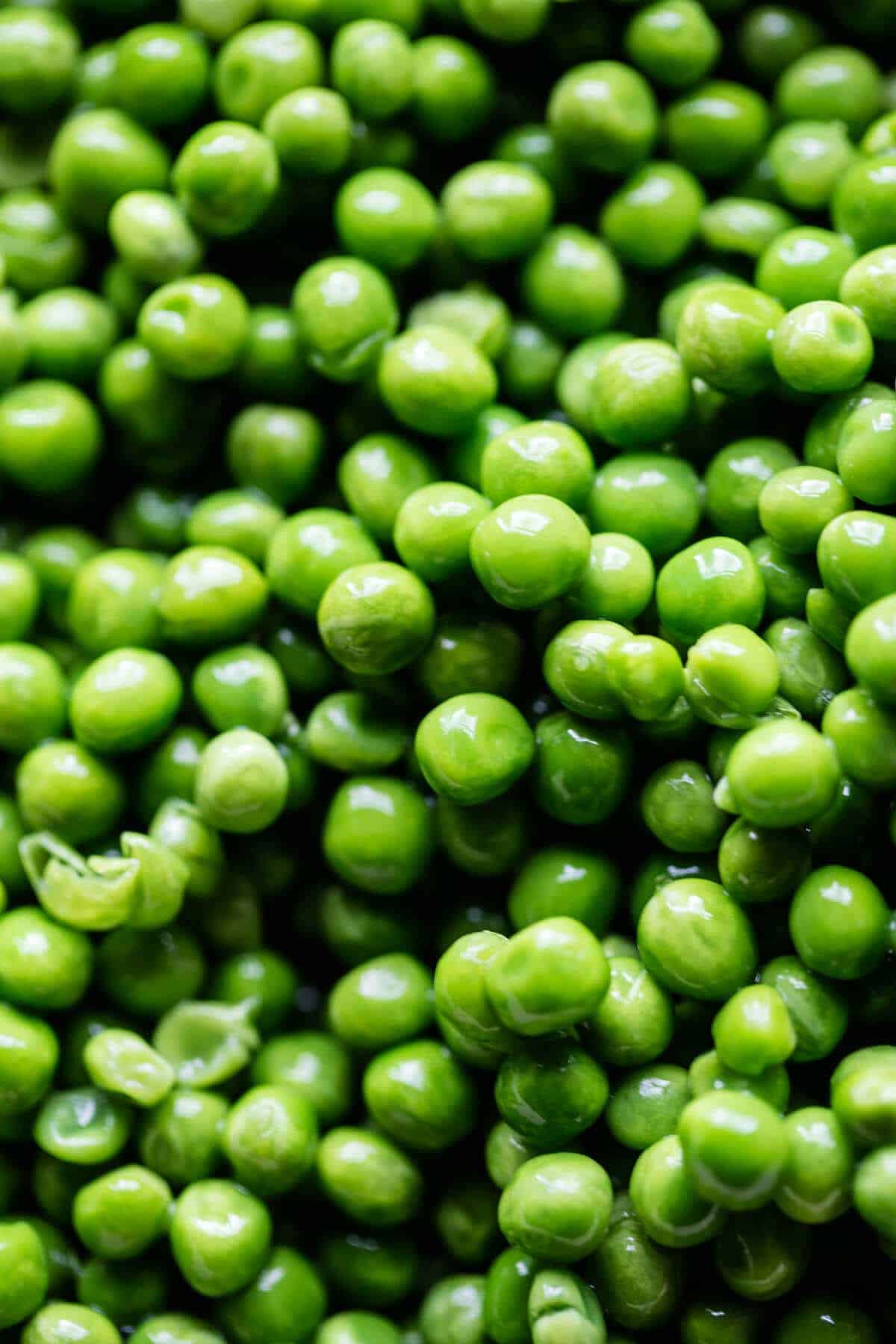 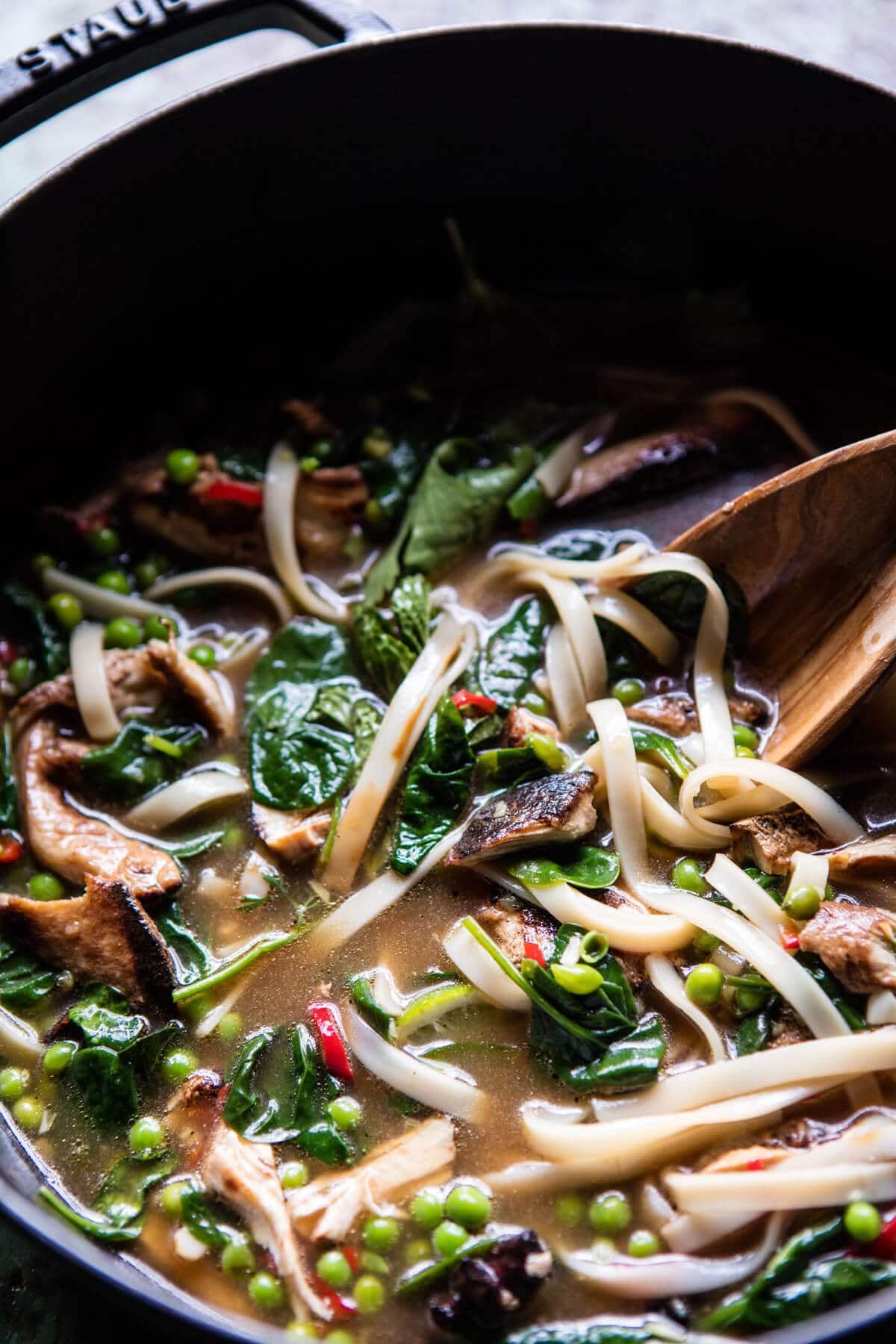 OKok, so I am going to get right down to the recipe today because well, it’s Thursday and my brain is feeling a little all over the place!

This soup was inspired by Pho. It has all things fresh, cozy and delicious. Honey caramelized chicken, sweet and spicy broth, peas, spinach, rice noodles, and topped with an egg (which is not traditional, but it just seemed like a good idea…when it doubt put an egg on it), sprouts, cilantro, and edible garlic flowers, because I’m obsessed with edible flowers right now.

Traditionally, pho is a slow simmered soup using beef and or chicken bones to create a delicious and super flavorful broth. As much as I love that idea, sometimes using store-bought broth is just about all I can handle…especially towards the end of the week…and especially after a week like this one, which was spent filming four to five recipes a day!!

The soup comes together all in one pot. Start out by cooking up the chicken with a little honey to caramelize it just a bit. Then add everything else to the same pot and simmer. I used two of my favorite spring veggies, peas and spinach, but really, you can use any combo of veggies you love, and or have on hand. Carrots, mushrooms, bok choy, kale, and bell peppers would be awesome with this soup! Most important here is the broth, noodles and that honey caramelized chicken. <–so good.

This soup is very easy and simple, but still so flavorful and delish! 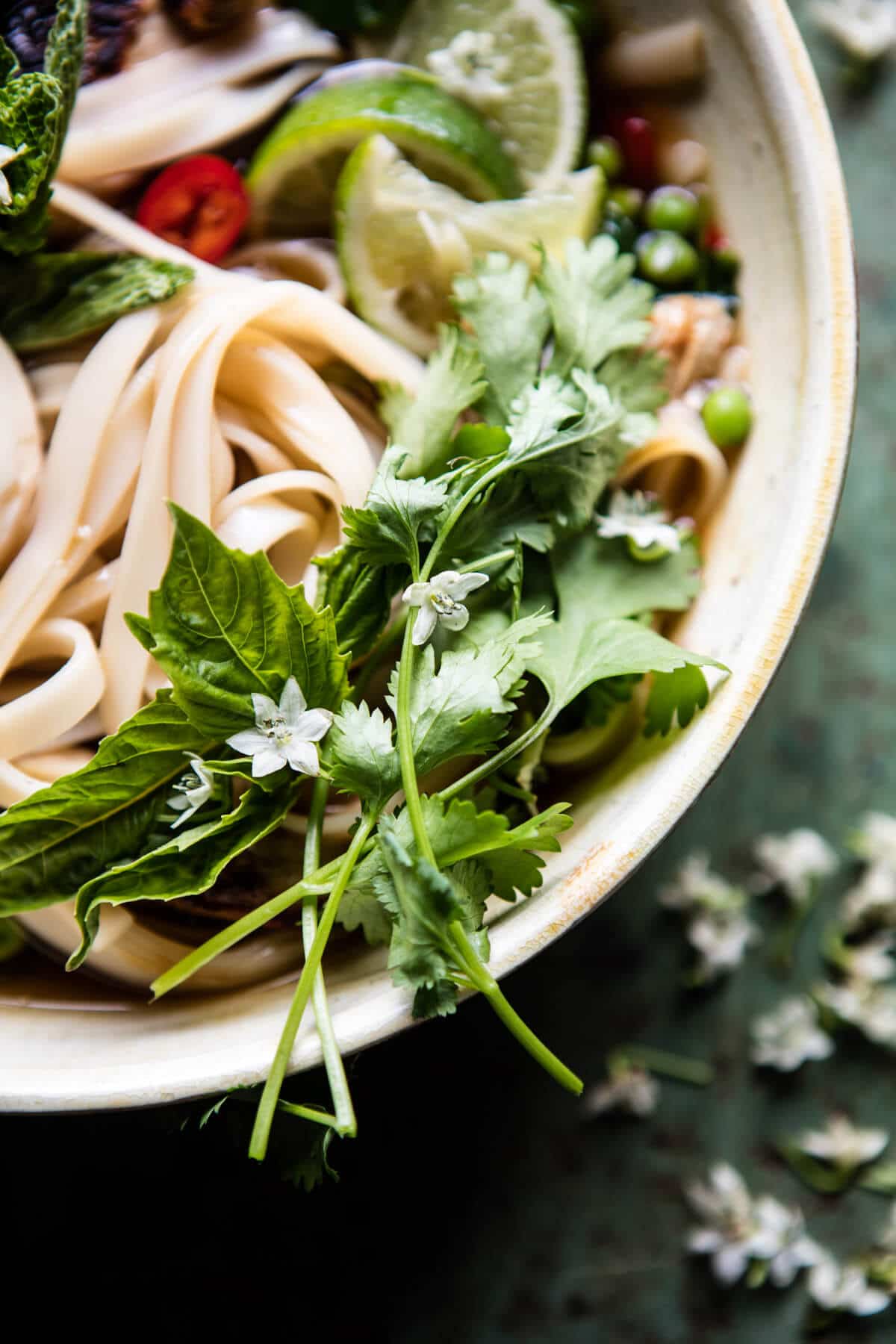 In other random news, it’s been a pretty great week over here! Lots of fun working away in the kitchen and actually having someone around to chat with while I work. Typically it’s just me, my camera, and a lot of food, but with my brother here filming this week, its been a nice change of pace, which I think was very much needed. I love when work doesn’t actually feel so much like work, it makes the day fly by.

Kai is flying out of today, he’s headed to Cleveland for his girlfriend Cait’s birthday, but he’s leaving behind plenty of new recipe videos…which I am very excited about!

But first! A little (cheaters style) pho soup for dinner! 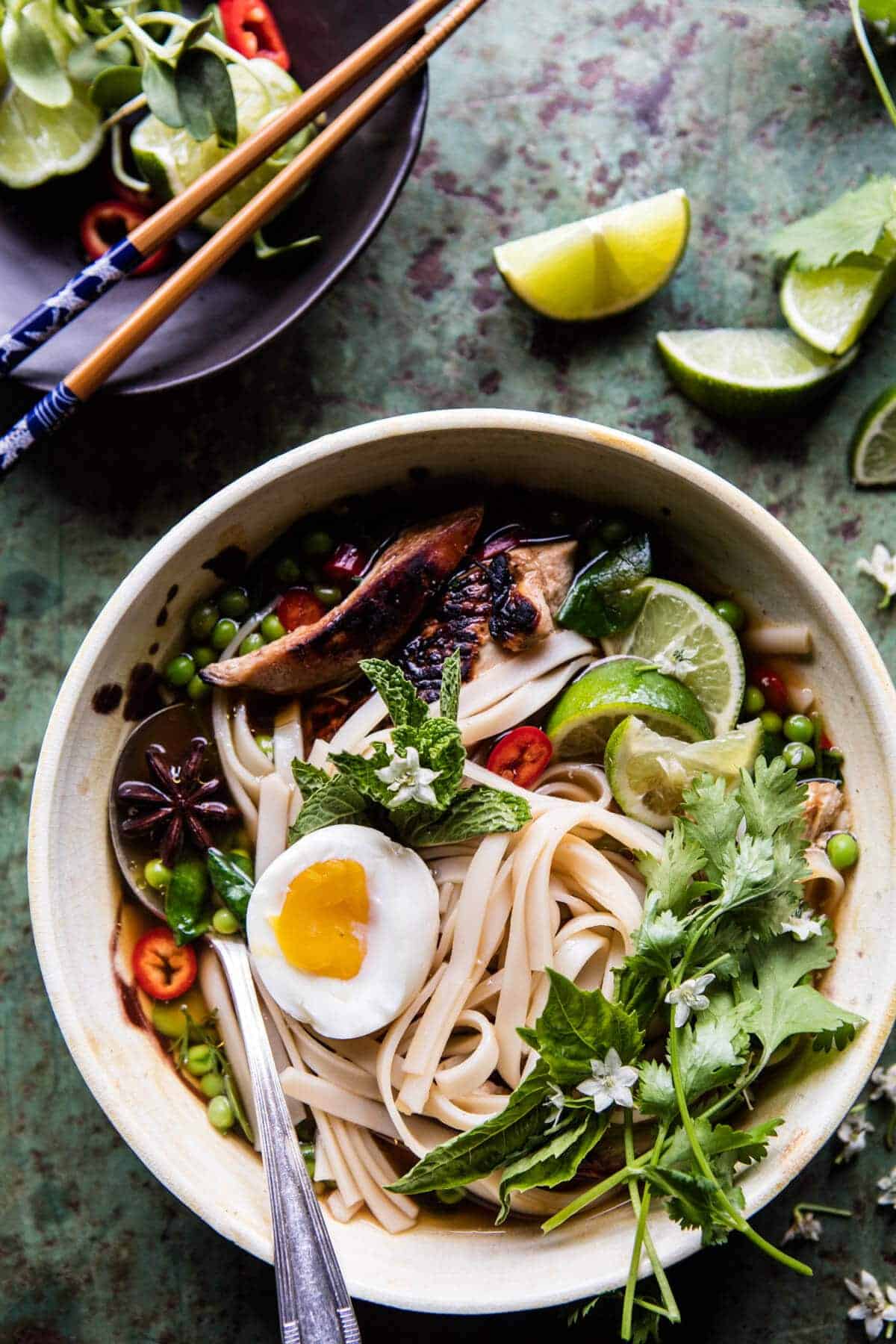 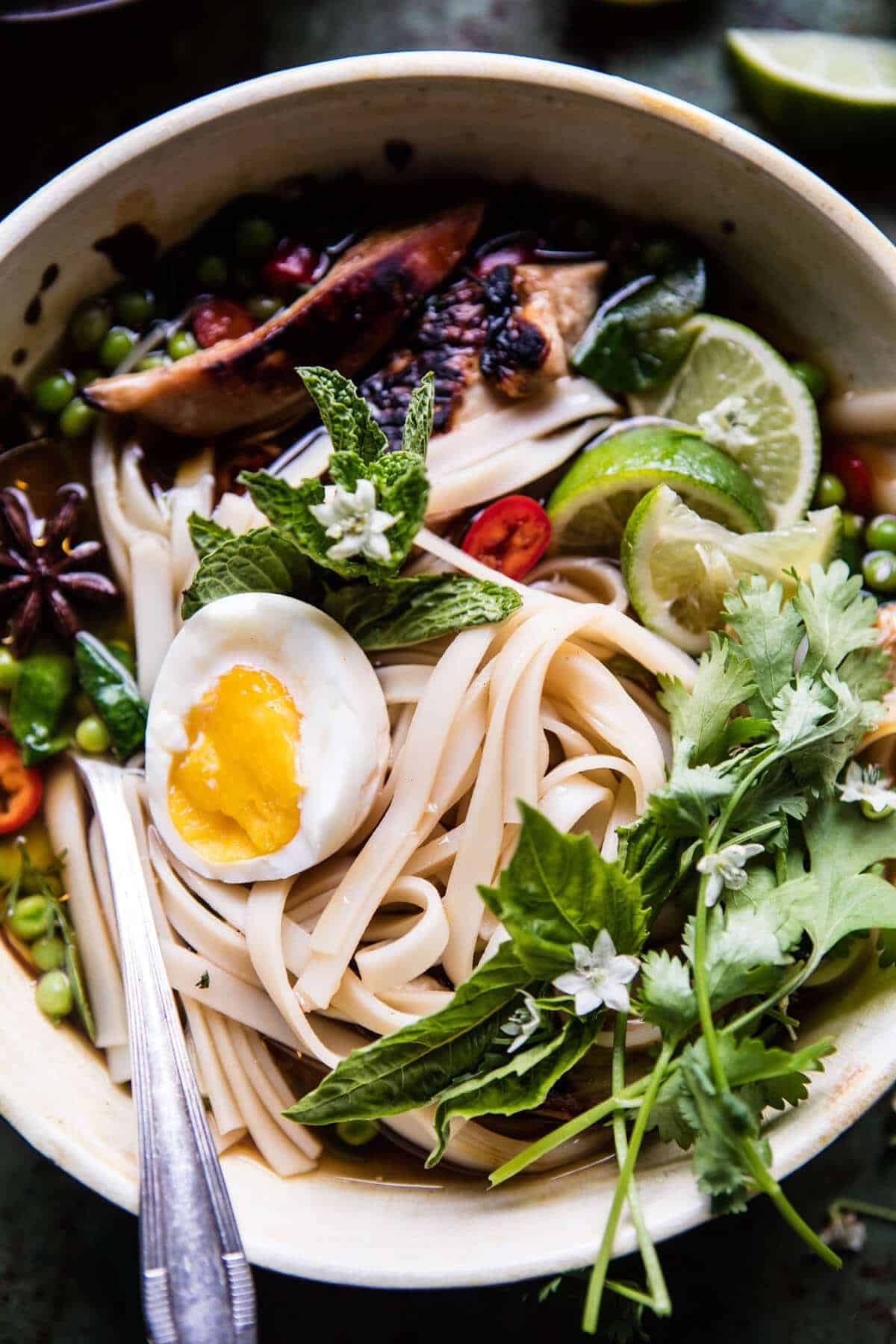 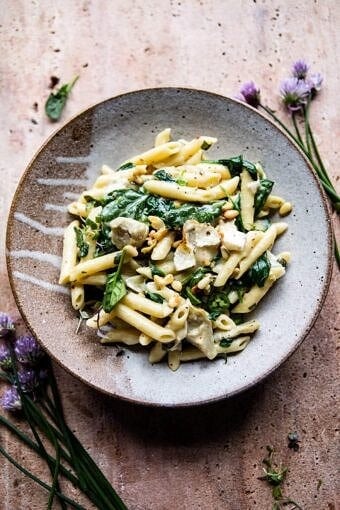