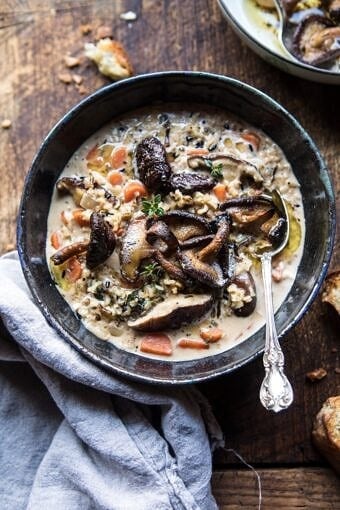 Skillet Roasted Moroccan Chicken and Olive Tagine…because we still need a good, easy, healthy dinner to eat in the days leading up to Thanksgiving. 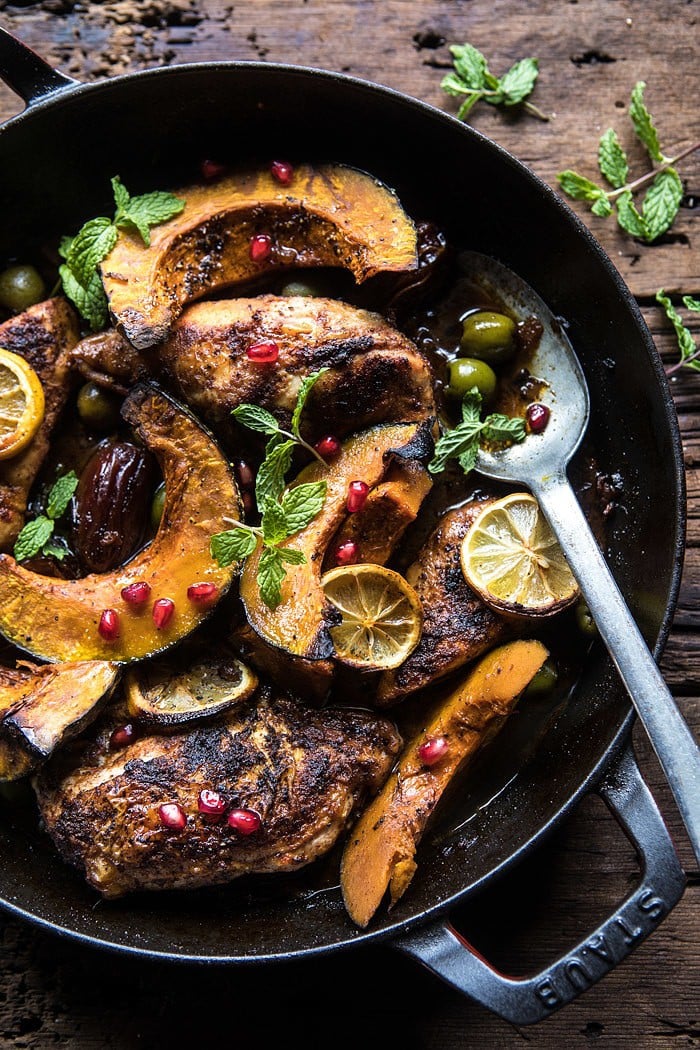 I know, I know. Thanksgiving is in t-minus eight days and I should probably be telling you about a stuffing recipe or an easy appetizer right about now, but do you want the truth?

I have a stuffing recipe that I love and have no interest in creating another one, and okay, I am slightly over the Thanksgiving recipes. All of my favorites have been posted (see my 2017 Thanksgiving menu and guide here) and at this point I am feeling pretty ready (and excited) for Turkey Day. Of course I have a couple more recipes coming your way later this week and early next (I mean, you know me, I couldn’t leave you hanging without those idiot proof last-minute recipes), but in the meantime I’m feeling like a good dinner is in order.

And this chicken? Trust me it is GOOD.

Here’s the preface to this recipe. My brother, Brendan and his girlfriend, Lyndsie where recently in Morocco, it was their trip that inspired me to create this simple recipe. They kept sending me photos of these incredible looking, veggie filled Moroccan Tagines that they were constantly eating during their time there. I’ve always loved the flavors going on in Moroccan style food, so I thought I’d make my own simple version of the dishes they were eating. 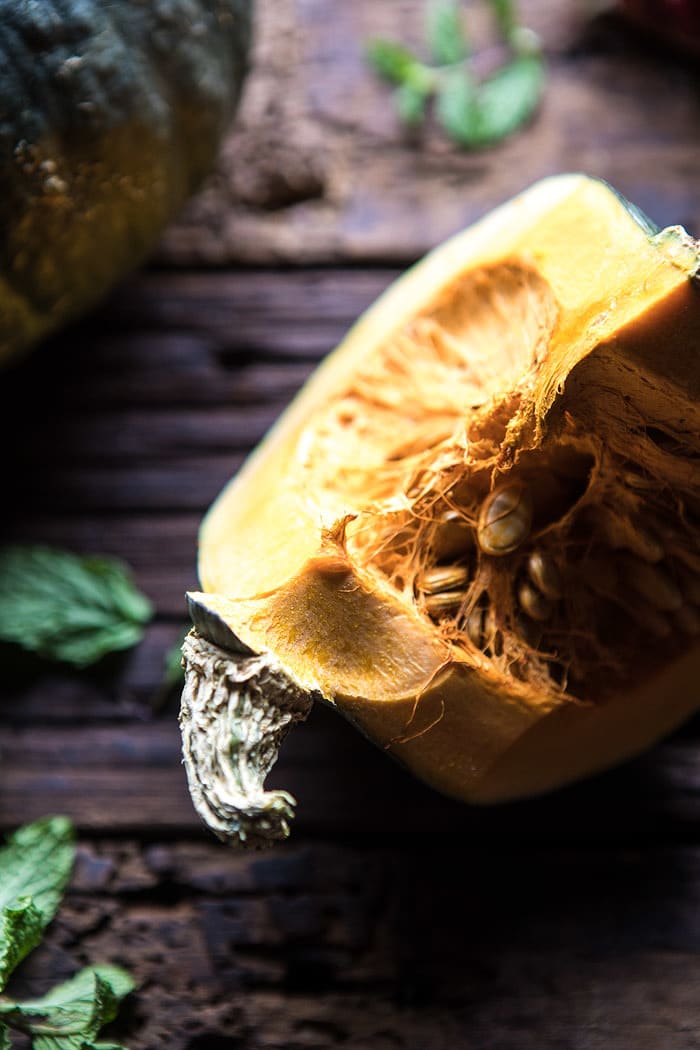 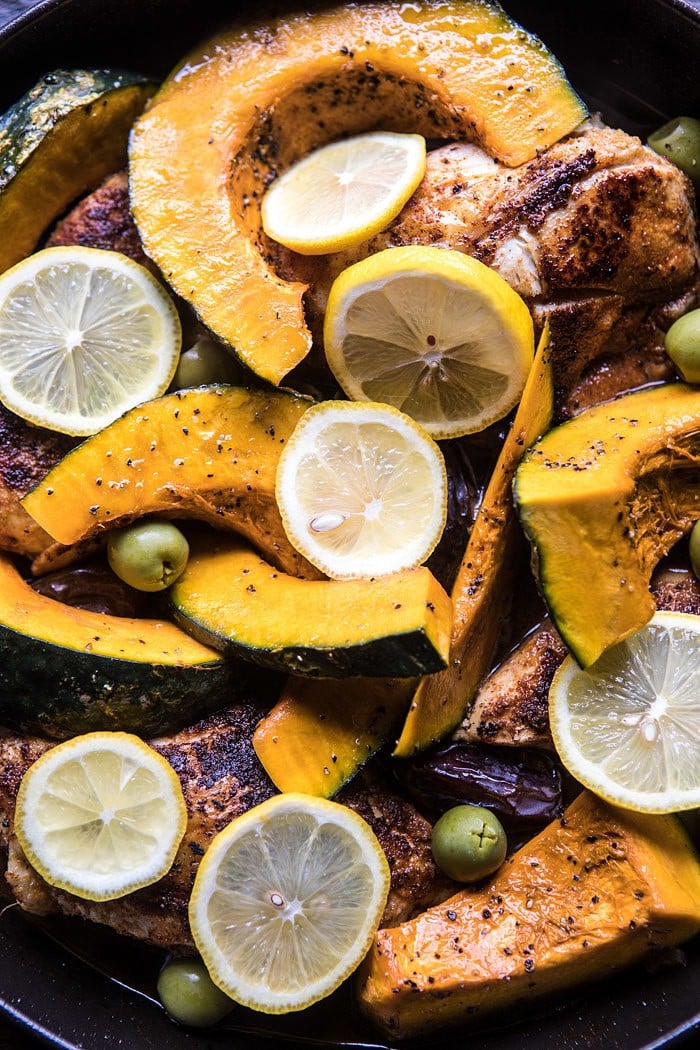 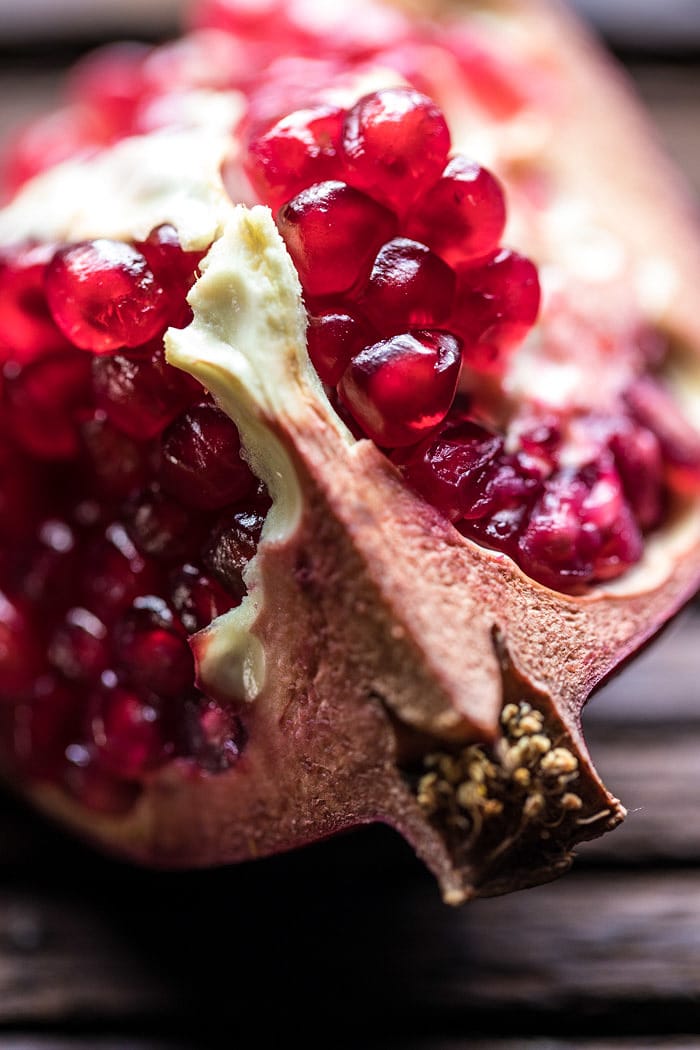 Originally, when I set out to make this recipe I was thinking of doing a veggie based Tagine. From what Bren has informed me, veggie and lamb Tagines are of the most common in Morocco. I didn’t want to use lamb since it’s a little pricy and requires a longer cooking time, so I thought I would just do a veggie dish.

That is until the skin on, bone in chicken breasts sitting in my fridge screamed at me to roast them up in Moroccan spices. I just couldn’t ignore their screaming, so I seasoned them up, seared them in a skillet with my favorite Moroccan spices and then finished slowly roasting them in the oven alongside some kabocha squash, olives, and dates.

About forty or so minutes later the house smelled incredible and I had the most gorgeous, skillet roasted chicken dinner in front of me.

I kind of love when I start out to make a recipe a certain way, but then change it entirely, and that said recipes ends up being one of my favorites ever. This doesn’t happen every day, but when it does, I get a little too excited.

PS. in the last couple months I’ve decided that skin on, bone in chicken breasts are the most flavorful way to cook chicken breasts. The taste is not even comparable to boneless, skinless breasts. 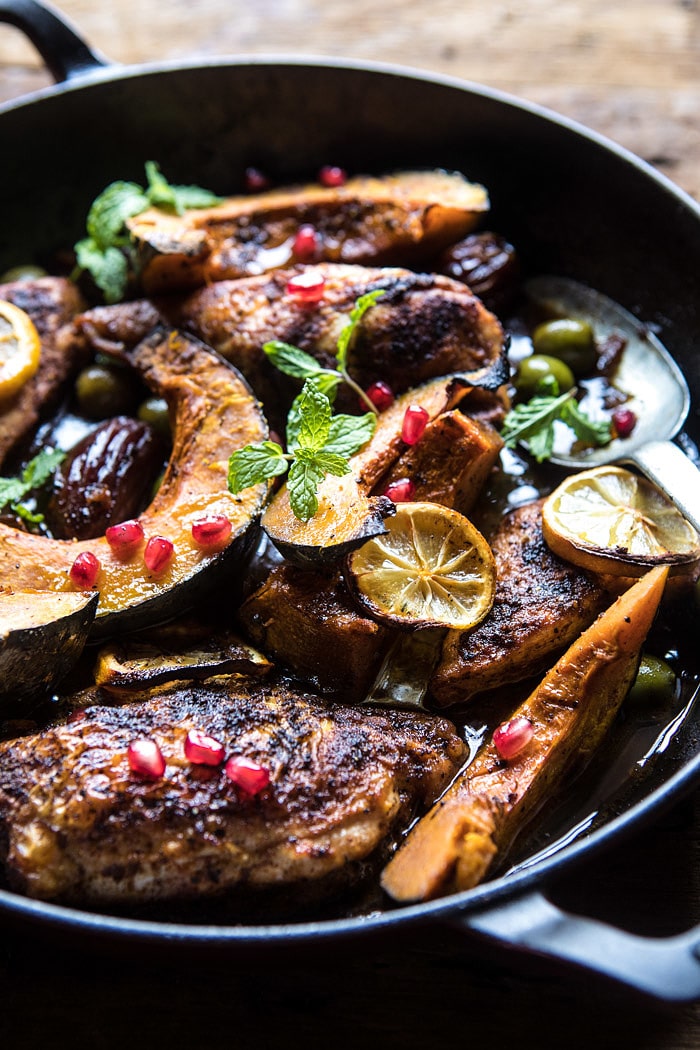 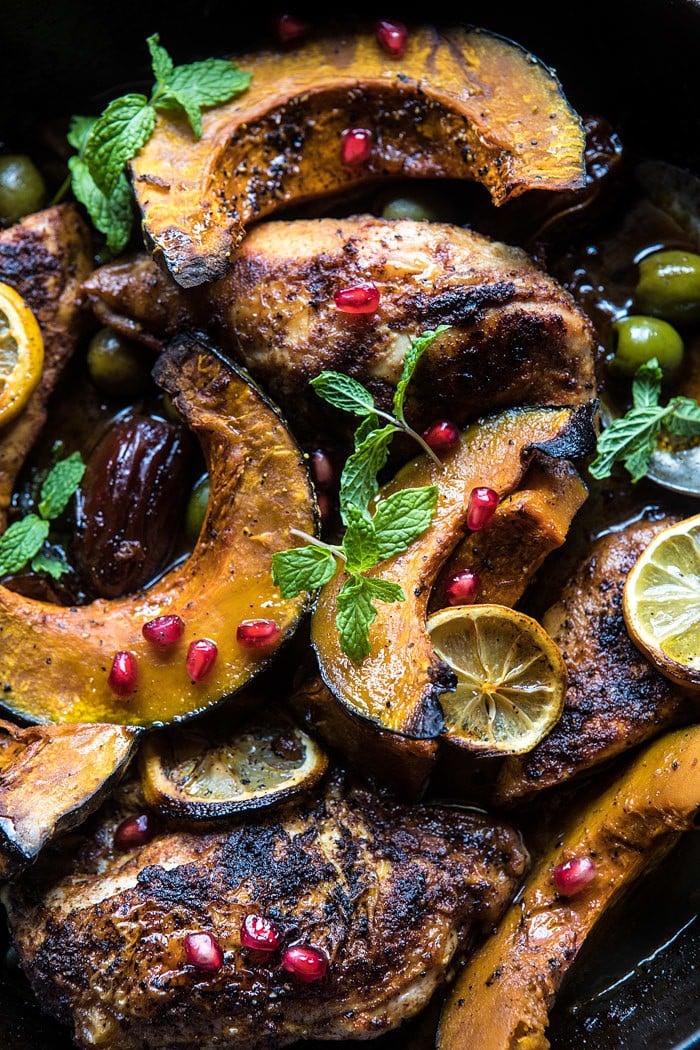 This chicken is fall off the bone tender, seasoned with smoked paprika, cumin, and a little cayenne for heat, and then slow roasted in chicken broth. The broth keeps the chicken moist and makes for a for a nice pan sauce. I really wanted to create a one-pot style meal, so I ended up just tossing my squash in right alongside the chicken. Not only does this make for quick and easy clean up, but the squash gets roasted in the chicken fat, which makes for the most delicious veggie side.

To round out the dinner, I added olives for saltiness and dates for sweetness. Both are extremely traditional in Moroccan cooking, but really, I just love that sweet and salty combo…but you probably already know that.

If time allows, I would recommend cooking up some couscous while the chicken roasts. Rice and quinoa would both be great too.

Oh, and I wouldn’t judge if you wanted to sprinkle over a little goat cheese. In fact, I’d think that was pretty genius. 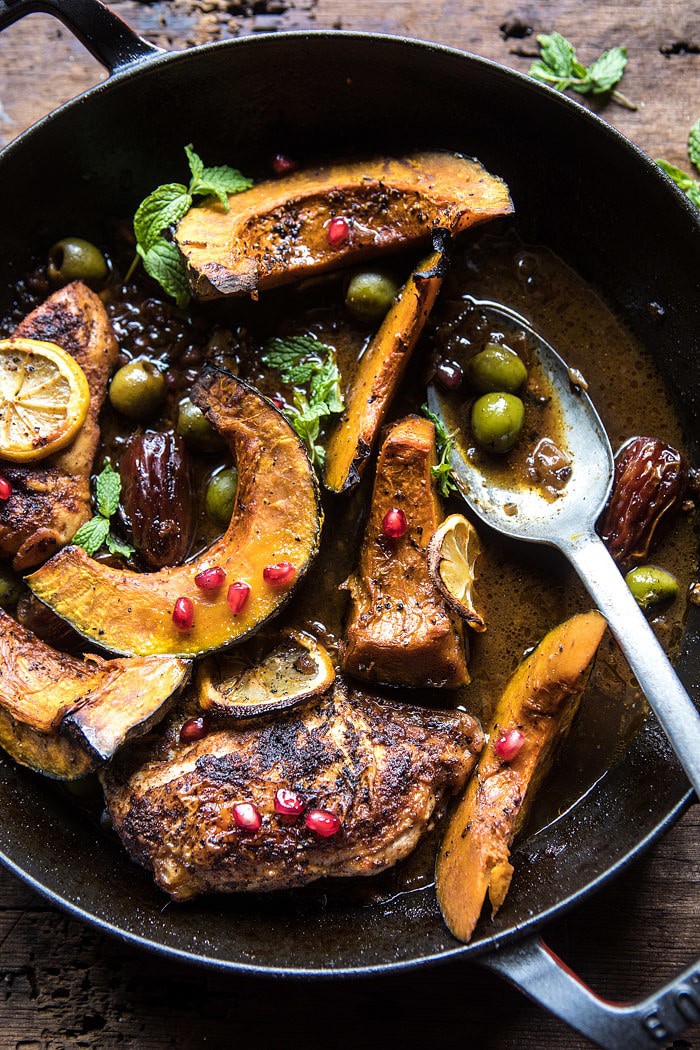 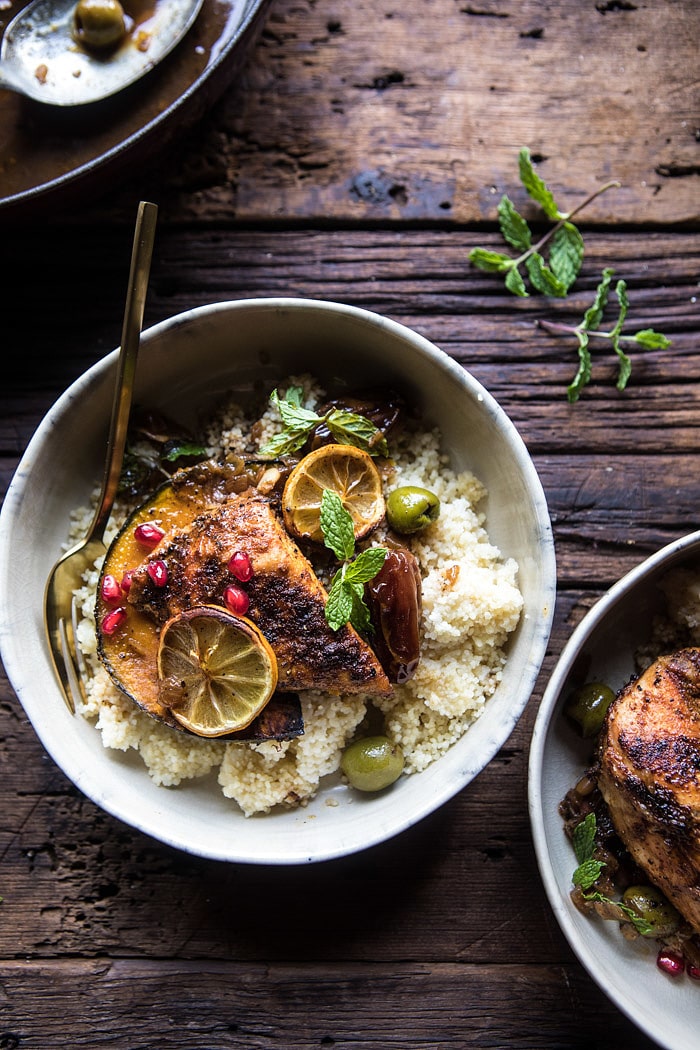 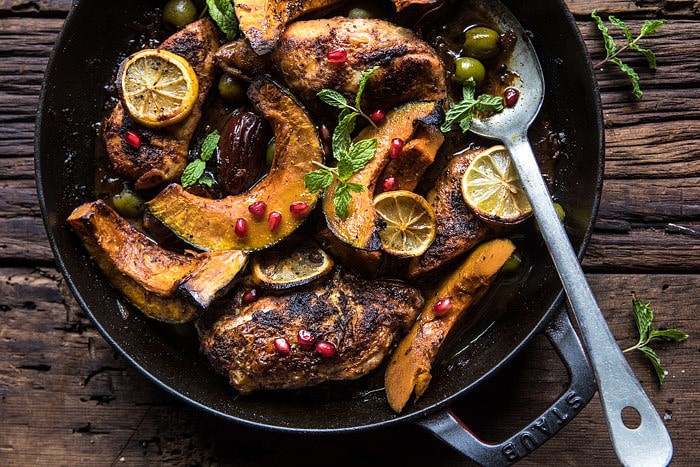 What chicken looks like when it’s delicious…and not boring. 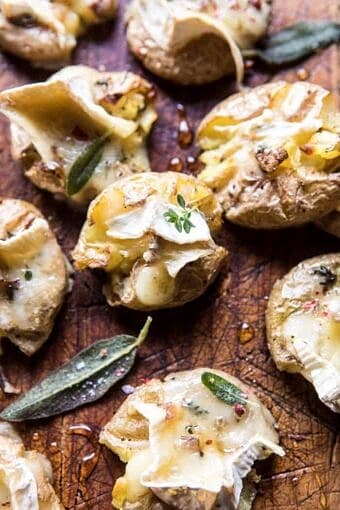