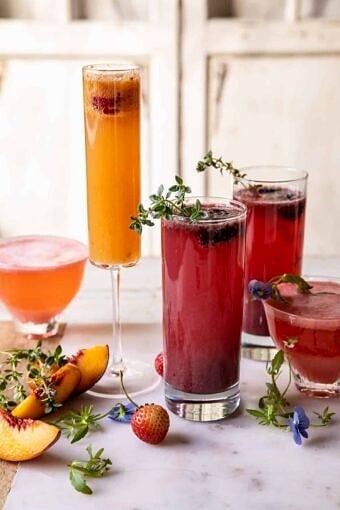 Skillet Cinnamon Sugar Peach Upside Down Cake…because it’s Friday, and it’s summer! You don’t need to be a skilled baker to bake up this deliciously simple peach upside down skillet cake. This upside down cake has a show-stopping look, but only minimal effort. With fluffy vanilla cake made with browned butter, and caramelized cinnamon sugar-coated peaches, every bite is insanely delicious. Enjoy this peach cake warm, right out of the oven, with a dollop of vanilla bourbon cream. Roll your eyes back delicious! 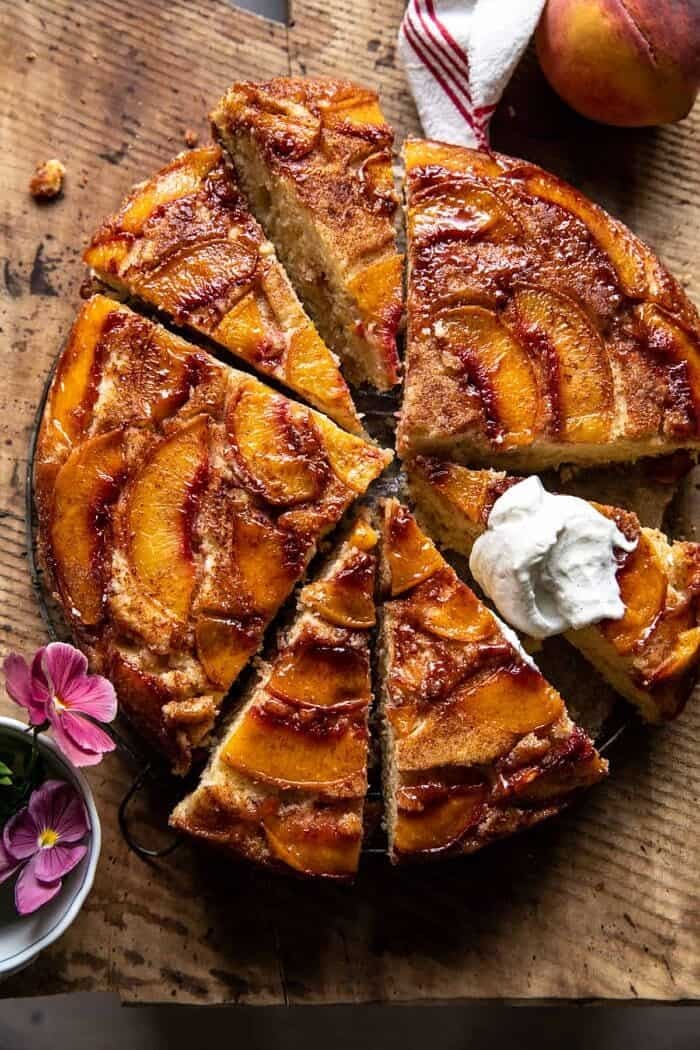 Well, would you look at that, I finally have a peach recipe for you guys. And even though this cake took me a while to create, I couldn’t be happier or more excited. This cake is without a doubt one of my favorite ways to bake with peaches.

It is DELICIOUS…and super simple.

And just the kind of cake we’re looking for in this first full weekend of August. Again, so excited. I feel like I’ve been teasing you guys with the idea of a peach recipe for weeks. To be honest, I’ve been waiting for the perfect peaches to show up, it’s just that they arrived a little late. But it’s OK because the perfect peaches are here. And today we have cake to talk about, so let’s just get right to the sweet stuff. 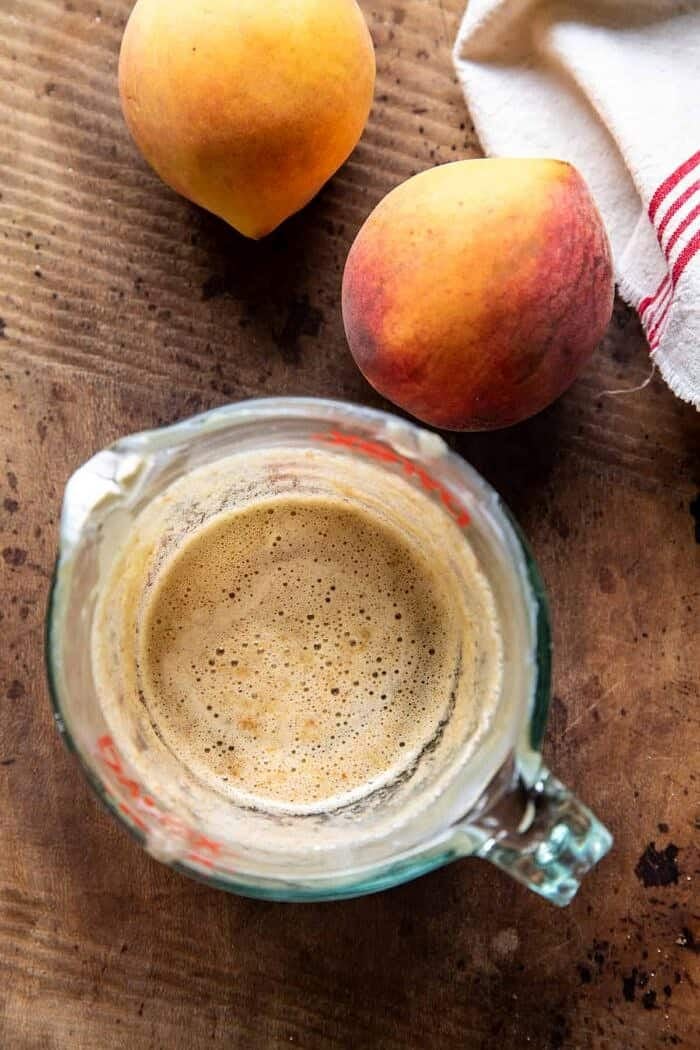 The inspiration, the process, the craziness…

Alight, so I’m going to give you all a little sneak peek into my mind. Head up, it’s complete craziness.

This recipe started out completely different. It was never an idea for a cake. Somehow though, over the course of a couple of weeks, my peach dessert idea became a peach cake. But only after trying my hand at a few different ideas. Once I had the idea for the cake, I stuck with it.

Originally the cake idea was a three-layer cake with buttercream and the works. I made that four times in a matter of two days. Was it a delicious cake and could I have made it work? Yes, but it needed more time and so much reworking. It was good, but not great. I prefer to share only the best with you all. So after two days and way too many cake layers, I caved, and just gave in.

Well sort of. There was an element from the three-layer cake that I was loving and wanted to incorporate into a simpler recipe…the cinnamon sugar peaches. 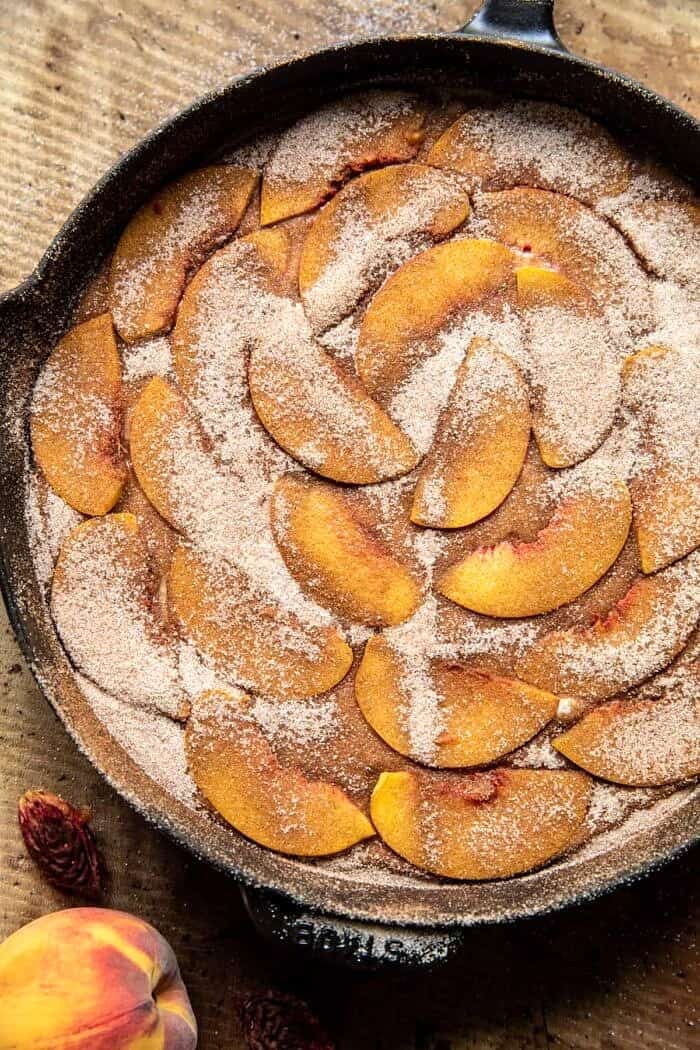 And then this cake was created…

Well, once again, kind of. The first version of this cake wasn’t made in a skillet, it was just a normal upside down cake. But then I got to thinking about how delicious some browned butter could be in the cake. That made me think about turning this into a skillet cake. Which is finally how we got to this Skillet Cinnamon Sugar Peach Upside Down Cake.

It took a whole lot of head-scratching, and really, just some good old problem solving, to get to this final peach cake. But it was all worth it.

So good – cream or no cream, just so so GOOD. 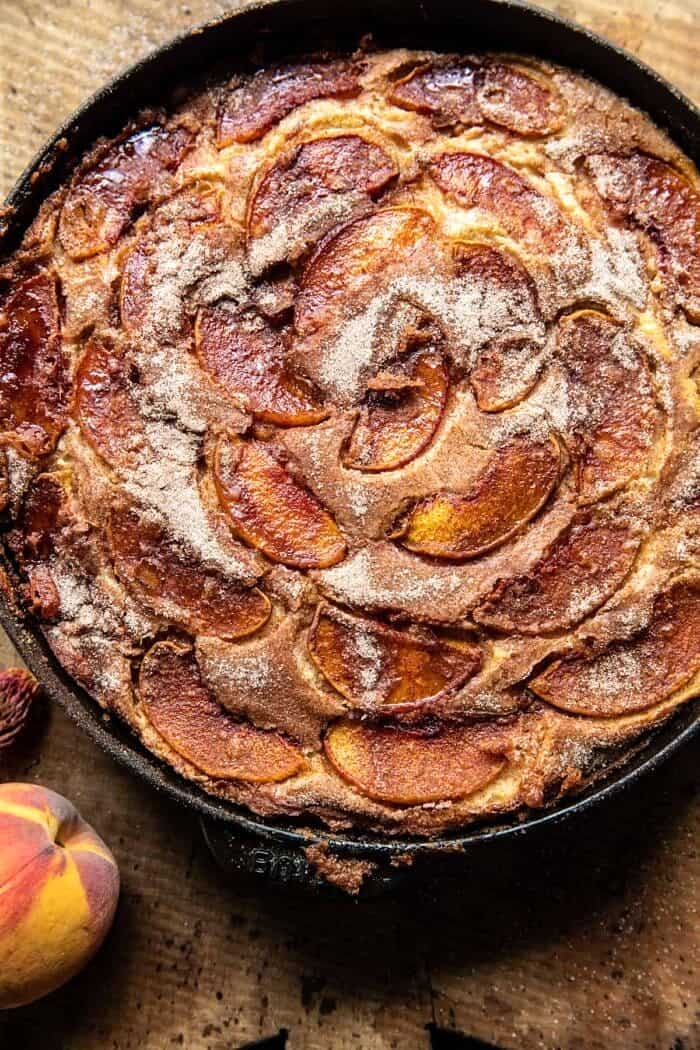 I waited and waited for good peaches to arrive here. But I finally caved in. I asked the ever so sweet team from The Peach Truck in Nashville if they would ship me a box. They so kindly sent me two boxes…which I clearly needed for all my rounds of testing.

And guys, I’d never had a real southern peach before…oh my gosh, these peaches are special. Each peach was perfectly sweet, yet crisp and so flavorful. So happy I waited for just the right peaches, they really made this cake. 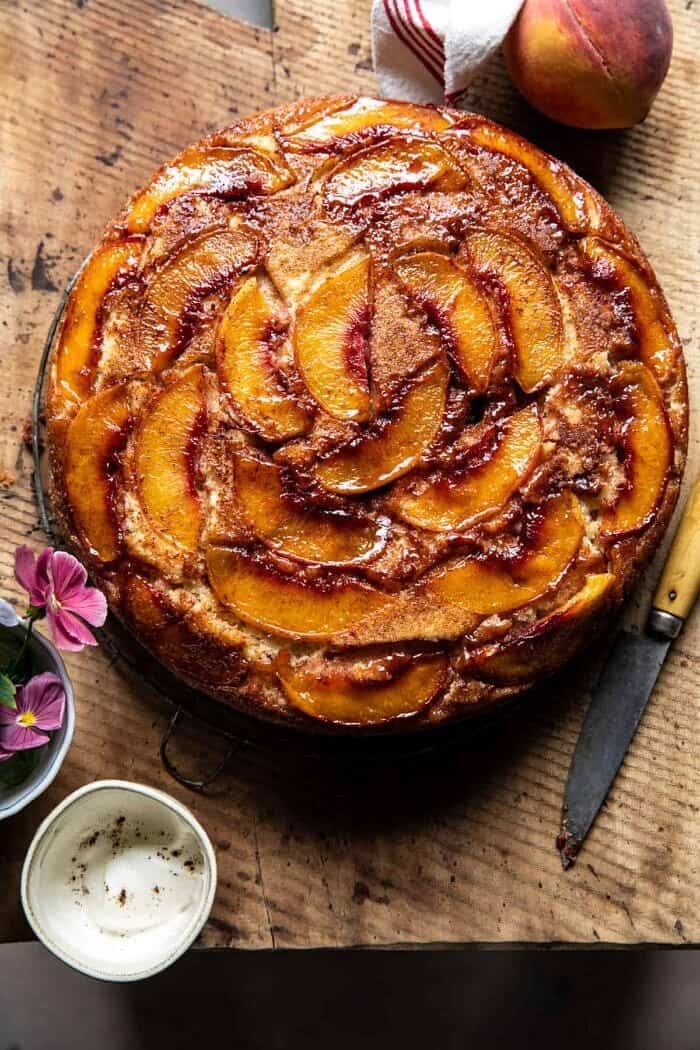 The process is pretty effortless. Start out by browning salted butter on the stove. Browning the butter really adds a rich nutty flavor to this cake and makes it just a touch cozier. Remove the skillet from the stove and pour the butter into a mixing bowl, but be sure to leave a little butter in the skillet to thoroughly keep the skillet greased. You need the skillet to be coated in butter to ensure that the peaches you’ll be layering on the bottom of the skillet do not stick.

If you are concerned about your peaches sticking to the skillet, I recommend also lining the skillet with parchment paper, then buttering the paper too.

Now, add your basic cake ingredients to the browned butter in the mixing bowl. Just a touch of yogurt (or sour cream), eggs, sugar, vanilla, and milk. Once you add the eggs, simply stir in the flour, cinnamon, and baking powder. That’s the batter. 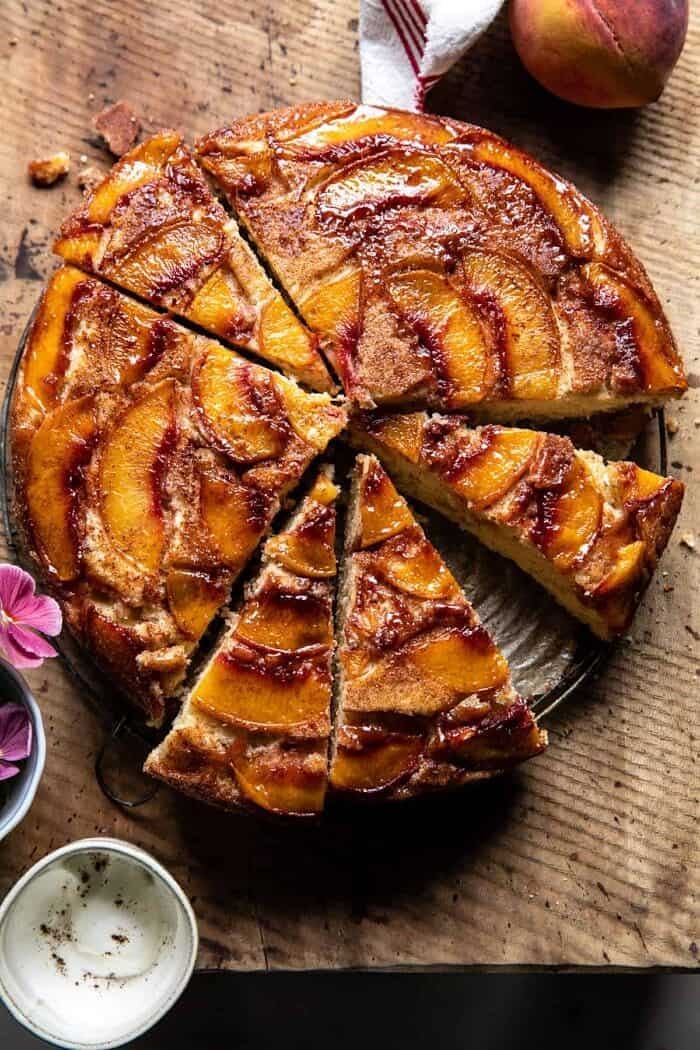 Onto the layering. This step is very important.

First, mix together some cinnamon sugar.

As the cake bakes, your kitchen will be filled with smells of summer peaches, butter and warming cinnamon.

It. Is. Truly. Wonderful!

Once the cake is done, let it sit five minutes in the skillet, then run a knife around the skillet edges, making sure to release anything that’s stuck. Then, invert the cake onto a severing plate. I know this sounds scary, but I actually had no problems with the step. That said, if any of your peaches stick to the skillet, you can just peel them off and place them back on the cake. 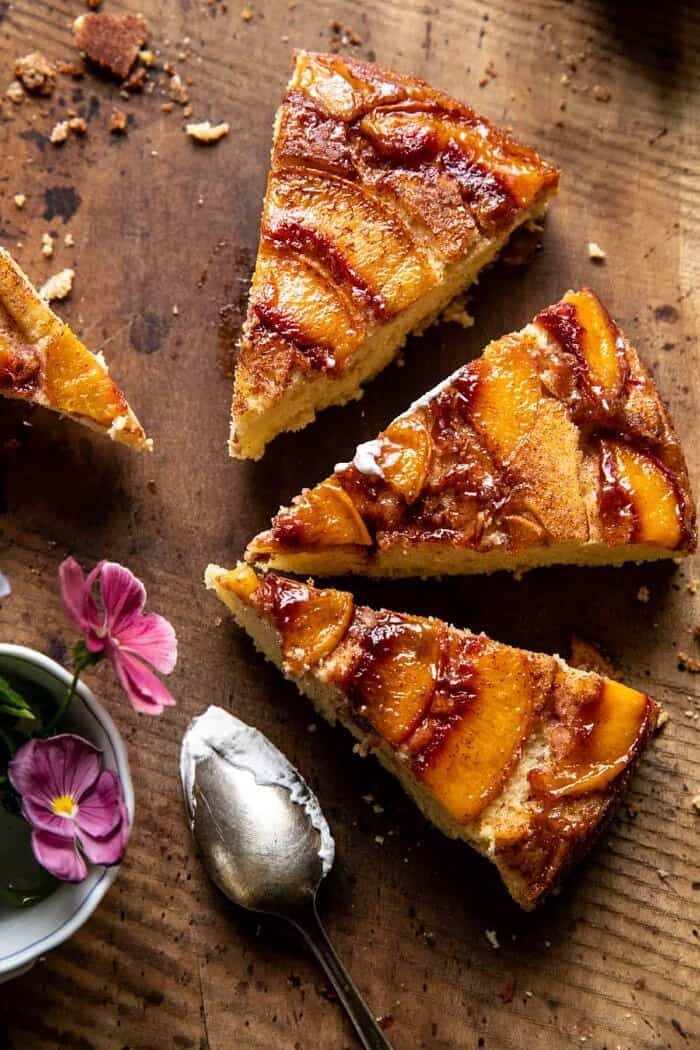 Is this needed? No, not really, and yes, you could easily just serve this cake with ice cream. But the bourbon adds another “cozy” layer that feels very southern and very fitting for this cake.

I found it to be the perfect light dollop to serve atop this warm cake. 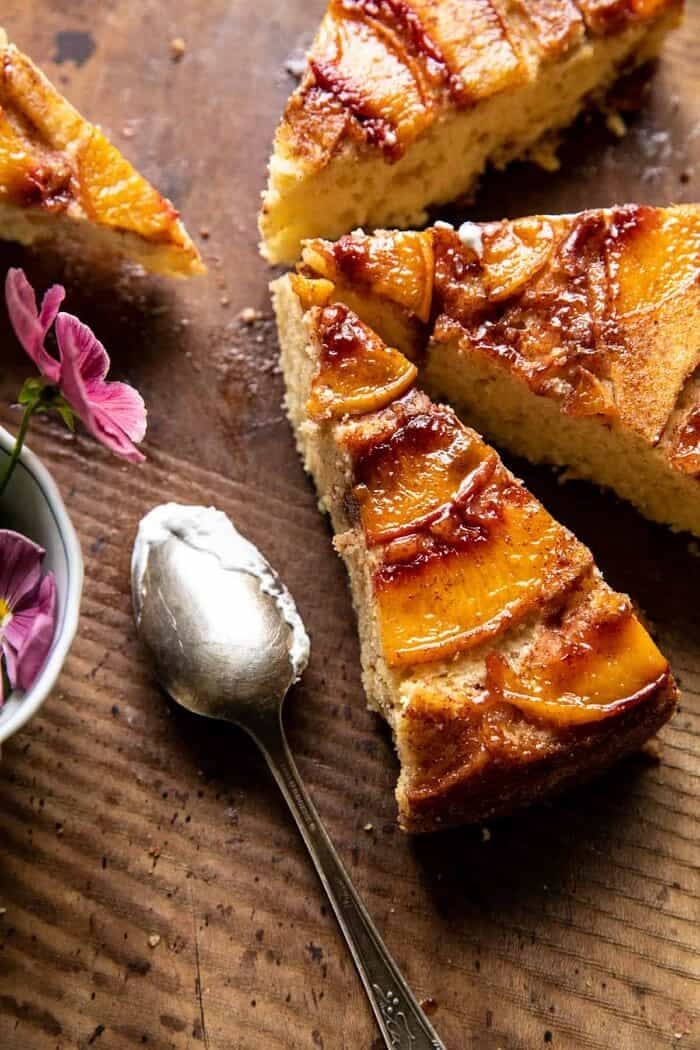 And my favorite way to serve this skillet cake? Family style, with a couple of dollops of cream right on top. There’s truly nothing more delicious than eating this right out of the skillet.

Roll. Your. Eyes. Back. Delicious!

One final note, as we slowly move into fall at the end of the month, don’t be afraid to swap the peaches for crisp autumn apples. I’m already excited to bake this once September hits! 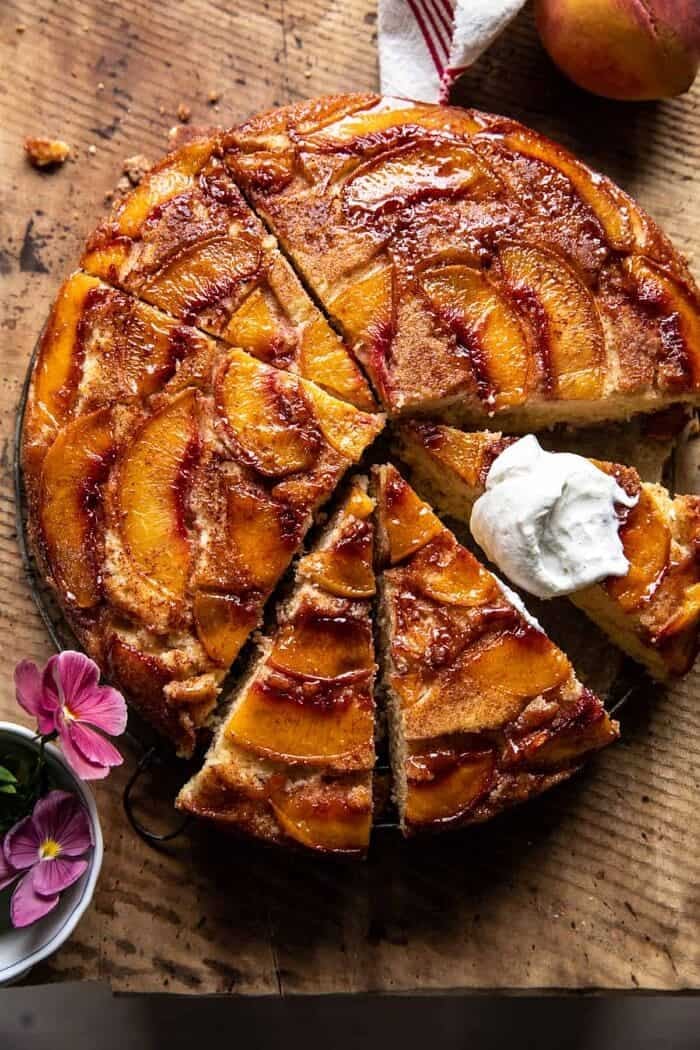 Looking for other sweet peach recipes? Here are a few ideas:

Lastly, if you make this Skillet Cinnamon Sugar Peach Upside Down Cake be sure to leave a comment and/or give this recipe a rating! Above all, I love to hear from you guys and always do my best to respond to each and every comment. And of course, if you do make this recipe, don’t forget to tag me on Instagram! Looking through the photos of recipes you all have made is my favorite!

Leftovers: can be stored, covered, in the skillet or in an airtight container for up to 4 days. If you Don't Have a Skillet: Use a 9 inch pie plate or spring form pan lined with parchment paper. You will need to bake closer to 55-60 minutes.
View Recipe Comments 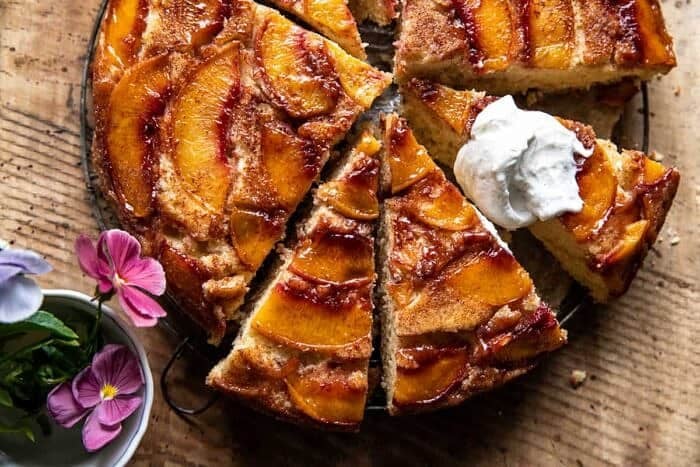 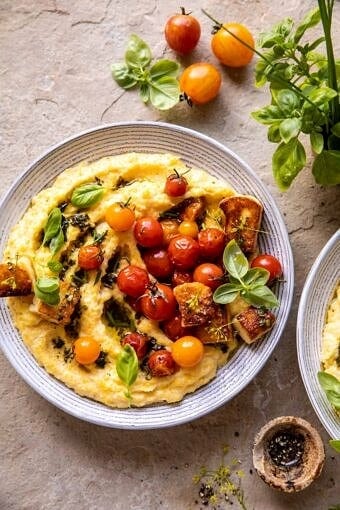