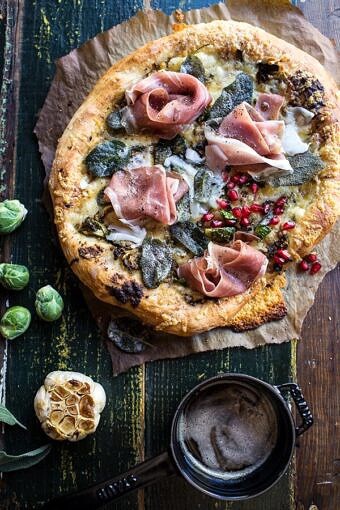 I am breaking out the dork in me!! 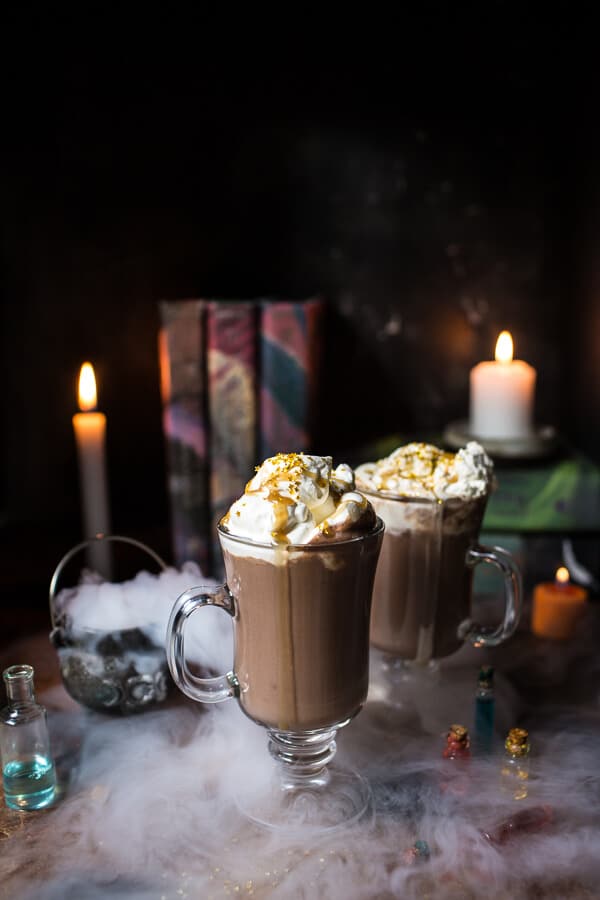 And I’m bringing more pumpkin to the table (told you I wasn’t joking about all the pumpkin!). YES.

Last October I made Death By Butterbeer Cupcakes (with treacle butter frosting and chocolate covered pretzels!!). This year, I took butterbeer and made it even better by adding chocolate to it. Everything’s better with chocolate (as if you didn’t already know that), especially when that chocolate is milk chocolate.

Actually, I’m usually an all dark chocolate girl, but this butterbeer calls for milk chocolate. Be a kid again and break out the creamy, caramely, brown chocolate that we all love. <–DO IT. This pumpkin butterbeer hot chocolate is worth it, and it’s Friday…anything goes!! 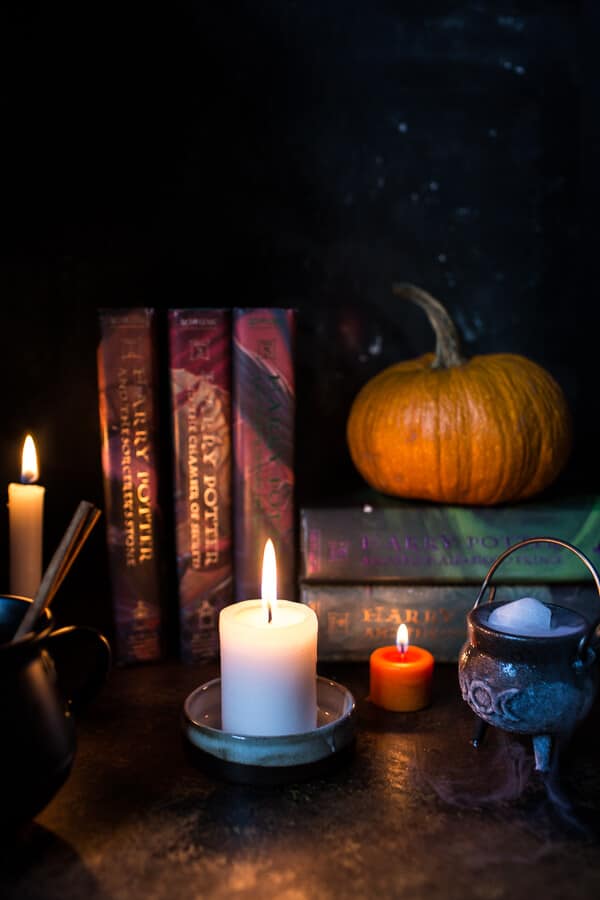 Such fun things today! First, this recipe for pumpkin butterbeer HOT CHOCOLATE, and second another video!!

Many of you have expressed that you are loving the videos, so I’m trying my best to keep them coming!! That said, todays video is going to show you A LOT of what it’s ACTUALLY like in my kitchen…craziness!

Basically here’s what happened. Kai and I shot this video toward the end of the day and I think we were both a little slap happy, and totally ready to be DONE. Plus, we made this video on a Friday, AND, it was the day before Kai was packing up to leave for school in LA 🙁 So yeah, we were maybe not on our A game…as you can see by my hair.

But then again, on any normal day my hair probably looks worse, so whatever, I’m over it. The video is just goofy and fun. Obviously I think you can can figure out how to make butterbeer hot cocoa on your own, but since I am a huge dork, and since I love Harry Potter, I thought it might be fun to make a video. 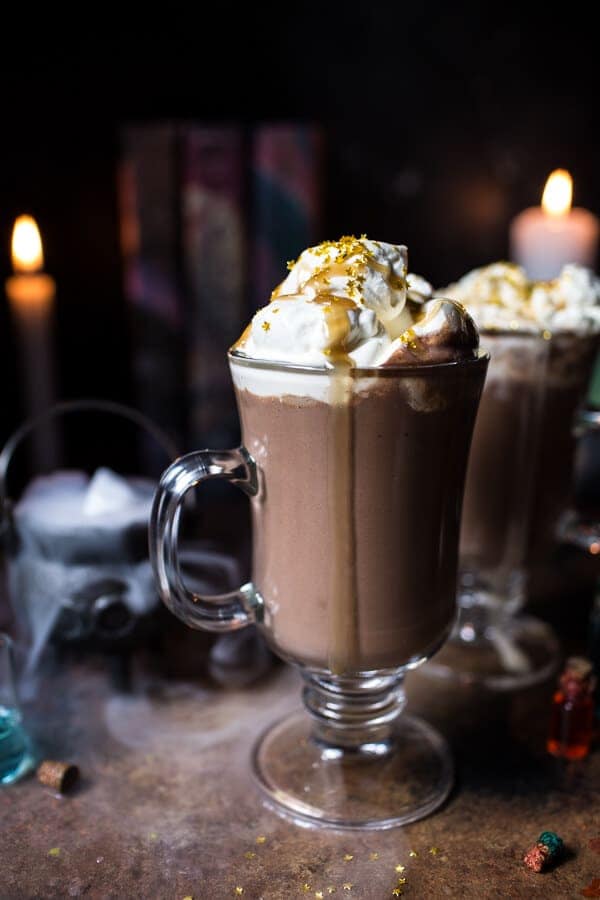 Also, let me tell you about those “broomsticks”. They didn’t make the cut for the final recipe because I just could not figure out a way to make them in a way that I was completely happy with. Yes, they are delicious, I mean they are chocolate covered pretzels with buttered phyllo dough on the ends, but the truth is, I just could not get them to turn out.

SO… If you are interested, all I did was to bake pretzel rods in a 350 degree F. oven with phyllo attached at the bottom and shaped into the best broom like shape I could make, for 10-15 minutes. Then I dipped the ends of the pretzels in chocolate and placed them in the freezer until the chocolate set.

If any of you do try these broomsticks and have success, let me know your secret!! 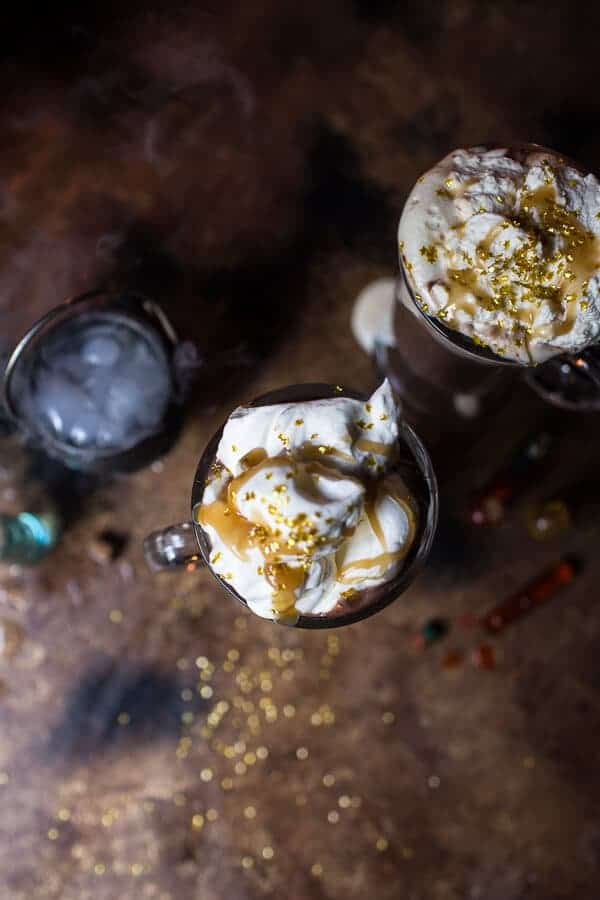 OKAY, and when you get to the part in the video where Asher WILL NOT try the butterbeer, just know this, the only reason she would not take a sip was because she had taken one five minutes earlier and burned her tongue. This meant she would not try it again until the butterbeer was basically cold, well after we were done shooting the video!

Also know that literally the second the camera stopped filming she took a sip and had the most perfect camera ready reaction…but ahh, the camera was not filming 🙁

And finally, the milk chocolate. Oh the milk chocolate! Originally, I had planned on using dark chocolate, but I completely messed up the first round of ingredients for the video, so we had to re-shoot. The issue was that I was out of dark chocolate. Hmm. Kai brought to my attention that I had a bag of Hershey’s kisses just sitting there. He also said he’d be happy to peel the wrappers…wonder why??

You know you want to, and like I said, it’s Friday – anything goes!

Oh, and FYI, dry ice is maybe the most fun thing ever. Just sayin. 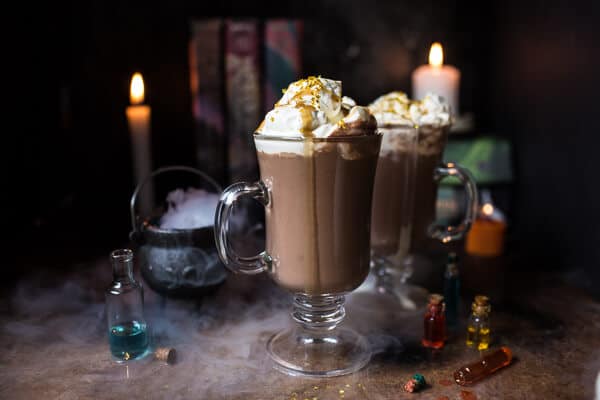