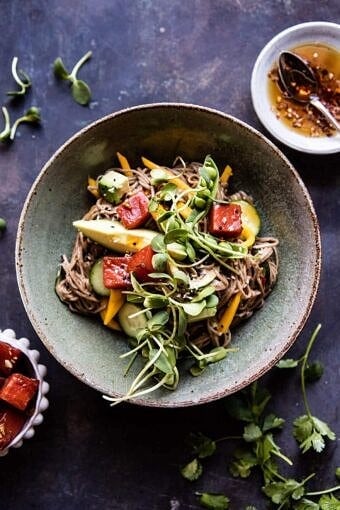 Yup, we are going there. The most serious (Irish..ish/Mexi fusion) burrito. 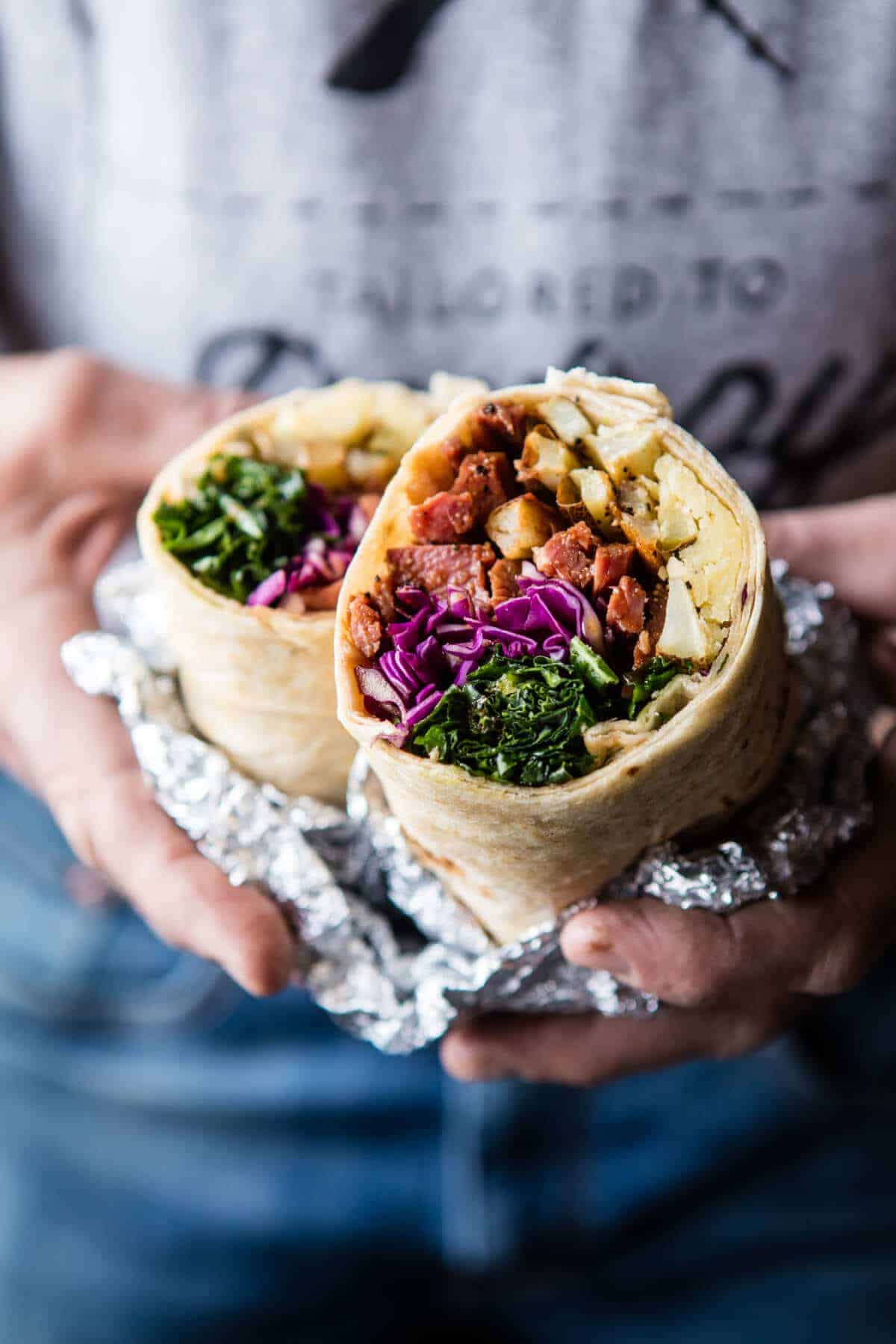 I’m going to be honest, I was not sure about this burrito. I mean, an Irish/Mexi fusion style burrito? Like is that just way too out there? Too much? Too over the top? Just too crazy? I really wasn’t sure…until I made them, and discovered that everyone loved them. Like LOVED them.

SIDENOTE: yes, that shirt in the background of that photo up there does say destroy. I did not even realize it as I was taking the photos…probably because I was hyper focused on how the food looked. When I finally realized what the shirt said I panicked, but then I thought a bit and you know, I think it’s perfect. Any guy that gets his hands on this burrito is going to destroy it…kind of graphic, but I’m trying to just go with it…so come on guys, let’s GO WITH IT. 🙂 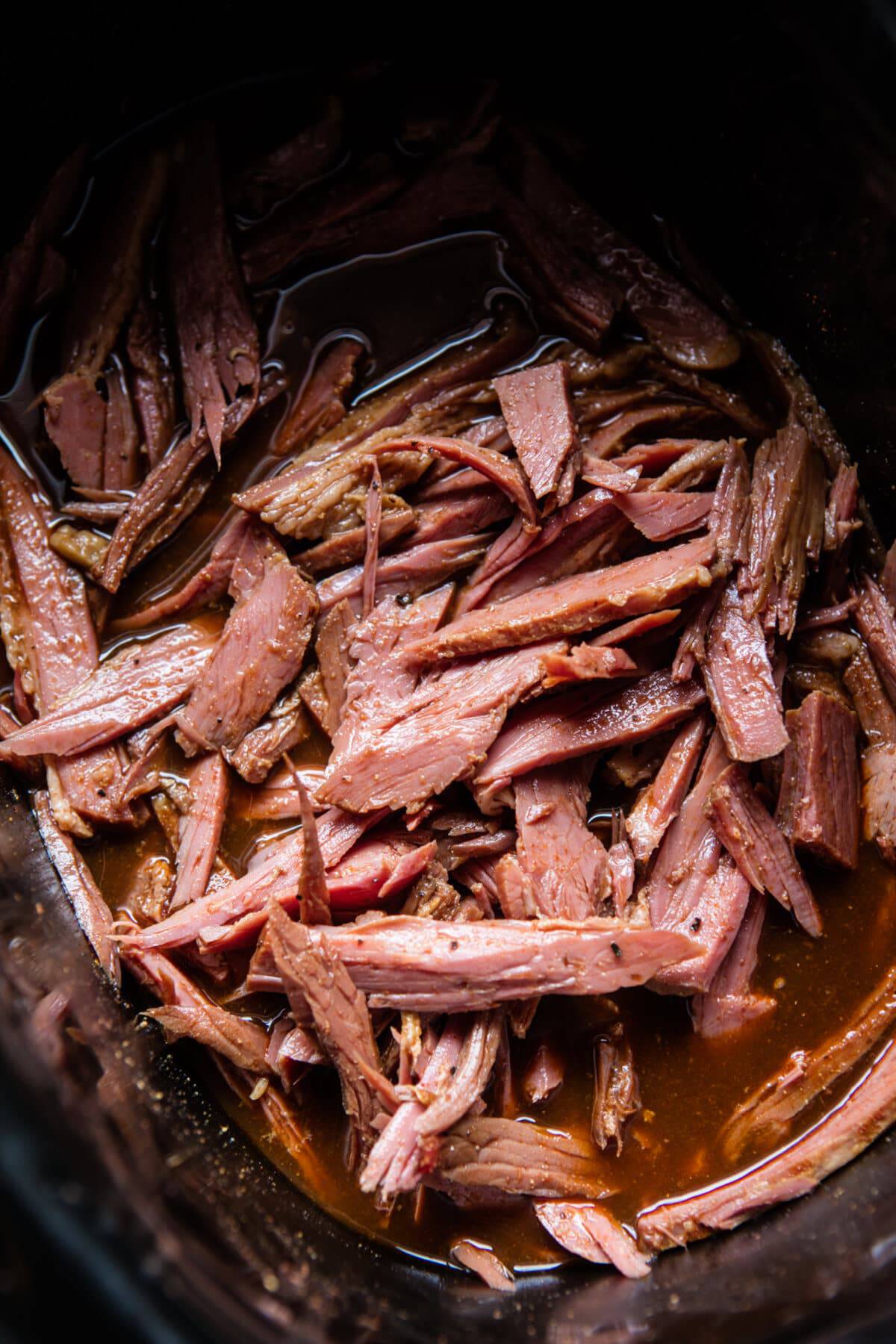 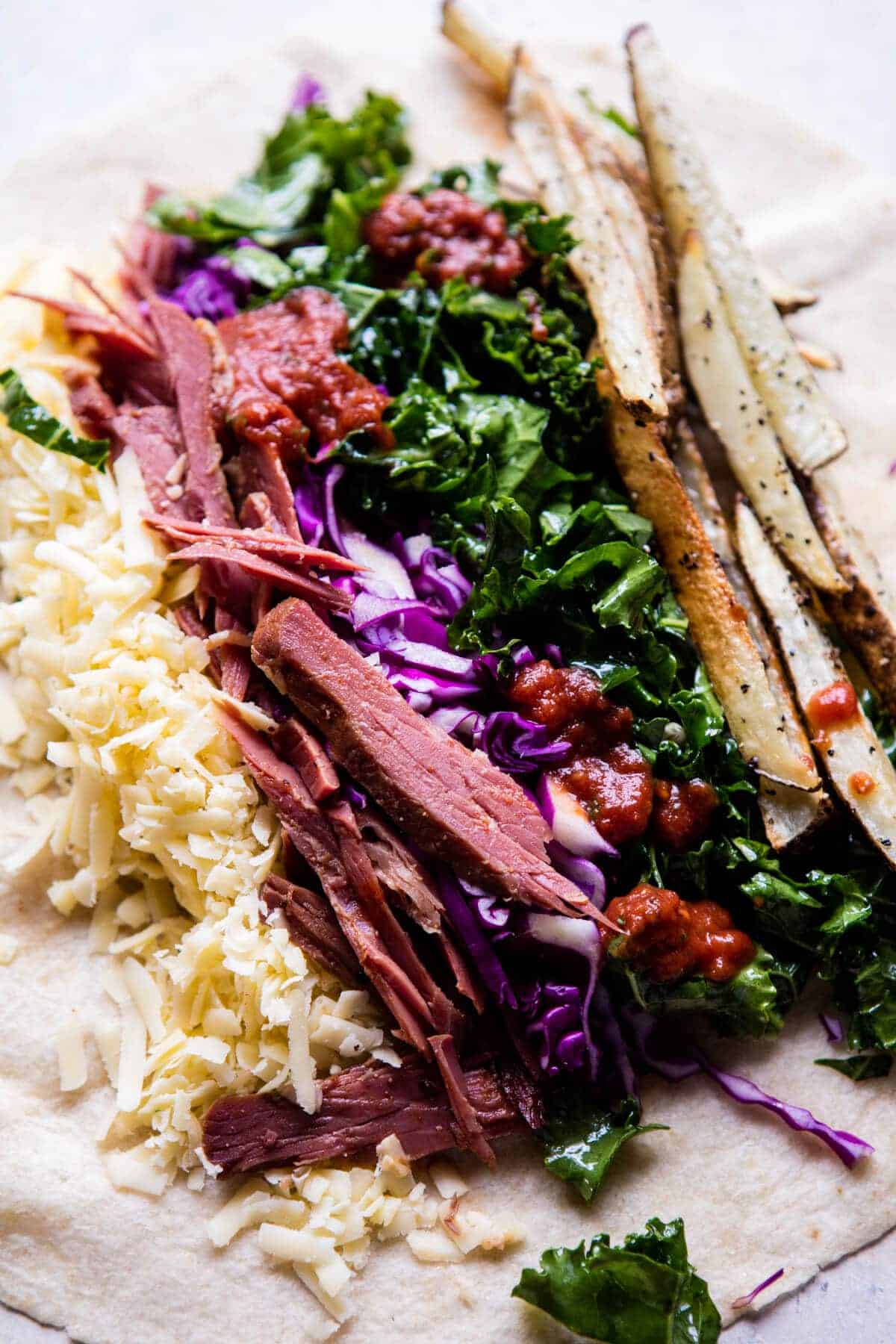 SO, let me just run through the contents of this burrito real fast. You ready? It’s kind of a lot, but I mean, when talking about an “Irishman’s” burrito I just felt like it needed to be serious…

…first up, you need wraps! I could not find any big enough in my grocery store, so I called in the troops, aka…the younger brother and his friends, to run down to Chipotle for some of their extra large tortillas. Of course, I had to buy them burritos for their efforts, but at least they got the wraps. And yes, Chipotle will sell you just their tortillas.

…second and most importantly, slow cooked brisket. Cooked in Guinness and seasoned with all my favorite Mexican spices. Not going to lie, this is probably my favorite way to cook up a brisket. So good.

…third, you need some kind of potato. I roasted up some hand cut fries. Note: this is not a rice burrito, this burrito NEEDS potato. No questions.

…fourth, CHEESE. Irish cheddar is where it’s at. Trust me.

…fifth, shredded cabbage and kale. Greens are a must, especially the cabbage. I mean, cabbage is an Irish classic.

…sixth, you need cilantro. No burrito is complete without it.

…seventh, salsa. Homemade, spicy, smoky chipotle salsa. It’s the completion to this loaded burrito and is also a must. 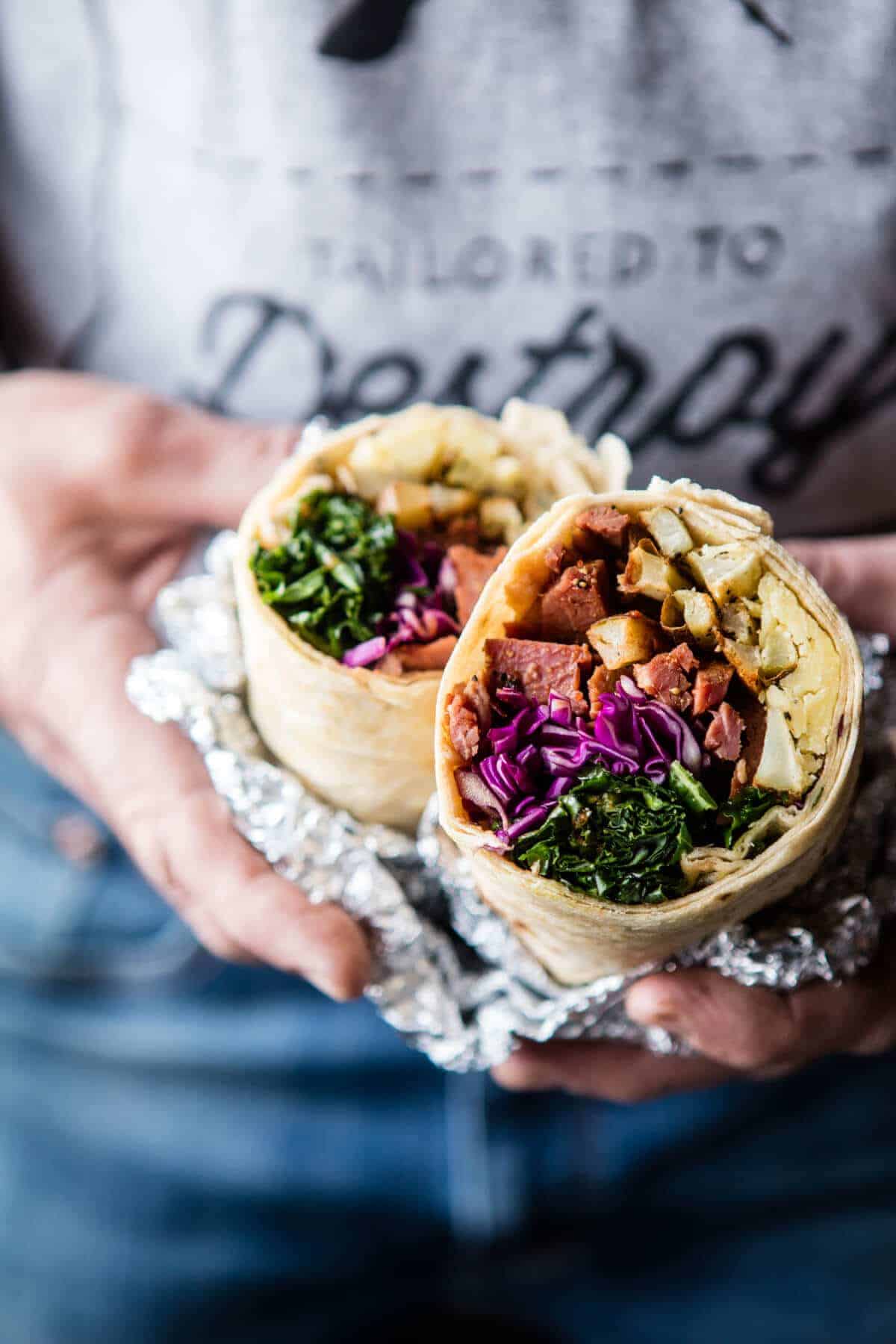 I know, I know. It’s kind of a lot to pack into a burrito, but honestly I’m in love with this recipe, which is why, after much debating in my crazy, insane person head, I decided to share it. It would have been just cruel of me to let my overthinking self deprive you guys of this recipe. It’s pretty much just the best, and I couldn’t think of a better March recipe. Like I said, I know it’s a little out there, but some of the best recipes are ones that stray just slightly from the classic path. I mean, at least in my opinion, this is a pretty fun way to eat corn beef!

Promise, you’re going to love them.

Oh, and I just want to note that with this burrito, I now have a grand total of THREE recipes that my eldest brother will very happily eat: Gumbo, Korean BBQ SteakBowls and these Irish..ish Burritos…cool. cool.

Serious Question: when your burrito is bigger then your mouth, how do you dive in for that first bite… 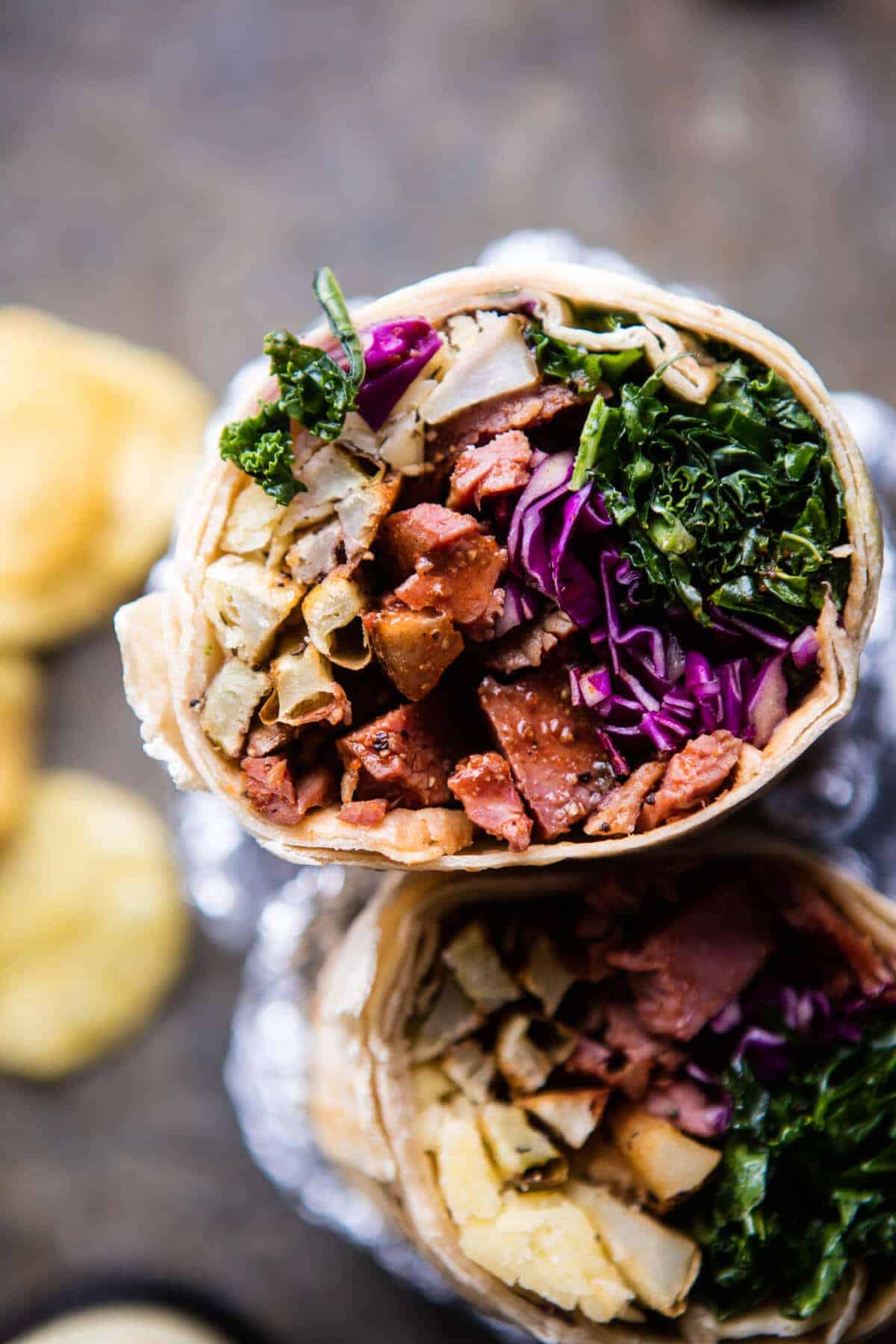 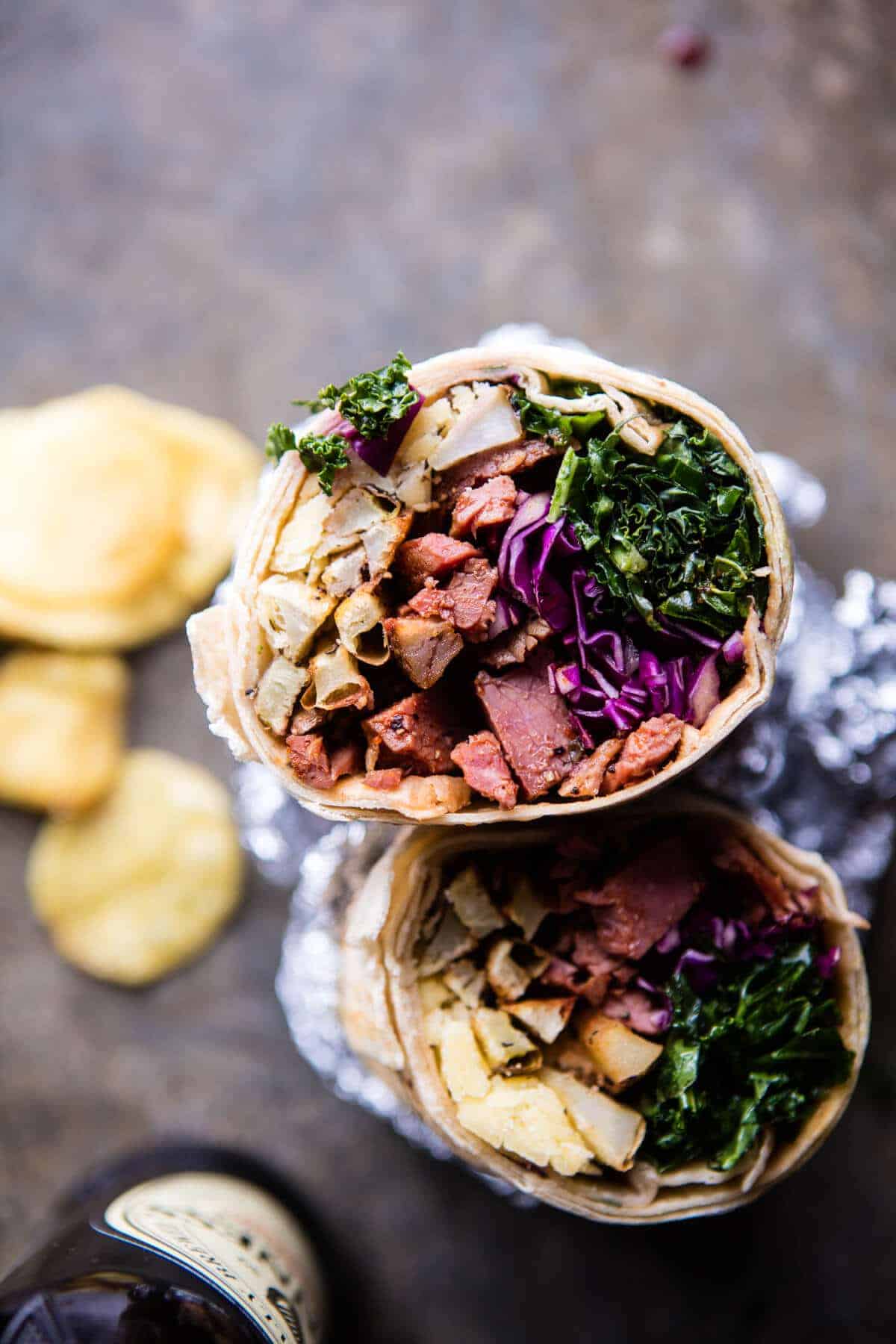 Ahhh, just go for it and destroy it…get it? Destroy it? The Shirt? No? Ok. bye. 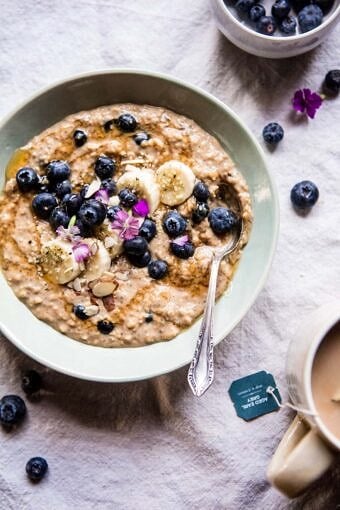