Better than store-bought Homemade Cinnamon Toast Crunch. Yes, you can make cinnamon toast crunch at home. It’s way easier than you think, and yes, it will be better than the boxed stuff, so much better. This cereal is extra crunchy, has a touch of butter, is flaky, perfectly sweet, and heavy on the cinnamon. Every bite is roll your eyes back good. It’s best enjoyed any time of day…with milk, as an ice cream topping, or simply by the handfuls. 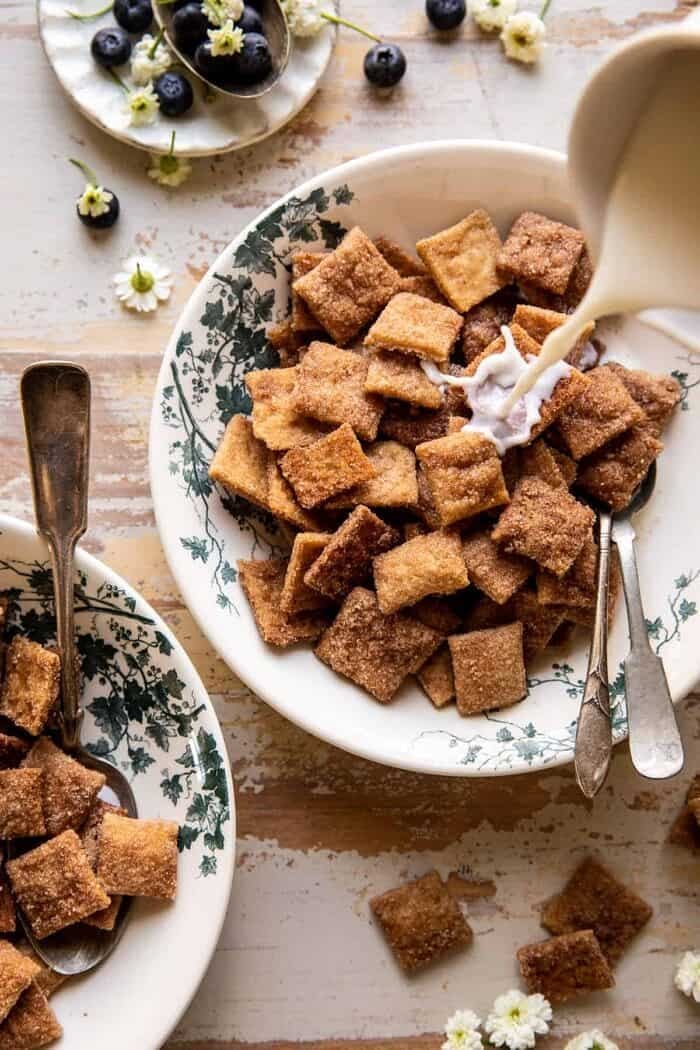 Well, this is an exciting Tuesday. We’re making homemade cinnamon toast crunch and it’s truly one of my best recipes yet.

You guys? This cereal is so good. It brings back all the best childhood memories. And honestly, it’s not only a million times better than the boxed stuff, but it’s also simple to make. If you can roll out pie dough, you can bake up your own homemade cinnamon toast crunch cereal. Plus…it’s going to be so fun! 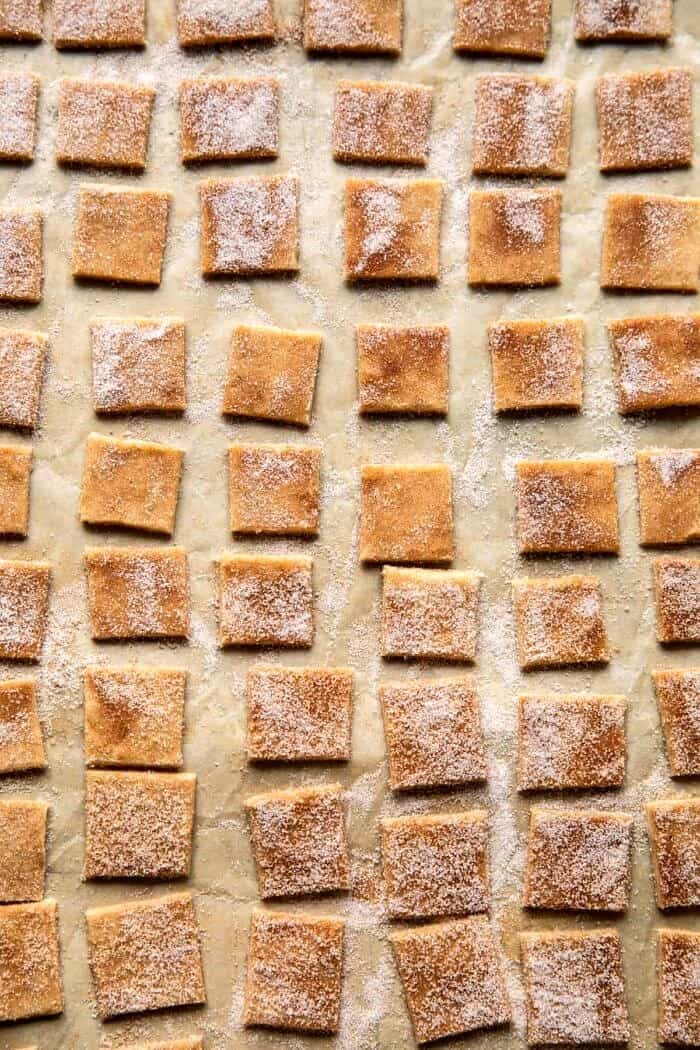 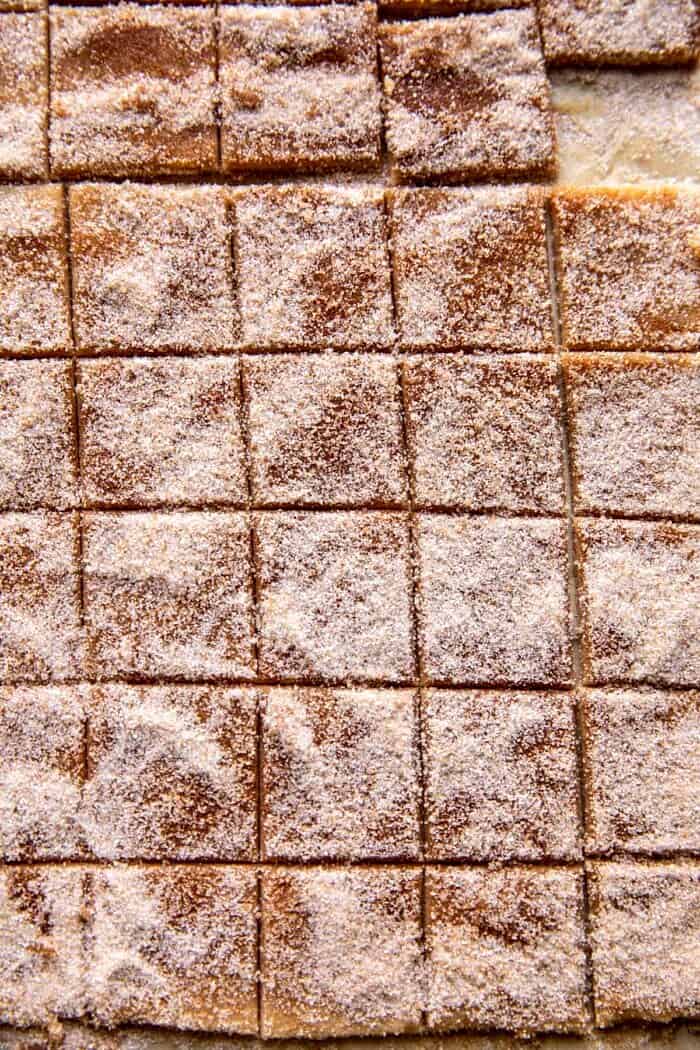 There was a lot of inspiration from different places for this recipe, so let me walk you through it all.

First and foremost, as a kid cinnamon toast crunch was my favorite cereal (then Cheerios, but I was never that into any other cereals). I’m really not sure how one could not love cinni toast crunch…it’s one of the best cereals out there. If the boxed stuff wasn’t so bad for me, I’d probably still eat it regularly. I’ll forever love anything cinnamon toast.

Two, after making homemade Twix bars, homemade Chocolate Fudge Pop Tarts, and then, homemade Frosted Brown Sugar Cinnamon Pop Tarts, I was left wanting to create more homemade versions of my childhood favorites. Something about quarantine life has left me wanting all the nostalgic foods from my past. Is that weird? I don’t know, but I sure am having a lot of fun creating (and improving) on the boxed foods we all ate (and loved) growing up.

Next, most everyone is home right now. Many of you are home with your kids and they are bored. I don’t personally have kids, but I have my little sister, Asher, visiting me often…and she is bored. Asher’s favorite cereal? Cinnamon Toast Crunch…though she’s never had the boxed kind. My parents just don’t buy that stuff anymore (correction – Asher says she has had it at her cousins in Cleveland). But I’ve made this homemade version before and Asher has always loved it. When I told her what I was making on Sunday, her eyes widened with excitement and we had a lot of fun baking this together. So, my point? This is a great recipe to bake up if you have bored kids at home.

And finally, with summer so close, I feel like a bowl of homemade Cinnamon Toast Crunch would be the perfect lazy summer morning breakfast. No cooking, just add cold milk…a chill laid back morning with a bowl of sweet, crunchy breakfast cereal. 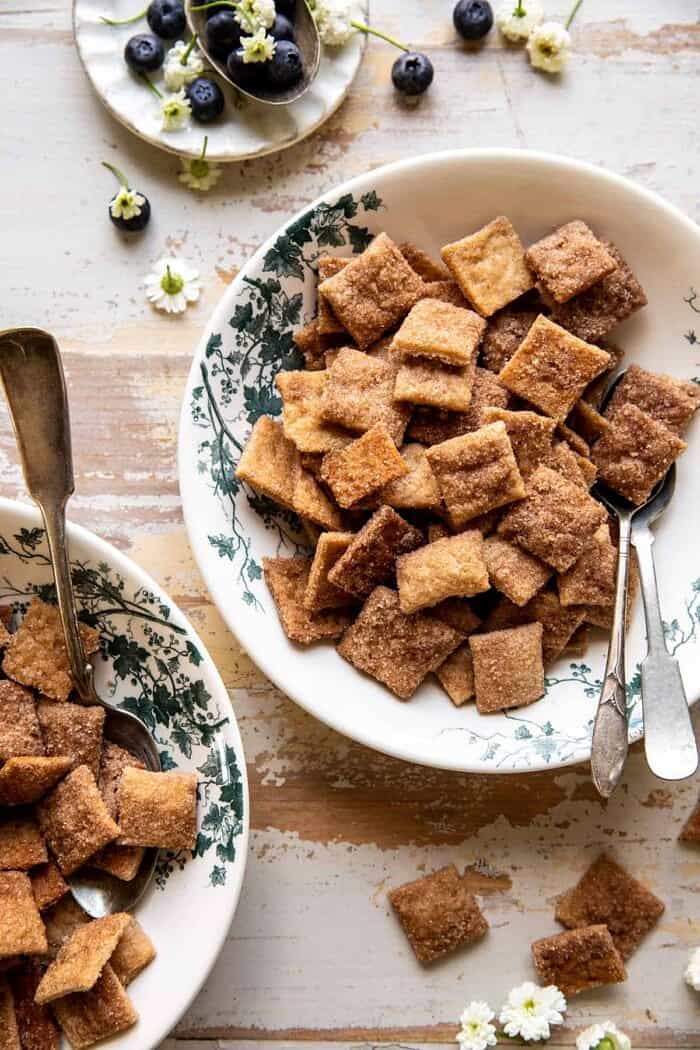 PS. dying to know what everyone’s favorite cereal was/is? Are you all about Cinnamon Toast Crunch? What’s your favorite? Please…do share. 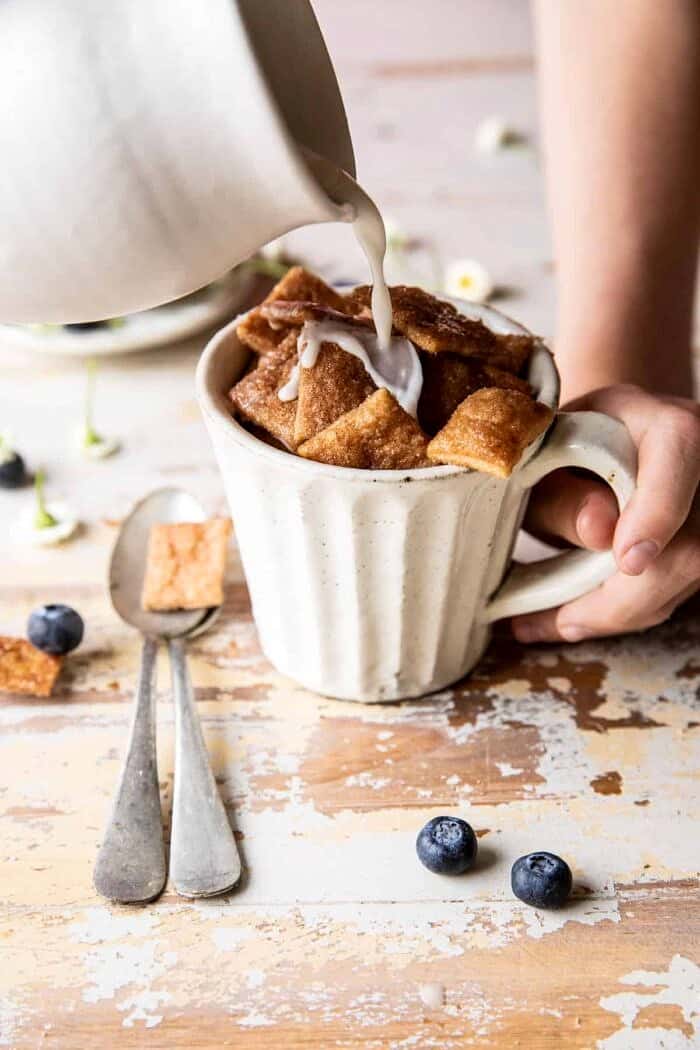 Here are the steps…

This cinnamon toast crunch cereal is simple. As I mentioned, if you can roll out pie dough, you can make cinnamon toast crunch. It’s a very simple mix of whole wheat flour, all-purpose flour, cinnamon, butter, vanilla, and a touch of sugar too. Just seven ingredients. All of which you can find in your pantry and fridge.

At least that’s my hope.

The cinnamon adds flavor directly to the dough. The butter creates a flaky bite, the vanilla adds flavor, and the sugar sweetens it all up. Start by mixing together the cinnamon and sugar. See, super simple. 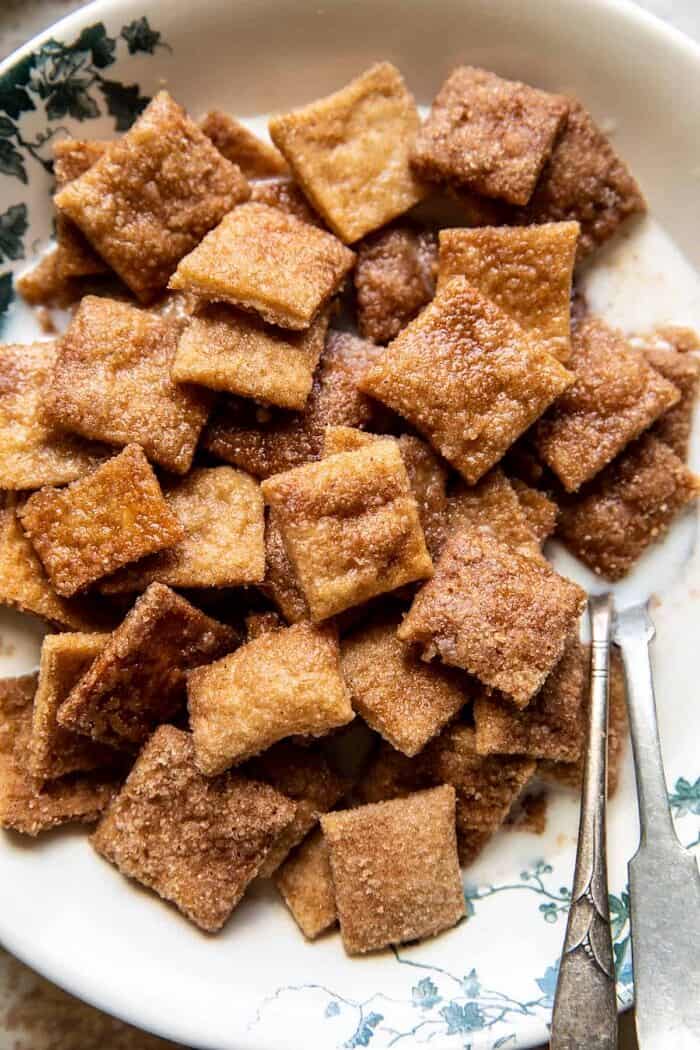 Now, mix up the dough. I like using the food processor to easily mix the dough and create the flakiest, crunchiest cereal, but you can simply use your hands as well. Once the dough is mixed, it’s time to roll it out.

The key is to roll the dough pretty thin, I’m talking about the thickness of a quarter. This will give you the crunchiest cereal.

Once the dough is rolled out, I then transfer it to a sheet of parchment paper, brush with butter, and sprinkle with that cinnamon sugar. At this point, cut the dough into little tiny squares. 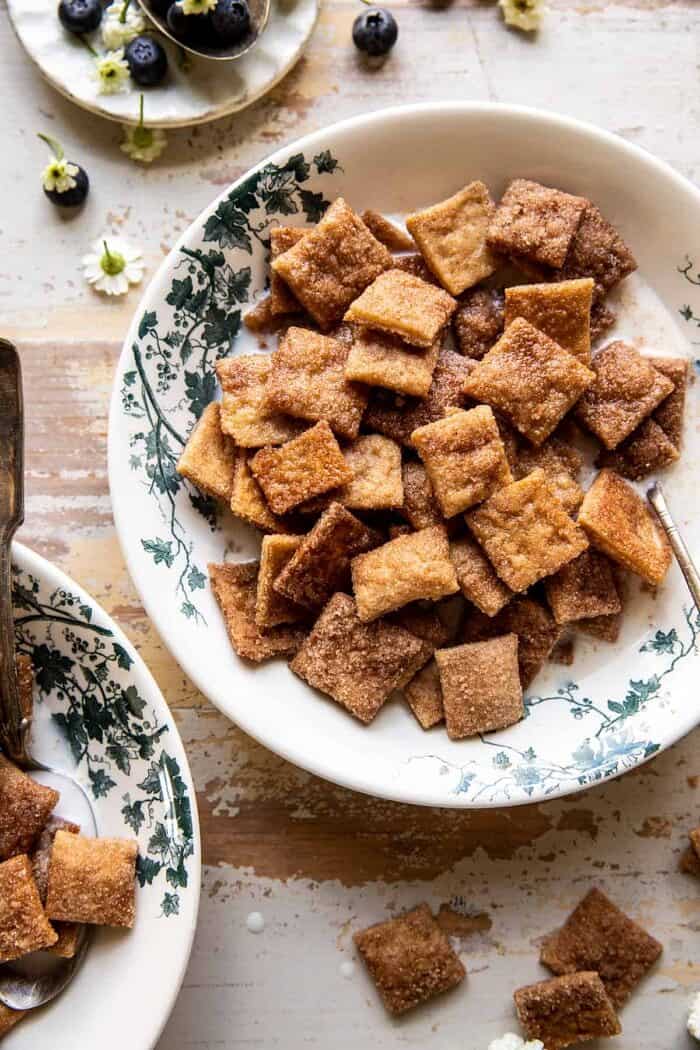 Next, transfer the parchment paper to a baking sheet and separate the squares, spacing them apart. After a lot of testing, I find the method of cutting the dough first and then transferring to a baking sheet to be the easiest, and to work the best.

Finally, you bake. No chilling needed, just bake for a little over ten minutes, the smells are wonderful. You can eat warm, but these are best once cool. As they cool they become crunchy and so delish.

And that’s pretty much it. Could not be simpler, and the end result is roll your eyes back good.

Well, I don’t know for sure. It’s been a while since I had my last bowl of cinnamon toast crunch, but this cereal does taste really, really good. And if my memory serves me correctly, yes these taste just like cinnamon toast crunch. But Asher says…better. You can really taste the real cinnamon with undertone flavors of vanilla and sweet butter.

And everyone’s second question…can you enjoy this cereal with milk? YES, you can. And it’s beyond GOOD. It’s also great by the handful or when served atop ice cream or even yogurt. The options are endless, but for me, it’s best with cold milk or just by the handful for snacking. What’s your pick?

And guys, that’s about it. This cereal is the simplest to make and every single ingredient is a pantry staple. Meaning you have zero excuses to not bake these up this week. Promise it will be fun, and yes, so delicious! 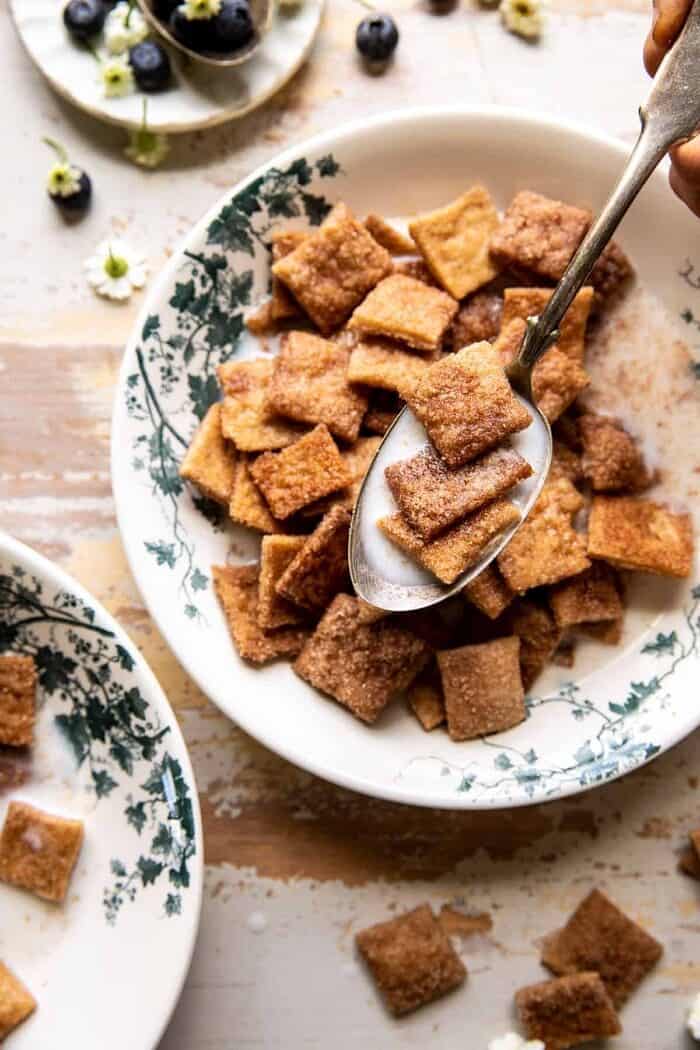 Watch The How To Video:

Looking for other homemade favorites? Here are a few…

Lastly, if you make this homemade cinnamon toast crunch cereal, be sure to leave a comment and/or give this recipe a rating! Above all, I love to hear from you guys and always do my best to respond to each and every comment. And of course, if you do make this recipe, don’t forget to tag me on Instagram! Looking through the photos of recipes you all have made is my favorite!

To Make Gluten Free: Use an equal amount of your favorite gluten free flour blend in place of the all-purpose flour and whole wheat flour. I recommend Cup4Cup gluten free flour.  If you don't have a Food Processor: You can use your fingers to mix the butter with the flour until the butter is pea sized. Slowly drizzle in the cold water as directed.
View Recipe Comments 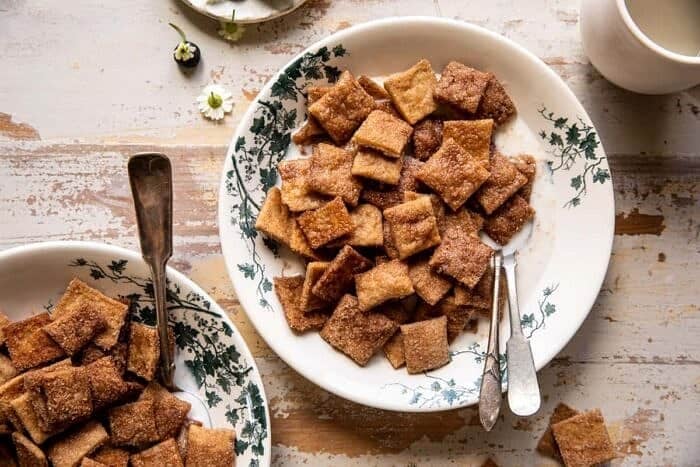