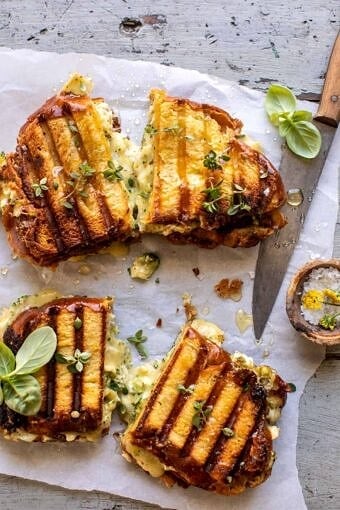 (Better than store-bought) Homemade Frosted Brown Sugar Cinnamon Pop Tarts. Easy homemade brown sugar cinnamon filling, stuffed between two layers of cinnamon dough, baked until toasted, and finished with a sweet vanilla and cinnamon frosting. These brown sugar cinnamon pop tarts are flaky, perfectly sweet, and heavy on the cinnamon. Finish each mini tart with a sprinkle of cinnamon sugar or pretzel salt for an added layer of deliciousness. Every bite is roll your eyes back good! 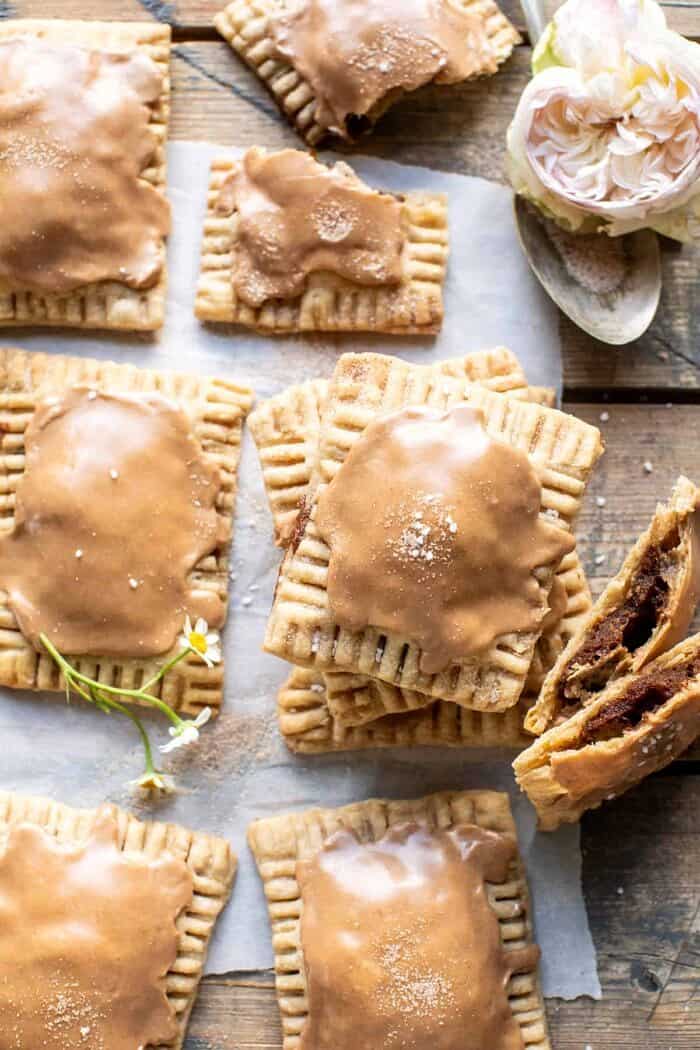 After sharing my homemade chocolate fudge pop tarts a couple of weeks ago, we received so many messages and comments. so many of them were requests for a homemade brown sugar cinnamon pop tarts. I had no idea that the cinnamon flavor is apparently everyone’s favorite. Growing up, I always ate the chocolate flavor. It just never occurred to me that you all might actually LOVE the brown sugar pop tarts more.

Well, I heard your requests loud and clear. Today we have homemade frosted brown sugar cinnamon pop tarts. And honestly? These really are SO GOOD. Yes, I will forever love the chocolate fudge pop tarts, but I have to admit, I think I missed out on these cinnamon tarts as a kid. The crust is flaky and buttery, the filling is sweet and heavy on the cinnamon…with just a hint of butter, and the frosting is that final layer that completes these little mini tarts.

Admittedly I hesitated to share this recipe so soon after the chocolate tarts. But with everyone baking up a storm right now I figured, why not? These are fun to bake if you’re home with your kids or just need a random Tuesday afternoon project. And most importantly? They’re delicious. 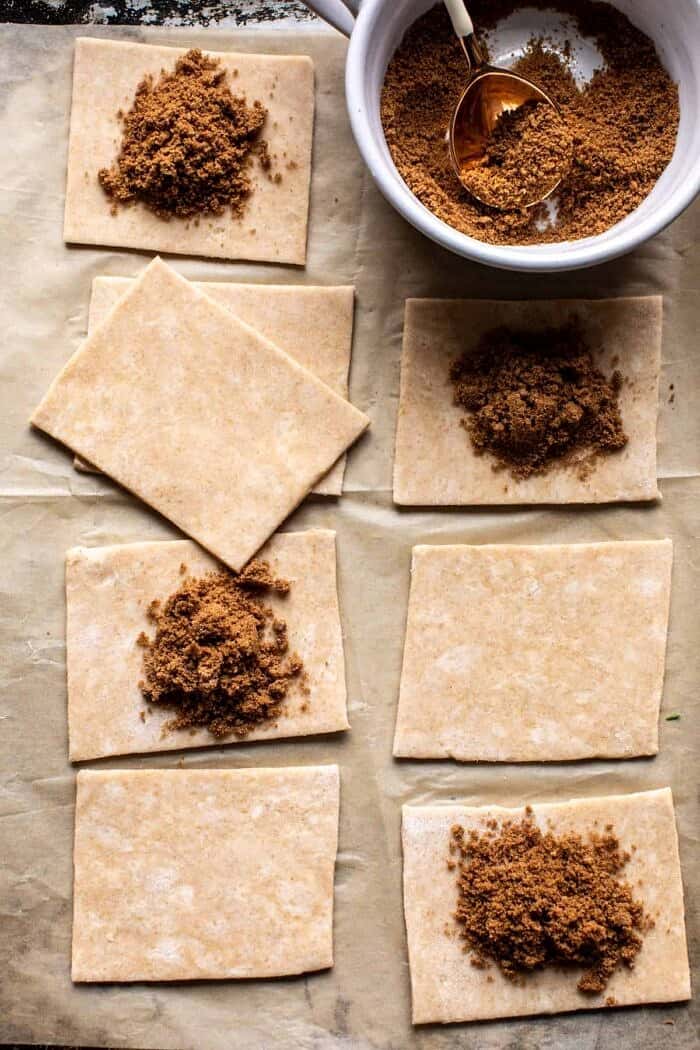 Here are the steps…

These pop tarts are simple. Even simpler than the chocolate fudge pop tarts because the filling is quicker to mix up. This filling doesn’t require any cooking or any time in the fridge to chill. It’s a very simple mix of brown sugar, flour, cinnamon, butter, and vanilla. That’s it, just mix and done.

Once the filling has been mixed, make the dough. I really wanted these pop tarts to be as authentic as possible to the ones from the box…but taste better (of course). But I also didn’t want to use just plain old dough. The boxed tarts have a crust that’s similar to a graham cracker, so I wanted to mimic that look and flavor. To do this use, I use a mix of all-purpose flour, whole wheat flour, and cinnamon. The whole wheat flour adds a little more crumb and a little more color to the dough. The cinnamon adds flavor. 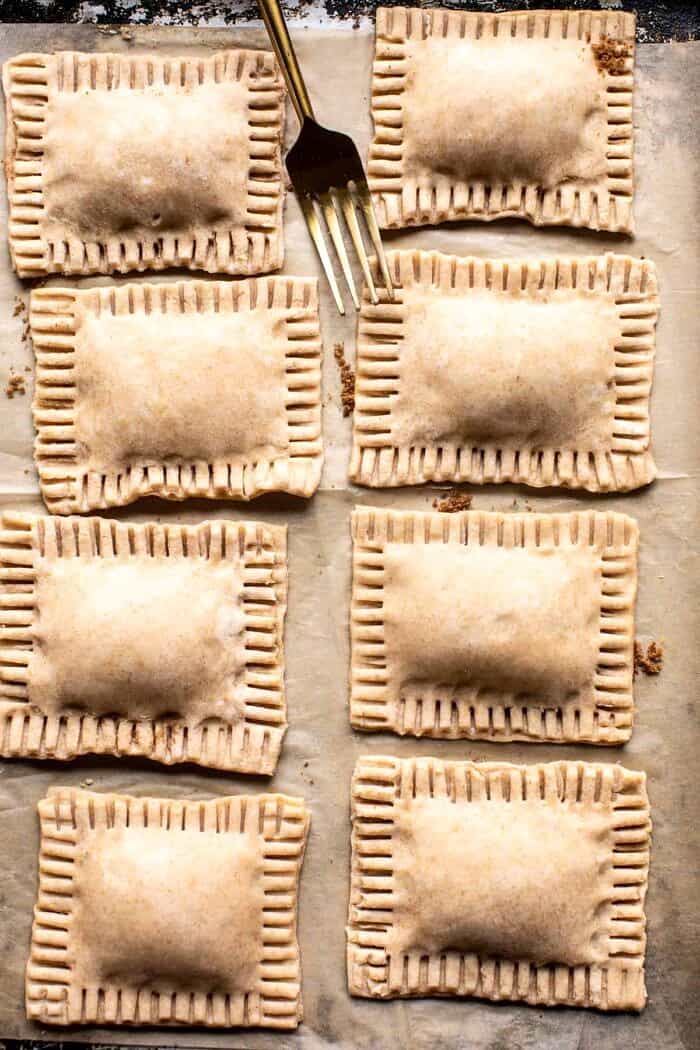 pop tarts before baking (above), pop tarts after baking (below) 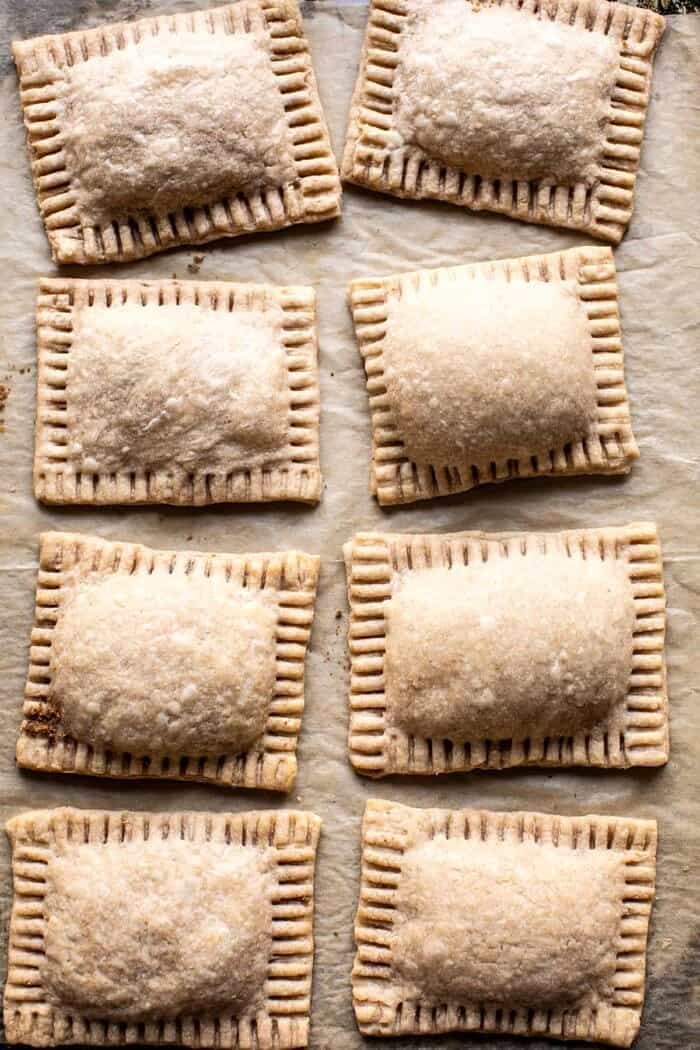 The result? It took a few trials, but I think I got them pretty darn close to the classic look…but with a better taste, thanks to using real ingredients.

I like using the food processor to easily mix the dough, but you can simply use your hands as well.

Roll the dough out and cut into rectangles. Use the back of a spoon to spread the filling over half of the rectangles, leaving a small border around the edge of the dough. At this point, you’ll want to brush the borders of the rectangles with the egg. Using the beaten egg ensures that all of the filling stays inside of the pop tarts while they bake. Add the top piece of dough to enclose the filling. Then use the tines of a fork to crimp the edges around the tarts. This seals all that yummy filling inside.

Bake the pop tarts up, and twenty minutes later you’ll have the smell of warm cinnamon wafting in the air. You’ll also have the most delicious homemade frosted brown sugar cinnamon pop tarts! 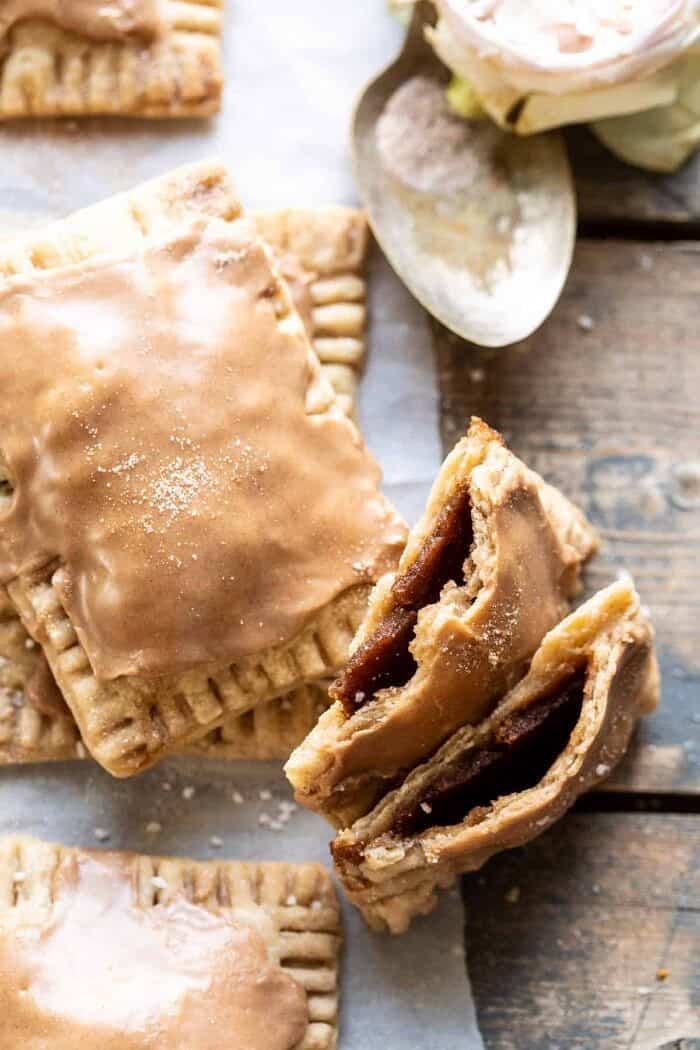 While the pop tarts cool…

Make the frosting, which is key. It’s a pretty quick mix up of powdered sugar, vanilla, and cinnamon. Nothing fancy, but it’s a mix of very delicious (sweet) things.

Spread the frosting over each tart. Then let the pop tarts hang out for a bit to give the frosting some time to harden. And that’s pretty much it. Could not be simpler, and the end result is roll your eyes back good. 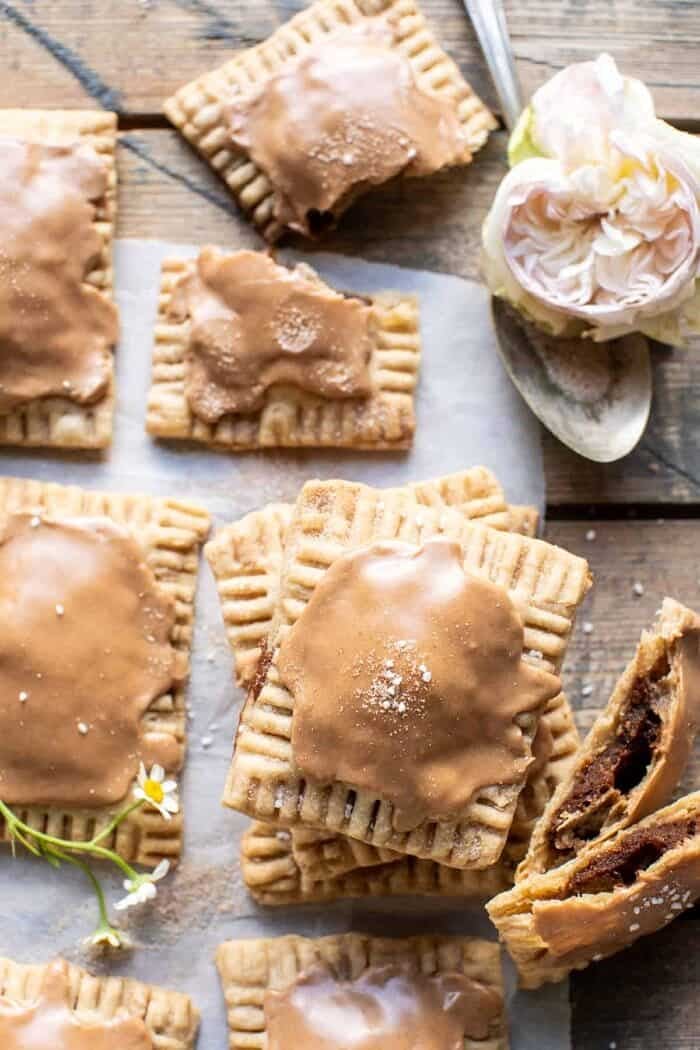 The real question? Do they taste like the original Pop Tarts?

Well, I don’t know for sure. It’s been a while since I had my last pop tart, but they do taste really, really good. You can really taste the real brown sugar and cinnamon with undertone flavors of vanilla and sweet butter. The crust is flaky and the center filling is soft and gooey.

And everyone’s second question…can you put these in the toaster? I wish I could say yes, but no, I would not recommend it. If you leave the frosting off of the pop tarts, then yes, you can easily toast these in the toaster and enjoy them warm, which I’m sure would be delicious.

And guys? That’s all I have for you. If you take away one thing from the blog post, let it be that these pop tarts are DELISH. So much better than the boxed stuff from the store.

Added bonus? Every single ingredient is a pantry staple. Meaning you have zero excuses to not bake these up today. Tuesday pop tarts anyone? 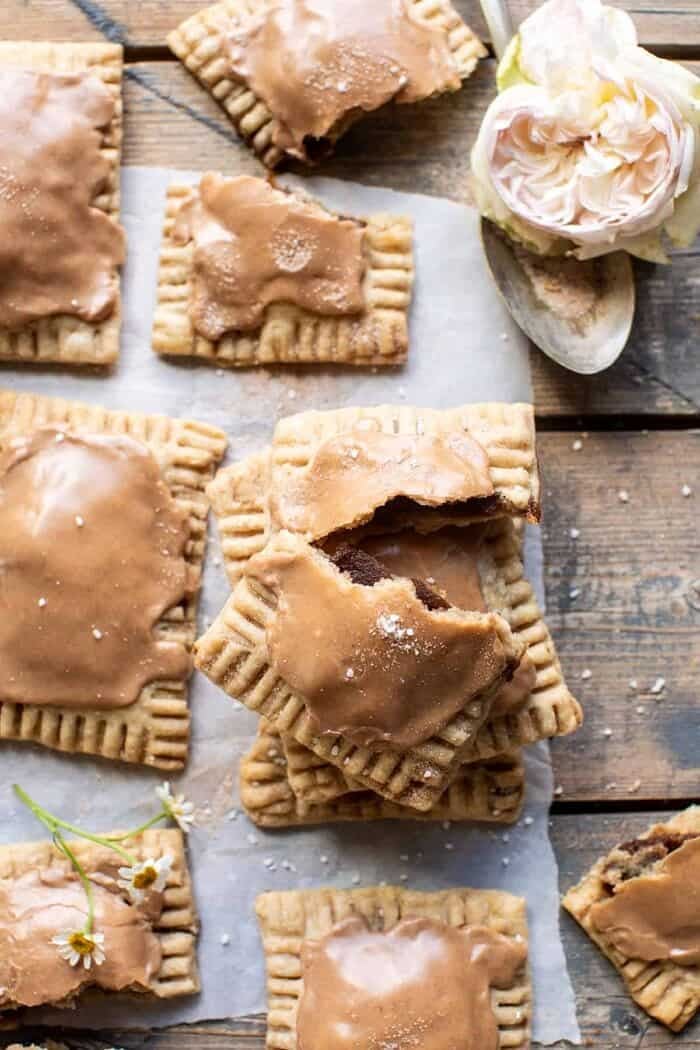 Looking for other homemade versions of childhood favorites? Try some of these.

Lastly, if you make these homemade frosted brown sugar cinnamon pop tarts, be sure to leave a comment and/or give this recipe a rating! Above all, I love to hear from you guys and always do my best to respond to each and every comment. And of course, if you do make this recipe, don’t forget to tag me on Instagram! Looking through the photos of recipes you all have made is my favorite!x

If you don't have a Food Processor: You can use use you fingers to mix the butter with the flour until the butter is pea sized. Slowly drizzle in the cold water as directed. To Make Gluten Free: Use an equal amount of your favorite gluten free flour blend in place of the all-purpose flour and whole wheat flour. I recommend Cup4Cup gluten free flour.
View Recipe Comments 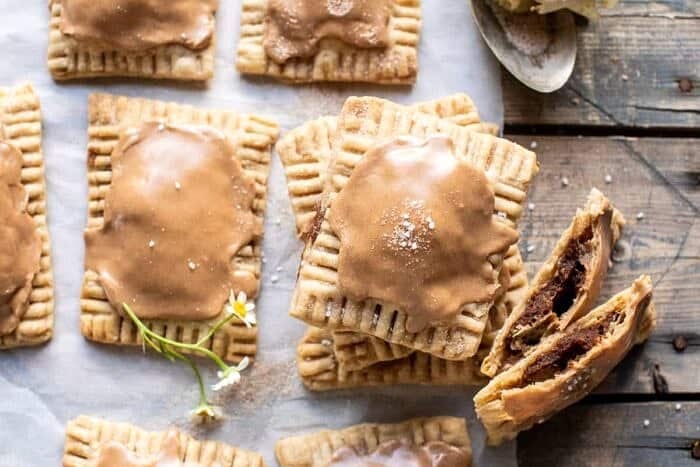 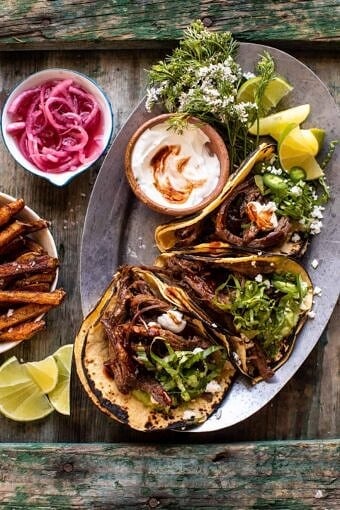