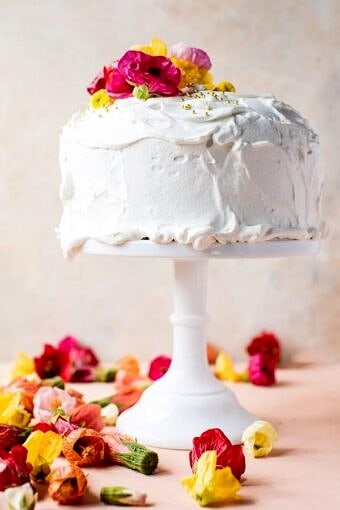 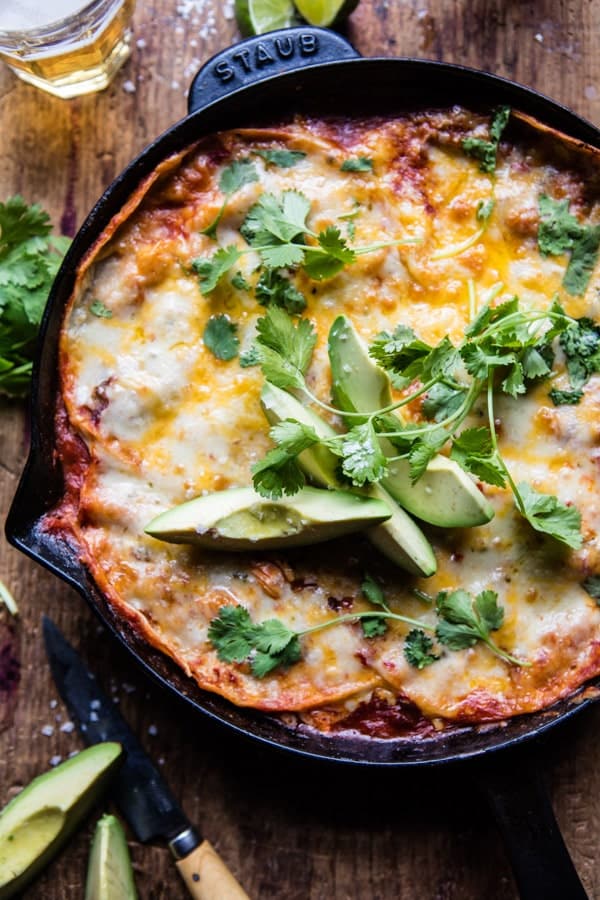 The tinga enchilada skillet…with lots of cheese…and a fried egg, because that’s how I do it over here. A little over the top, but I mean, not really, considering this meal is relatively healthy and on the table in under an hour. Yes, in under one hour and you can be eating this for dinner. cool. cool.

So can I tell you a little back story here for a second?

This recipe almost didn’t make it to the blog. To be completely up front, I really struggled with this recipe. Not so much the flavors, but more the texture and look of the recipe. The dish came to be in three stages… 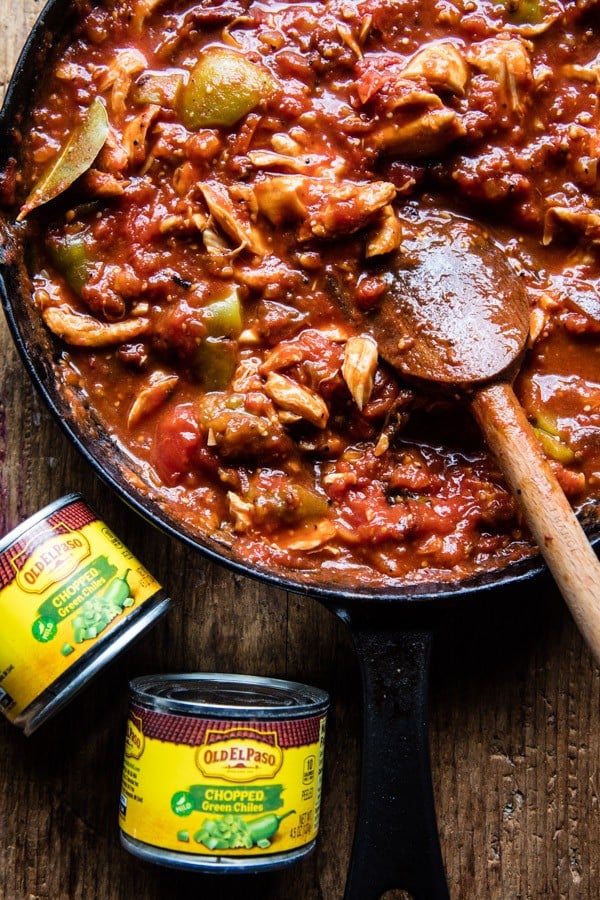 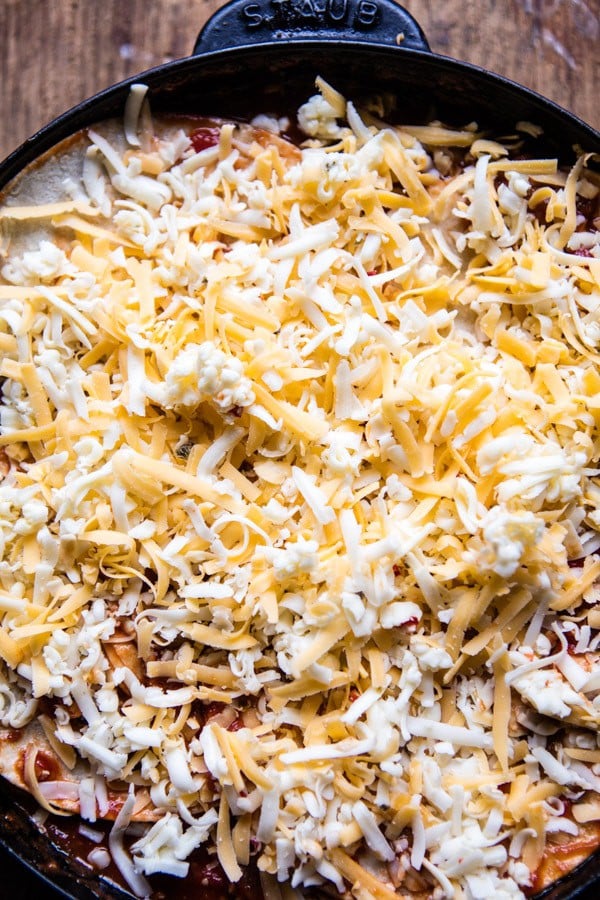 This first round was good, so delicious, but there was a problem. I used flour tortillas and the tinga style sauce just turned them to mush. So well the flavor was spot on, the texture was off, and the recipe needed to be fixed.

Stage two: same as stage one, but minus the slaw (because I didn’t feel it was needed) and this time using corn tortillas.

This second stage was also good and was definitely worthy of posting, but I just could not get the photos right. They looked dry, overcooked, just not worthy of how delish the recipe was. SO I scratched it, almost giving up on the recipe entirely. BUT then something amazing happened. That night as I was cleaning everything up, I had a ton of leftover fried eggs, like a ton. I was trying to get the perfect, but yet not too perfect, looking fried egg for these Moroccan fried eggs (weekend brunch anyone?!). I ended up frying a grand total of twelve freshly laid chicken eggs. Yes twelve, and honestly, it might have been more, but I’m too embarrassed to admit that. Got to get that perfect looking egg, you know? Yeah right…can you say perfectionist or what? <–that’s me.

Anyway, I had a ton of fried eggs leftover and I just could not bear to throw them out. I mean, they were beautiful with their brightly colored orange/yellow yolks, and their whiter than white egg whites (I LOVE that I can get my eggs fresh from right outside my door…literally). I just could not throw them out. SO, I saw the enchiladas sitting there on the counter and within seconds, the eggs were on top. Perfect compliment to this dish…eggs on enchiladas with lots of cheese? YUM.

I ended up sending that batch of enchiladas up to my parents that night and the response I got was so unexpected. They LOVED the enchiladas. Loved them so much. They said the sauce was what made the dish amazing, but the eggs definitely added something awesome too.

The only flaw…the tortillas. Everyone was in agreement that the tortillas were just soaking up too much of that awesome sauce. SO then… 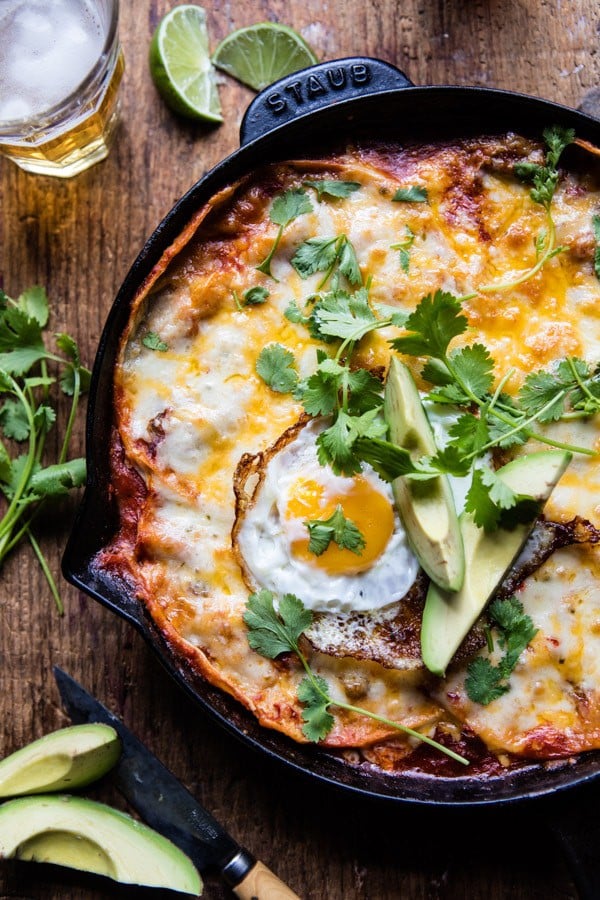 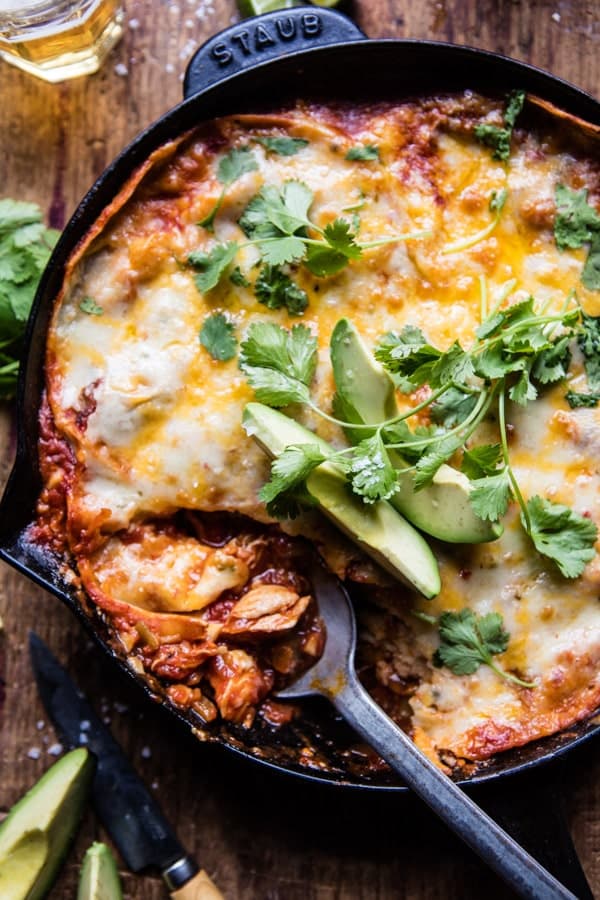 With stage three, I just got smart. I ditched the multiple pans and the entire rolling process. I just threw everything into one skillet and called it a day. I did this partly because I was semi tired of making and rolling enchiladas, but also because it’s just the best way to make this recipe. The sauce and the chicken all get cooked up in one skillet, which takes about twenty to thirty minutes to come together. I used boneless, skinless chicken tenders for quick cooking time, but breasts would work as well, just cut them into smaller chunks. The secret to the sauce is a decent amount of chipotle chile peppers. This dish is spicy, but not overly so, and the bay leaves really help to tame the dish down a bit. If you’re not a huge fan of spicy, just reduce the amount of chipotle peppers to one.

Once the sauce is complete, simply layer a few corn tortillas right over the sauce, then top with cheese and bake. The tortillas get crisp, the sauce stays saucy, and the cheese gets gooey and melty.

SO simple, quick and easy, but so delish.

Oh and then, while the dish is baking, fry up a few eggs for topping. They’re not a must, but then…when are adding eggs ever not a good idea? Eggs make everything that much better.

These tinga enchiladas are perfect for just about any night of the week, but I’m feeling like tonight might just be a great night for a cheesy meal? <–trust me, your Thursday night is in need of some skillet enchiladas guys.

Watch The How To Video: 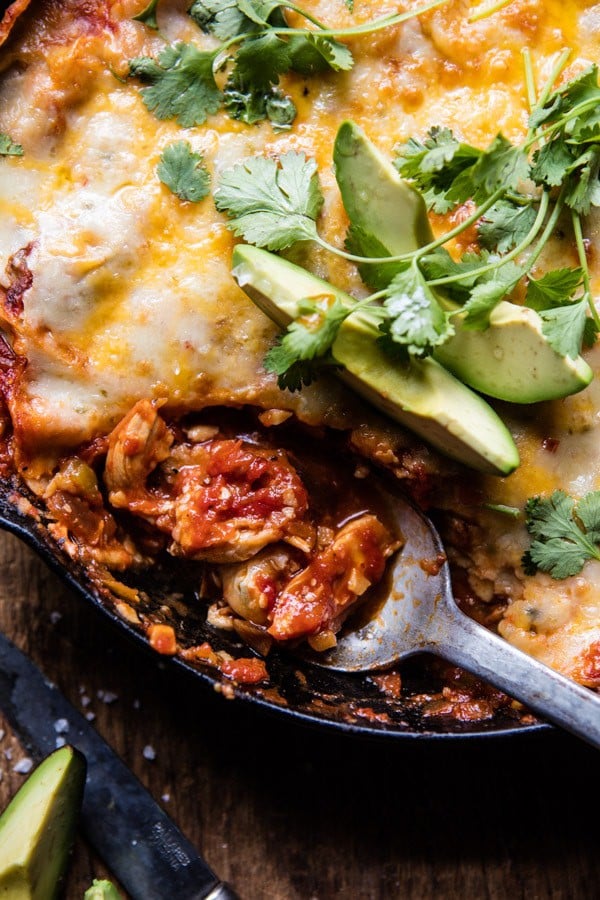 SKILLET enchiladas for the win. 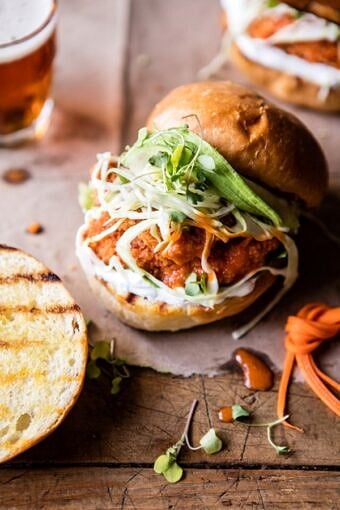