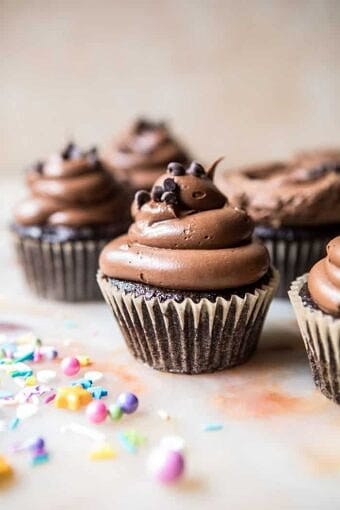 I can see how this poblano corn chicken tortilla soup could easily become a once a week late summer/fall meal.

I have been wanting to make this soup all summer long, but felt I needed to wait until the end of August, or early September, when the nights started to get cool and the mornings crisp. For some reason I just really can’t do soup in the summer. To me, soup is a fall thing and I can’t seem to break that mentality.

And yes, I know it’s totally not fall…yet, but again this is one of those great transition recipes that’s light enough for summer, but cozy enough to warm us up on a fall day. Can you tell I am way too exited? 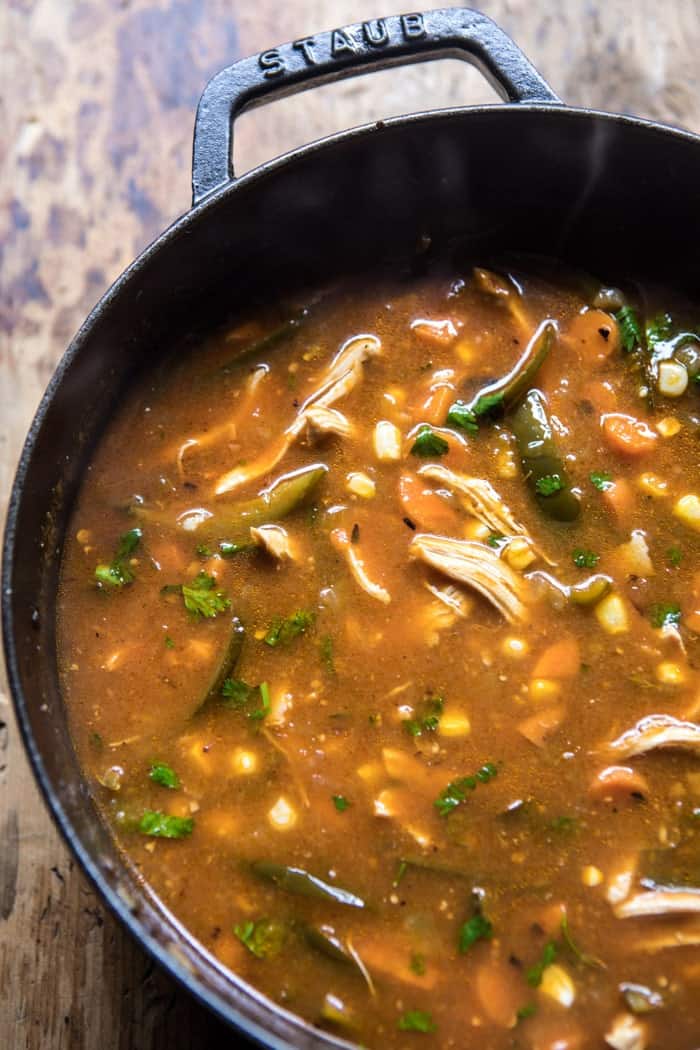 Anyway, after my brother Kai requested tortilla soup for dinner the other week, I finally decided it was time to make this recipe. I’m not going to lie, I am kicking myself just a little bit for not making it sooner because it’s just SO good.

Side Note #1: I did not even know Kai ate tortilla soup (he’s one of the pretty picky eaters in the family), but apparently he had a bowl while in Mexico and loved it.

Side Note #2: speaking of Mexico, after spending the end of July and most of August here in Colorado, Kai finally headed back to Puerto Vallarta, Mexico where he was supposed to be living all summer long. If you’ve been following along the last few weeks then you know that my grandma recently passed away. Since Kai was already in the states on one of his little trips back to film with me (he films all the videos you see here), he ended up just staying until my grandma’s service. He finally flew back to Mexico on Tuesday and will now be driving home to LA tomorrow. Fingers crossed his drive goes smoothly…everyone’s a little on edge about it.

Okay and done with the side notes. 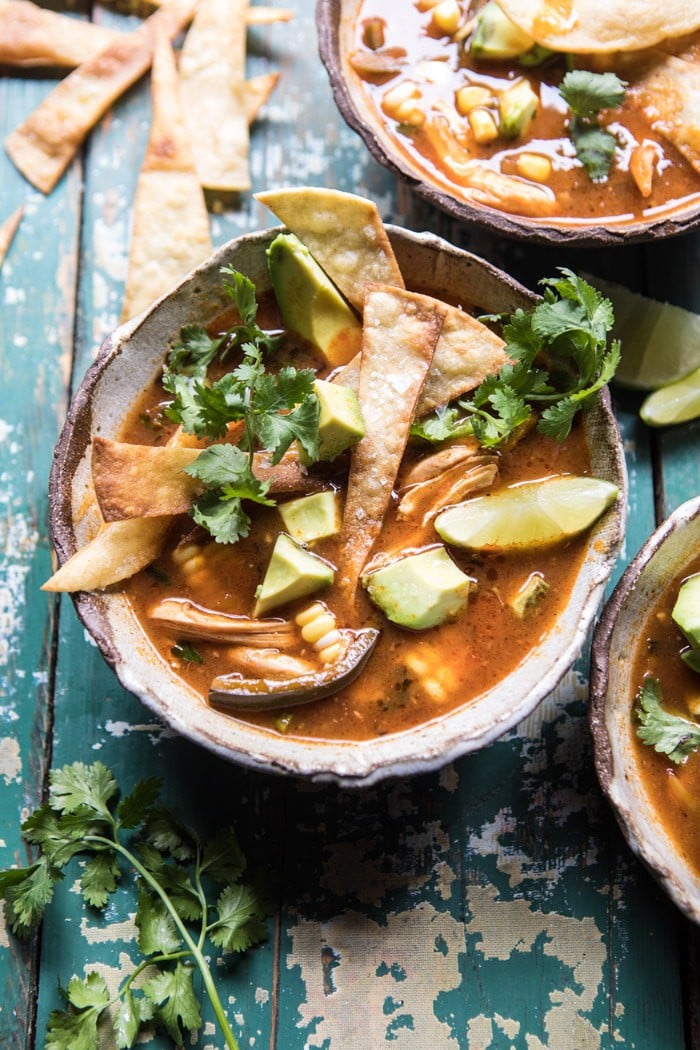 It’s not your traditional tortilla soup, which I think is why I love it so much. I have three not so secret secrets to this recipe.

Secret #1: use fresh tomatillos. I know that this looks like a classic red tortilla soup, but I actually used a decent amount of tomatillos for the soup’s base. I am a huge fan of the flavor they add. And while you might not be able to pinpoint the taste of the tomatillos upon first bite, they are what make this soup really stand out from all other tortilla soups.

Secret #2: enchilada sauce. Whenever I make tortilla soup I also use enchilada sauce instead of canned tomatoes. The amount of flavor the enchilada sauce gives off is unbeatable to anything else. ps. my favorite homemade (and EASY) enchiladas sauce recipe is in my cookbook.

Secret #3: poblano peppers. These have got to be one of my favorite peppers. So much flavor. I basically add them to all my Mexican inspired recipes these days. See these stuffed peppers and these enchiladas.

Nothing crazy, but I swear these three ingredients are what make this tortilla soup so special.

Okay. Okay. And I also love that everything is made in one pot. Been doing a lot of these recipes lately and I am loving them…hope you guys are too!

Just like with any tortilla soup recipe, the toppings are very, very, very, important. Meaning, you need lots of tortilla chips (extra salty with a little lime are my favorite), plenty of chopped avocado, good sharp cheddar cheese, and then if you like heat, some fresh jalapeños.

Add a margarita and you’ll have Thursday night dinner perfection.

Oh and lastly? This is naturally gluten-free and loaded with protein and veggies. So going back for seconds is totally the right thing to do…Healthy-ish Food. 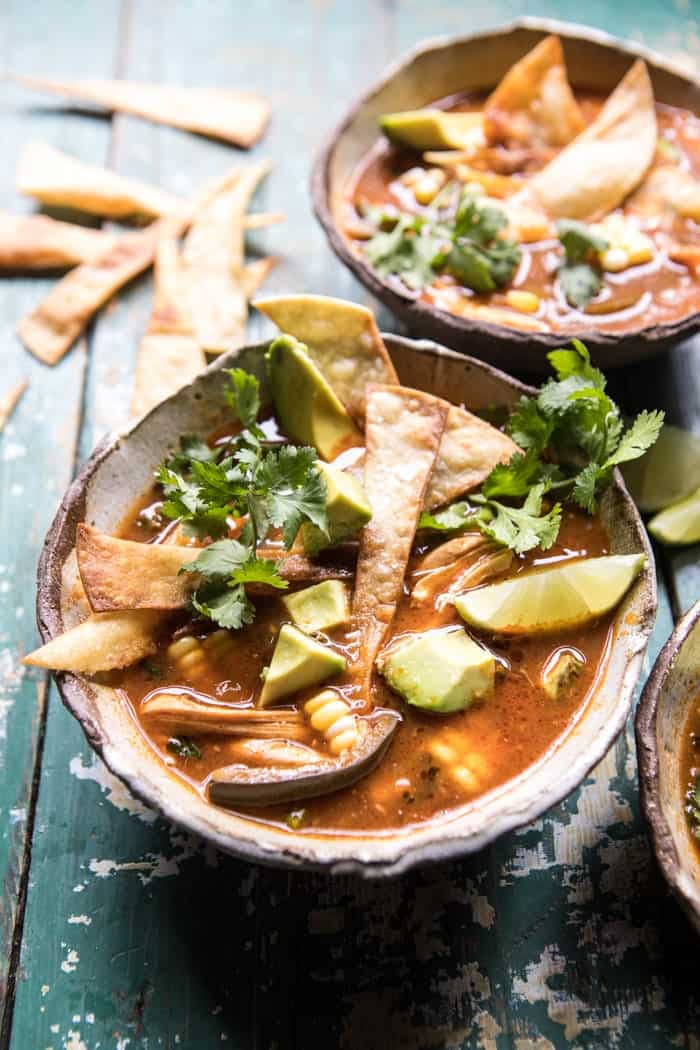 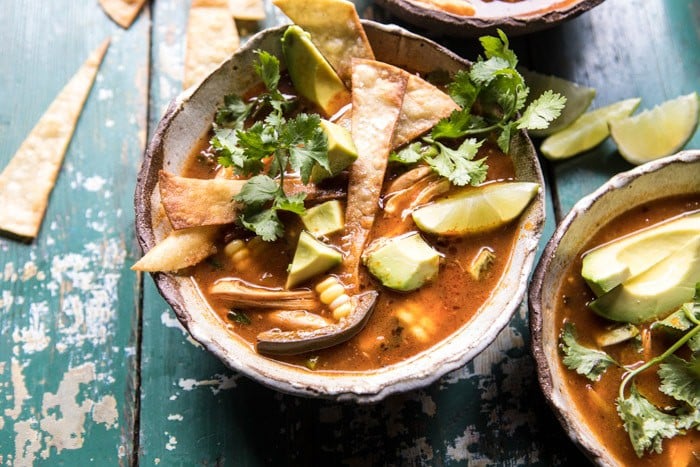 Tomorrow’s recipe however? We’ll it’s birthday inspired, so I will just leave you with that… 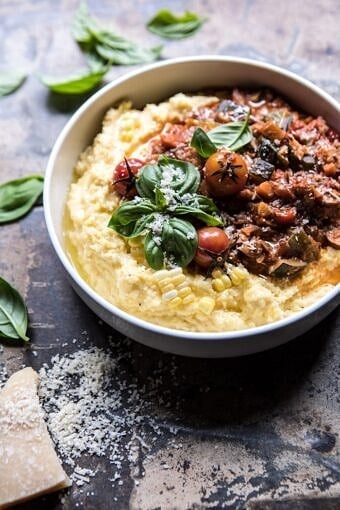