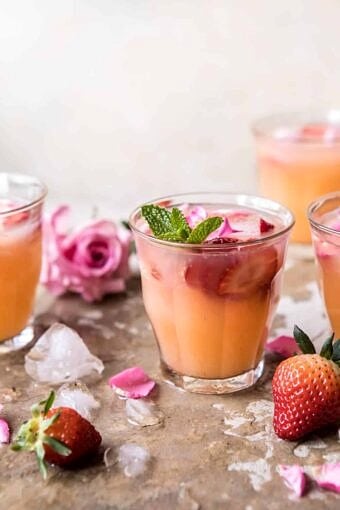 Easiest Cinnamon Crunch Knots for Easter weekend…and every other weekend after. 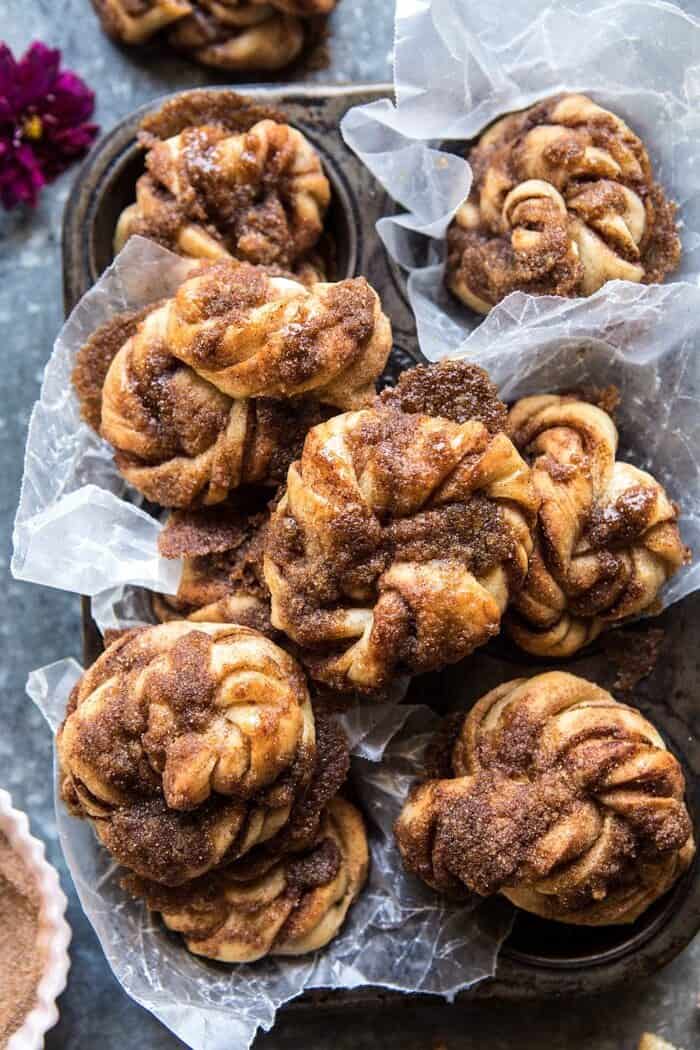 Watch the How To Video Here:

Easiest Cinnamon Crunch Knots for Easter from Half Baked Harvest on Vimeo.

Hey, hi and happiest Friday! Can you guys believe it’s Easter weekend? It really snuck up on me this year and since it has been snowing all week long (ugh, I wish I was joking) it doesn’t really feel like Easter all that much. Hoping the snow clears for a sunny weekend, but either way I’m excited to hang with my family, film new recipe videos, and hopefully find some Malley’s Easter bunnies in Asher’s Easter basket (because Malley’s is the best…Ohio people you know what I’m talking about).

For those of you above the age of twenty-one, who remembers their twenty-first birthday? It’s kind of a big one, but you guys, I seriously cannot remember what I did for my twenty-first. I believe I’ve mentioned this before, but my birthday has never been something I have looked forward to. Ever since I hit my teens it’s been something I dreaded instead of looked forward to. I know, I am so weird, but I am just not big on having all the attention on me, which I realize doesn’t really make sense considering what I do for a career.

Anyway, I can’t remember what I did on my twenty-first. Kind of lame huh? What did you guys do?

Also, let’s all wish Cait a very happy birthday because she’s totally going to be reading the comments!

Double also, I should probably make her a vegan and sugar-free birthday cake, huh? Hmm, that could be tricky, but thinking I should at least try, would anyone else be interested in a cake like this? 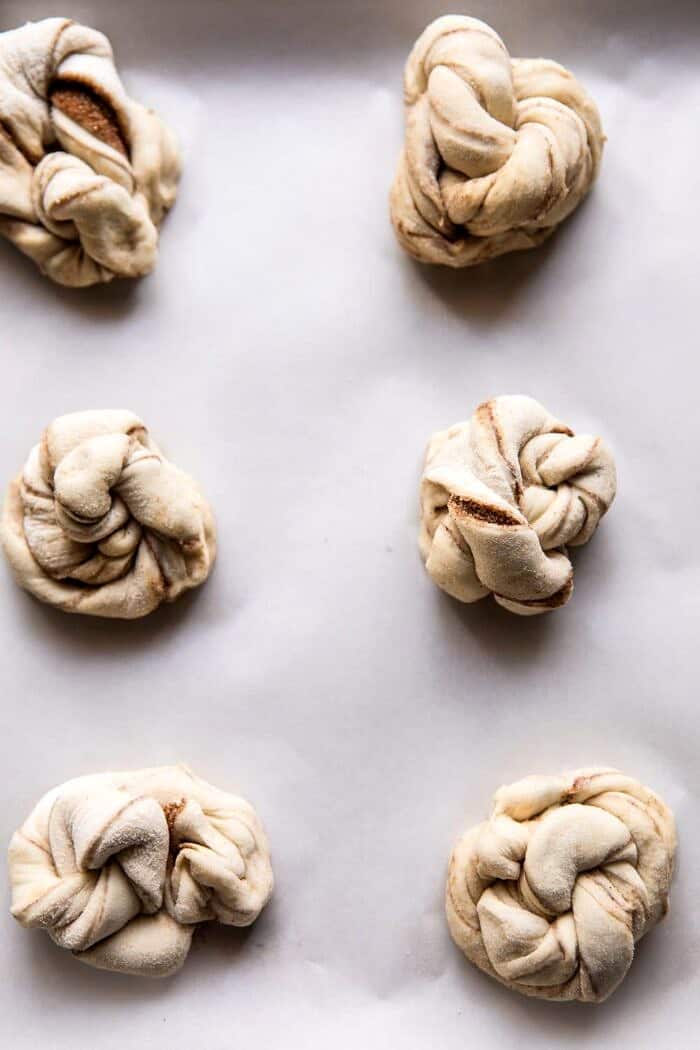 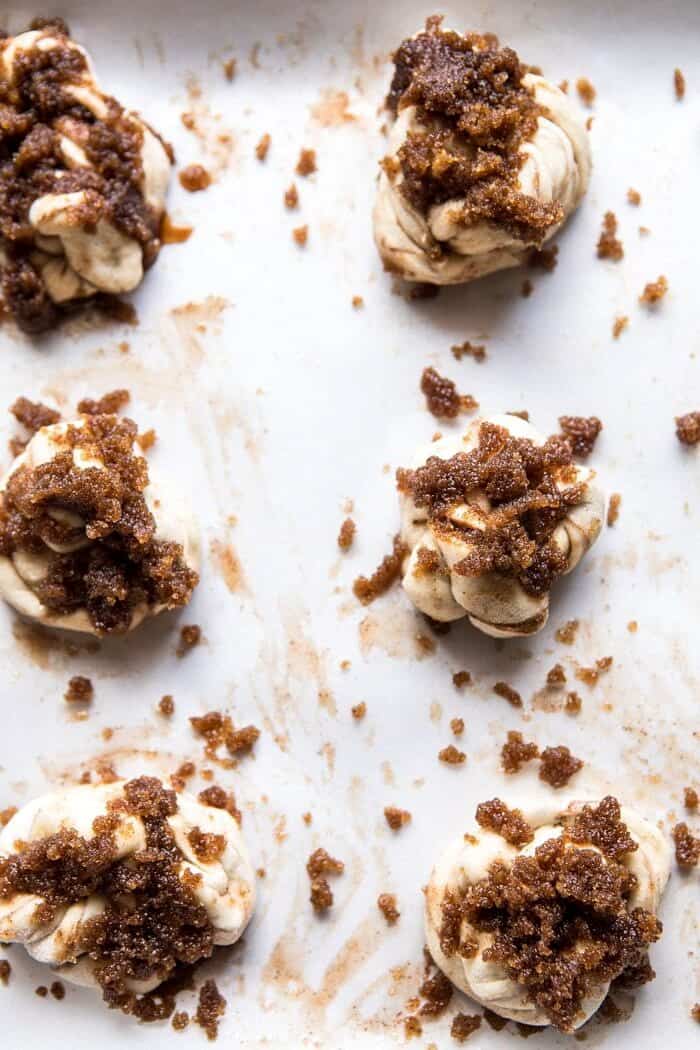 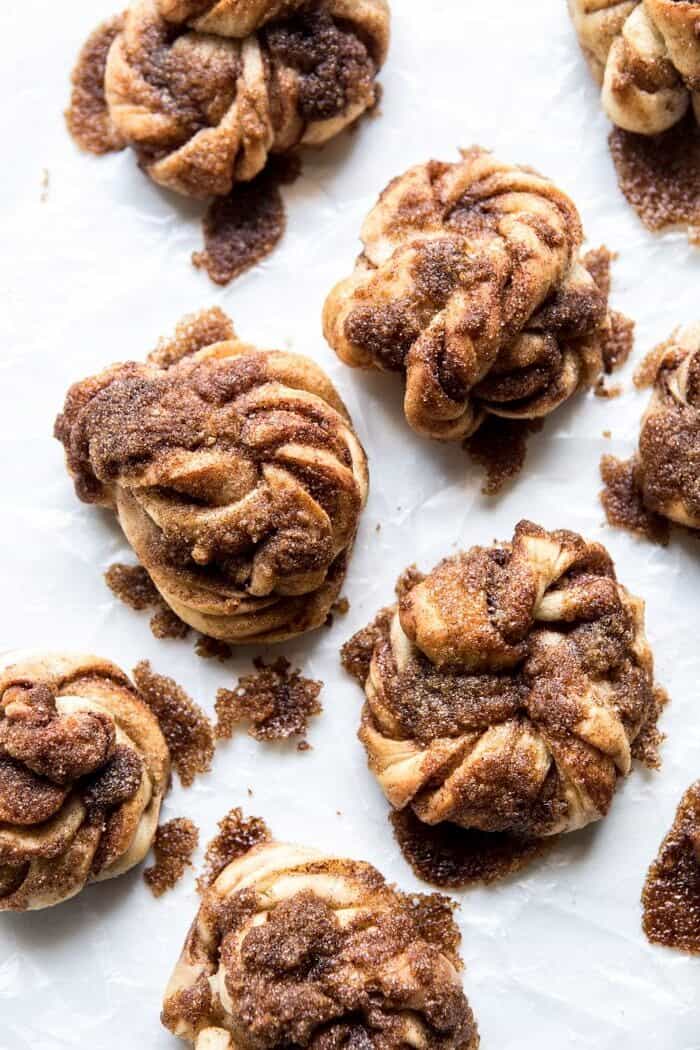 Let’s talk about these cinnamon crunch knots, which are in no way vegan or sugar-free (sorry Cait).

I put out a note on Instagram stories this week asking you all what recipes you’d like to see. The overwhelming response was quick, simple, easy, minimal ingredients, and healthy…ish recipes. The good news for me (and you!) is that I kind of already knew this is what you guys wanted, which is why I am sharing these cinnamon knots today. I wanted to leave you with an easy option for Easter brunching and snacking, and these cinnamon knots are that recipe.

They require only pantry staple ingredients and can be made and ready to go in under and hour. 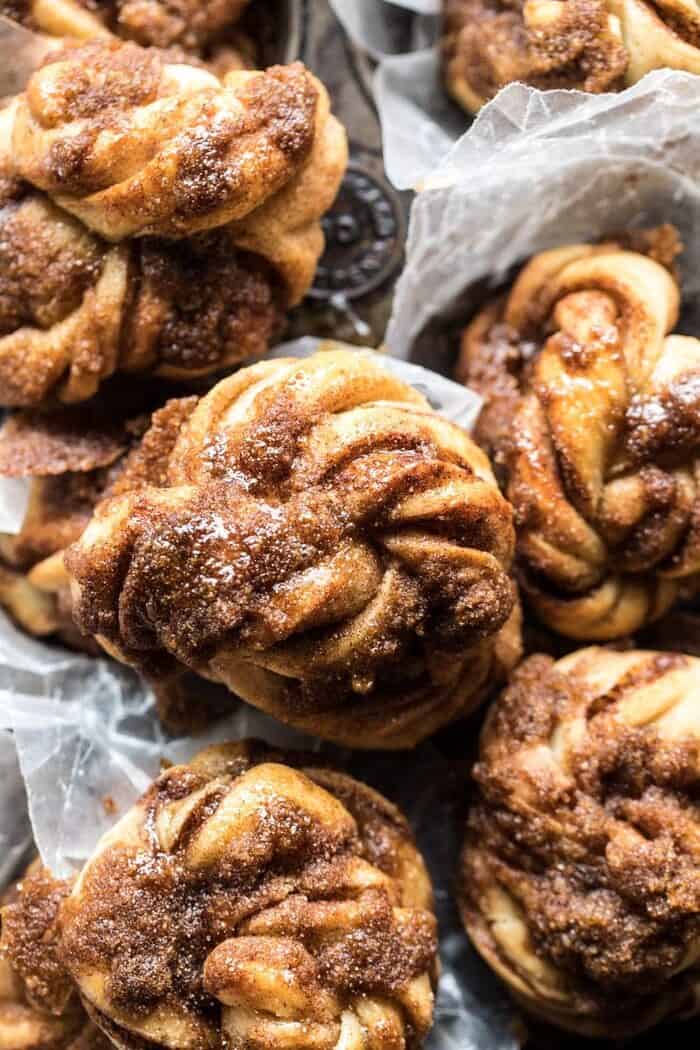 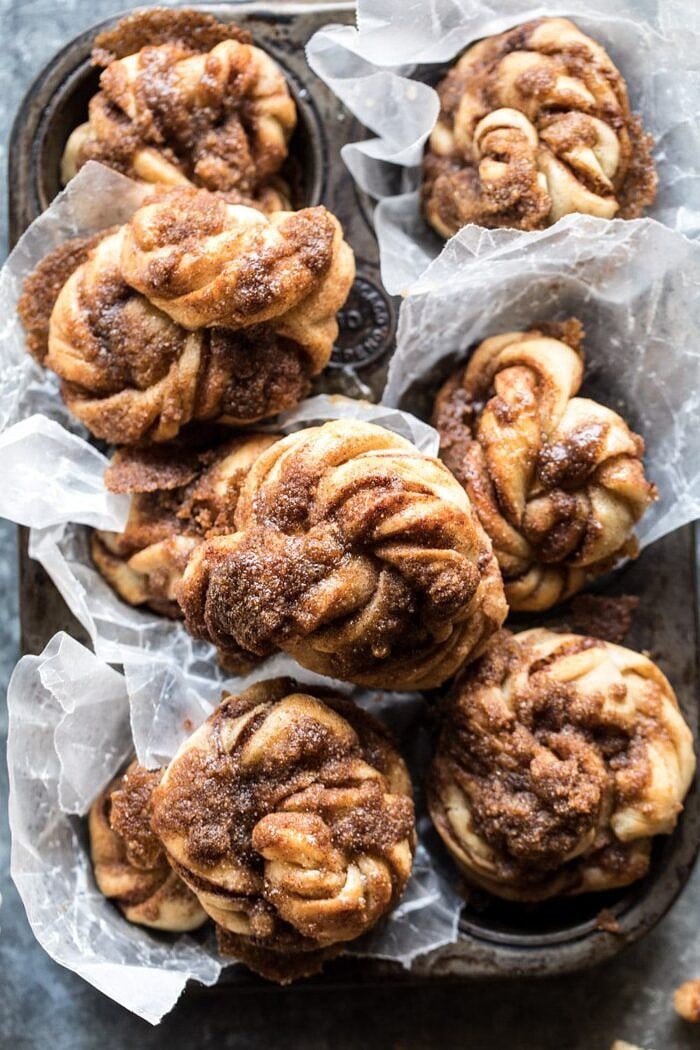 Here’s how these fun knots work. The dough is actually something you might be surprised by, but I promise it works. We are using pizza dough to make these knots. Yes, pizza dough! Homemade, quick and simple pizza dough, that is so easy. I’m talking easier than heading to the store and picking up some pre-made dough. All you need is flour, water, honey, and instant yeast. Just mix, let sit for a bit, and you’re ready to make your knots.

What I love about making these knots is that they are knots. Meaning, the more imperfect they are the better, so don’t stress about how they look. Trust me, once they bake up they will be delicious, and pretty, because cinnamon sugar has that effect on everything.

The key to these knots? That crunchy, cinnamon, sugar topping.

Have you guys ever had the Panera Cinnamon Crunch Bagels? They used to be my favorite (no Paneras up here), and their crunchy topping inspired the topping on these knots. You guys, the topping takes these cinnamon knots to another level. SO delicious. 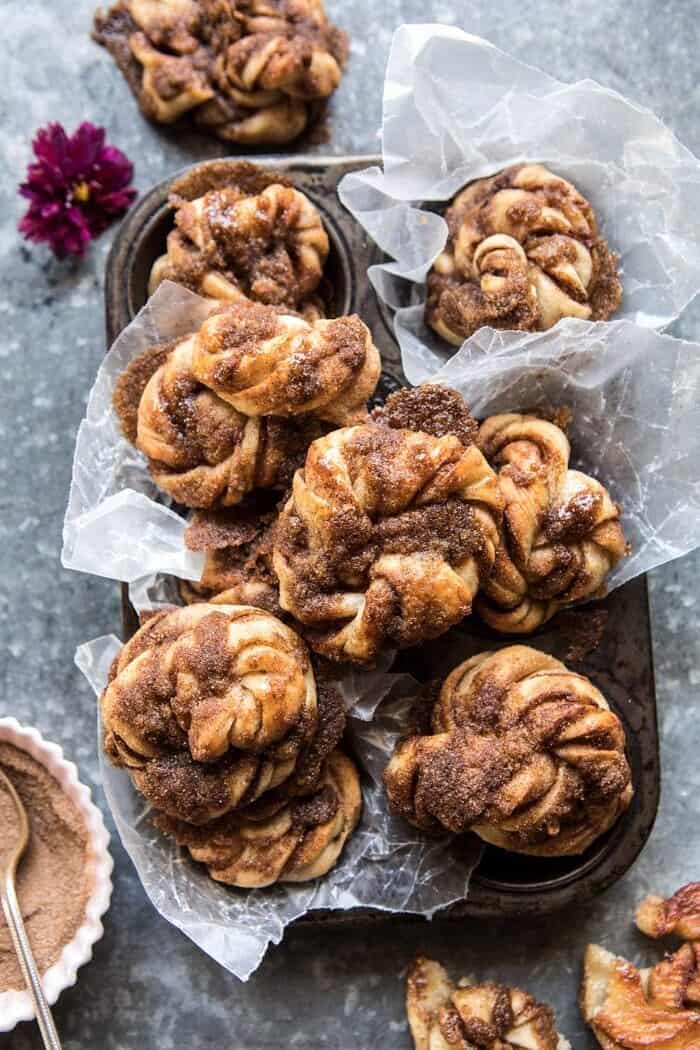 And guys? That’s it. So simple, but so, so, so good. There’s not a person in the world that would not like these (well, there may be people who wouldn’t eat these, but everyone would like these). I mean, they’re just such a classic pairing that truly can do no wrong, you know?

Make these for Easter this week, but be sure to keep the recipe in your back pocket to liven up your weekends ahead! 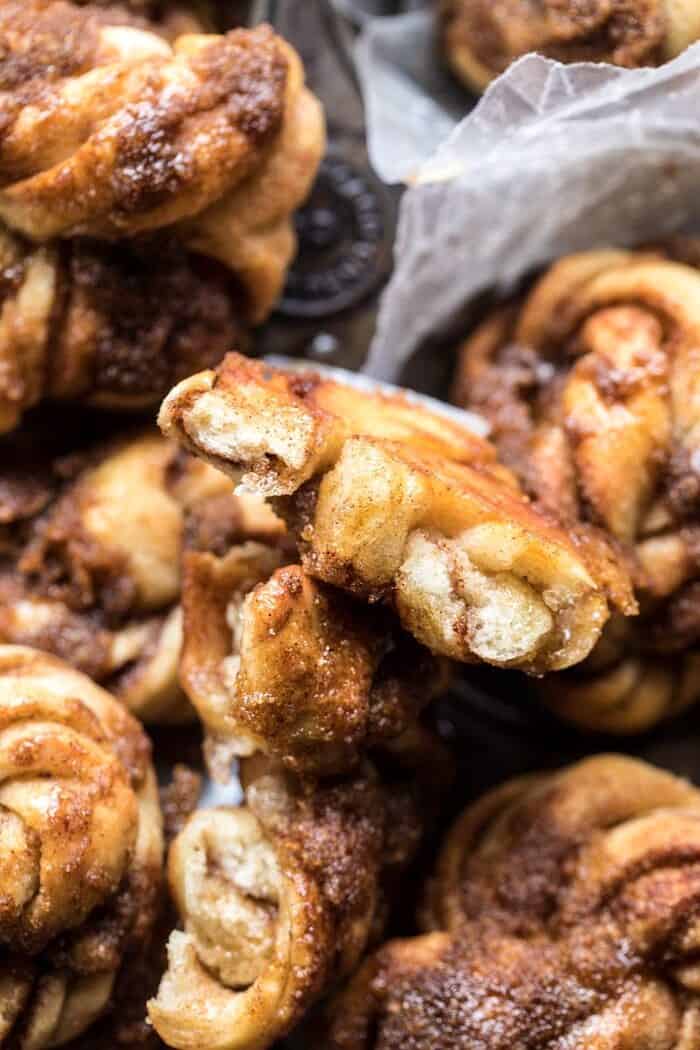 No Yeast Option: If you do not have access to yeast or simply cannot use, you can omit the yeast and instead use 1 1/2 teaspoons baking powder and 1 teaspoon baking soda, added with the flour. You can skip the rising and instead just let the dough rest 30 minutes, then roll, rest again another 15-20 minutes, then bake. The rolls will be a little less fluffy, but will be great!
View Recipe Comments 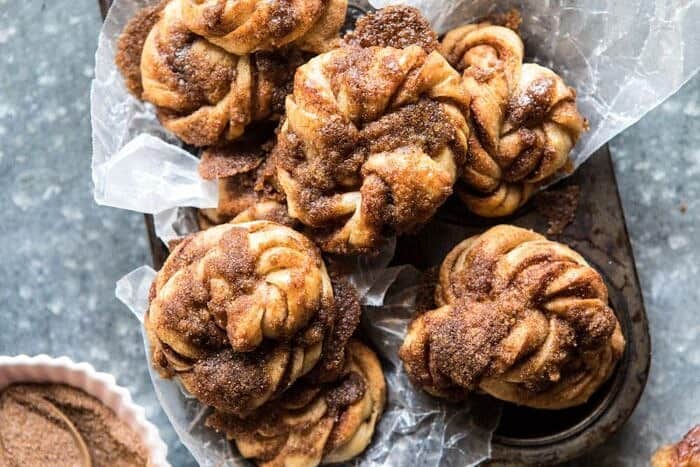 The most perfect, imperfect cinnamon knot.

PS. see you guys tomorrow for a new Easter cocktail! 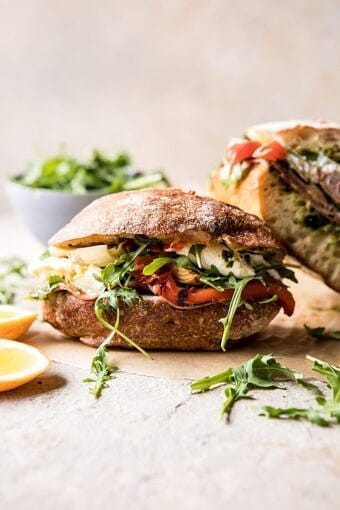