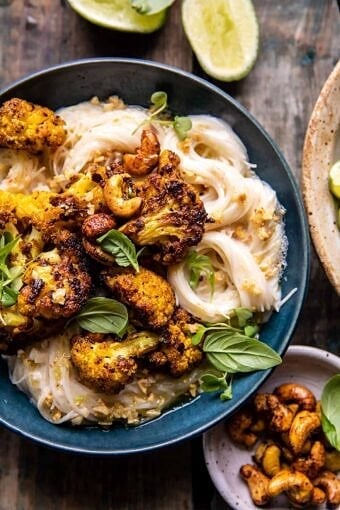 For a Tuesday treat or springtime brunch, make these Easy Chocolate Cinnamon Crunch Knots. Made using pantry staple ingredients, a good amount of cinnamon, a touch of sweet brown sugar, and a bit of chocolate, for an extra special cinnamon knot. Beyond delicious and the easiest to make. These knots extra cinnamony, chocolatey, and have a little crunch with every bite. Fun to bake up today, but equally great for upcoming Easter and Mother’s Day. 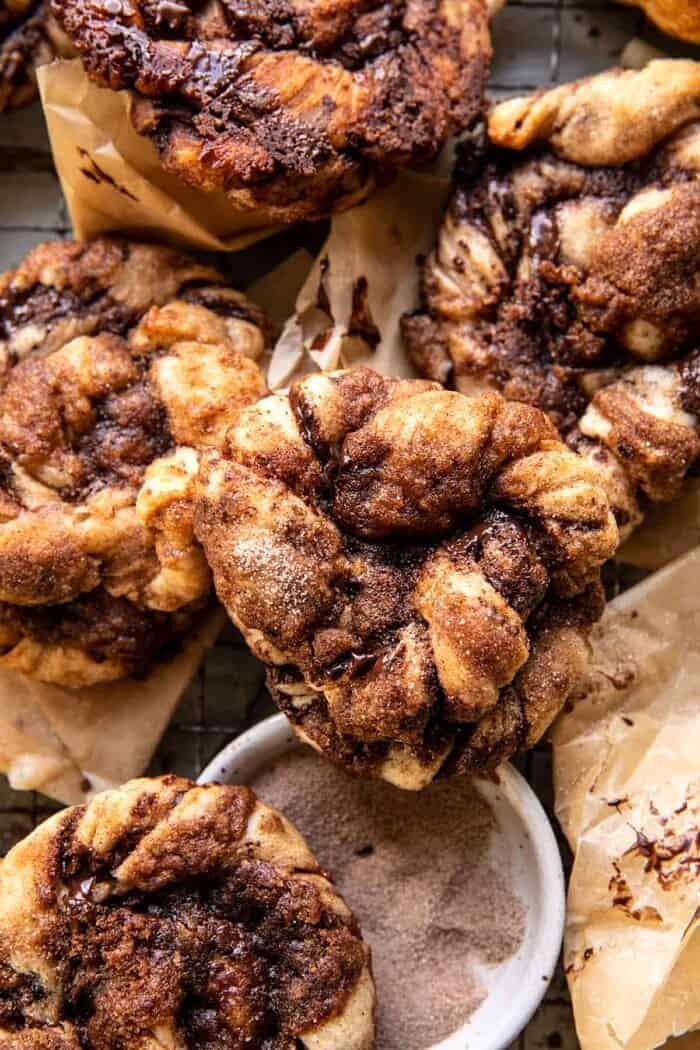 I know I said springtime up there in our little intro paragraph. But in reality, it is still very much winter here where I am. We’ve received more snow in the last couple of days than we’ve seen all year. So it’s safe to say that I am dreaming of warmer spring days. Though all this snow does make things cozier, so I can’t complain about that.

Anyway, with Easter rapidly approaching, I really wanted to share a couple of new holiday recipes that are easy to recreate. These knots are delicious and feel a little different from the usual sweet cinnamon roll. In fact, I actually think they’re better. Bold statement, but something about these knots are extra special.

It’s the chocolate…and the cinnamon crunch topping…which has been a favorite of mine since my days of regularly eating Panera Bread bagels. 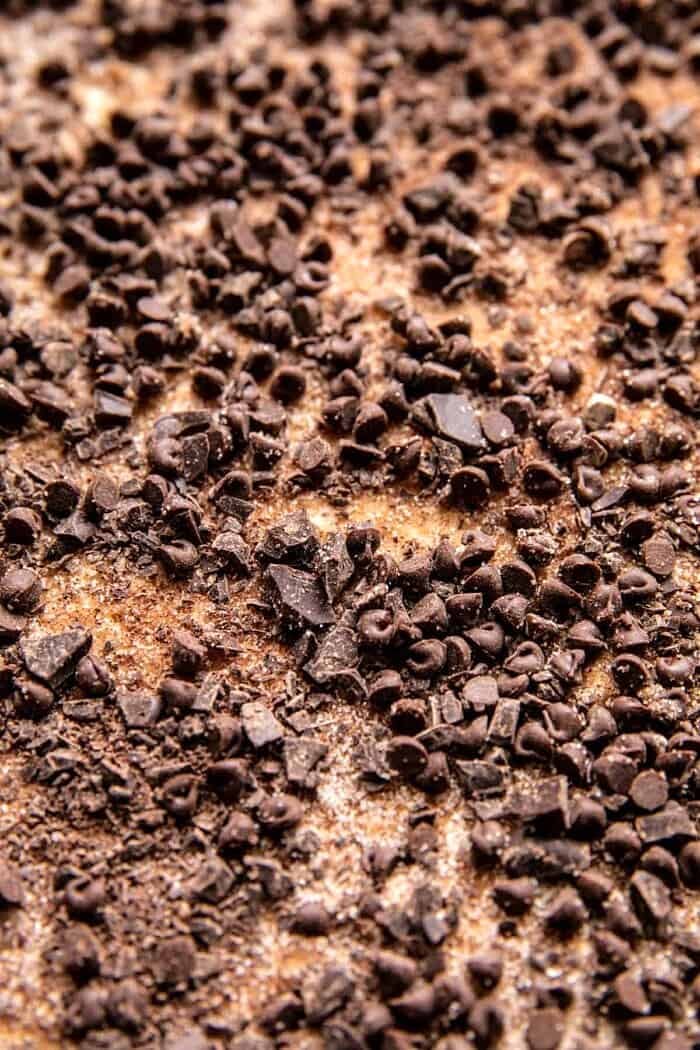 The Idea and the Inspiration

If any of you grew up similar to me, then you’re very familiar with Panera Bread. Their chicken noodle and broccoli cheddar soup in a sourdough bread bowl are really etched in my memory as some of my favorite childhood foods. The bread bowl is obvious, but the noodles they use for their chicken noodle soup are a game-changer. And something about their broccoli cheddar soup really makes it better than all the rest.

And then there are their bagels. They were always a special treat that my brothers and I begged my mom for when we were growing up. She didn’t splurge on them all too often, but when she did, it was the best. Occasionally we’d go for the chocolate chip, but nine times out of ten, it was the cinnamon crunch bagel all the way. 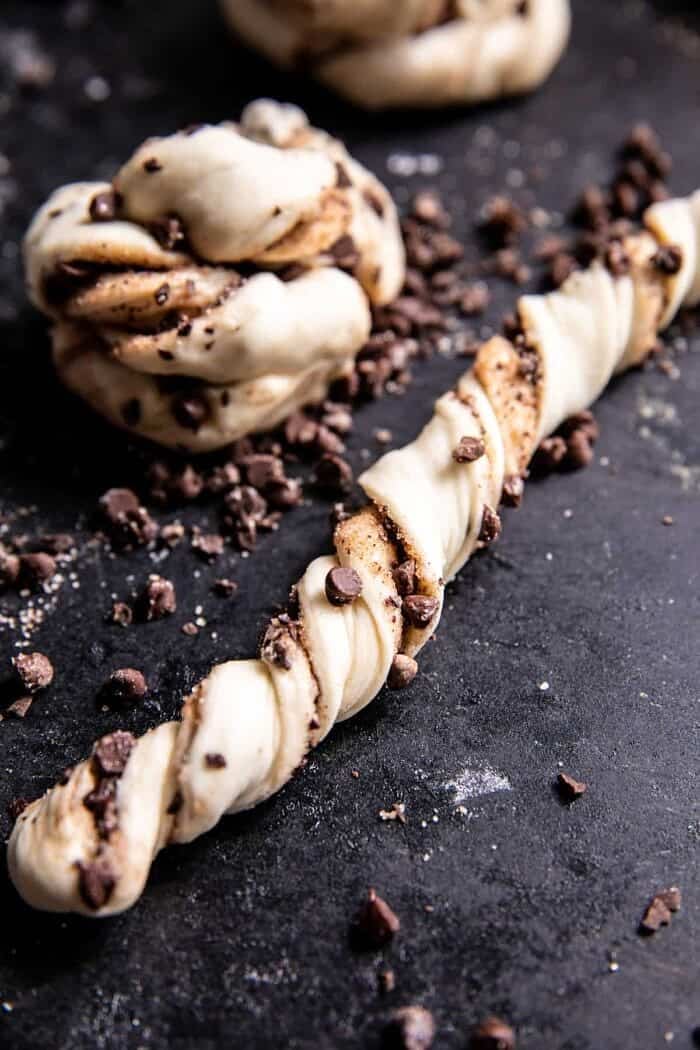 If you haven’t had a cinnamon crunch bagel, it’s the sweetest bagel you’ll ever enjoy. They have vanilla and cinnamon throughout the dough and the crunchiest cinnamon sugar topping to really takes them over-the-top. Especially when toasted with butter. 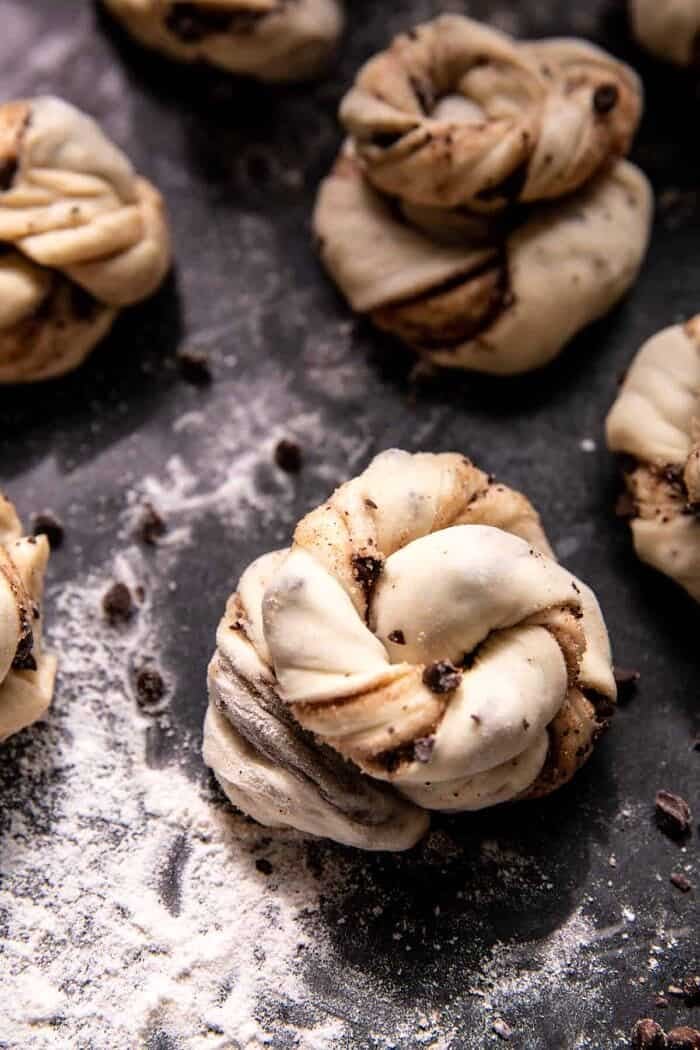 Since I’ve always loved that special bagel topping, I’ve made a few recipes that use it, including homemade cinnamon crunch bagels, but never something with a little chocolate throughout…until now!

I look at these fun knots as a cross between a chocolate chip bagel and a cinnamon crunch bagel but with this the doughiness of a cinnamon roll. 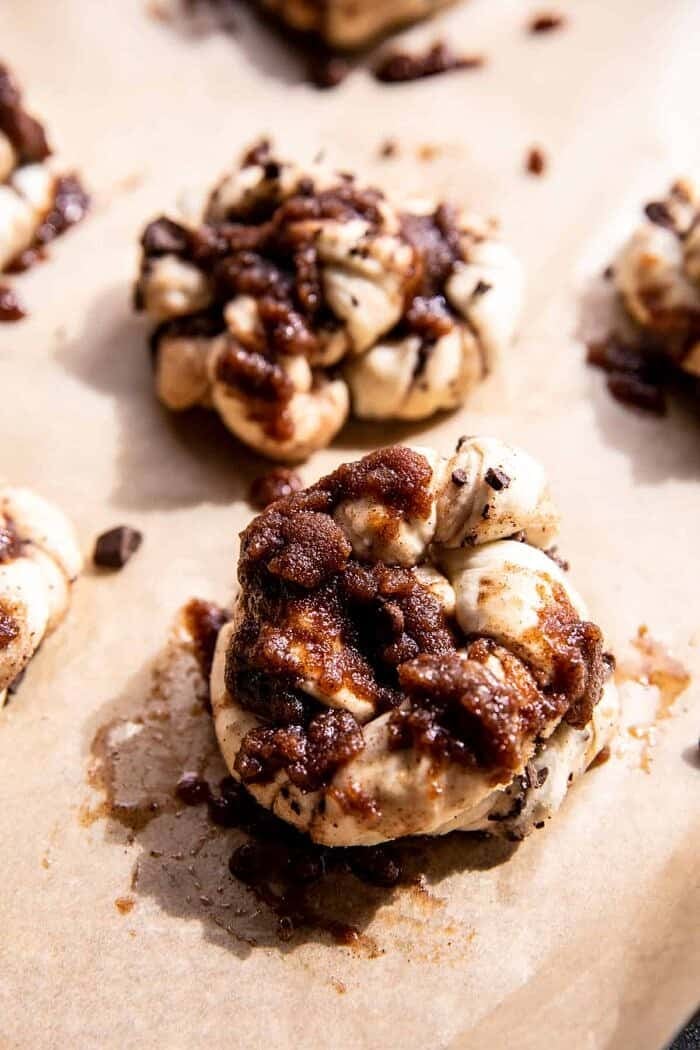 I wanted to keep these easy and no fuss. The dough is actually something you might be surprised by, but works perfectly in this recipe…homemade quick and simple pizza dough. But I swapped in milk for the usual water to create a softer dough, it’s so easy. I’m talking easier than heading to the store and picking up some pre-made dough. Simply mix the dough, and let it rise, nothing fancy.

What I love about making these is that they’re knots, meaning, the more imperfect the better. So don’t stress about how they look. Trust me, once they bake up they will be delicious and pretty…because cinnamon sugar has that effect on everything.

The key to these knots? The sweet cinnamon chocolate filling and that crunchy, cinnamon, sugar topping. The filling is made with cinnamon sugar and mini chocolate chips. Or use finely chopped chocolate, you’ll want something smaller in size, it will twist up nicer within the knots.

The cinnamon crunch topping is a mix of brown sugar, cinnamon, and butter. Simply sprinkle the topping over top of each knot before baking. As the knots bake, the chocolate melts and becomes gooey, while the topping begins to caramelize becoming crunchy. 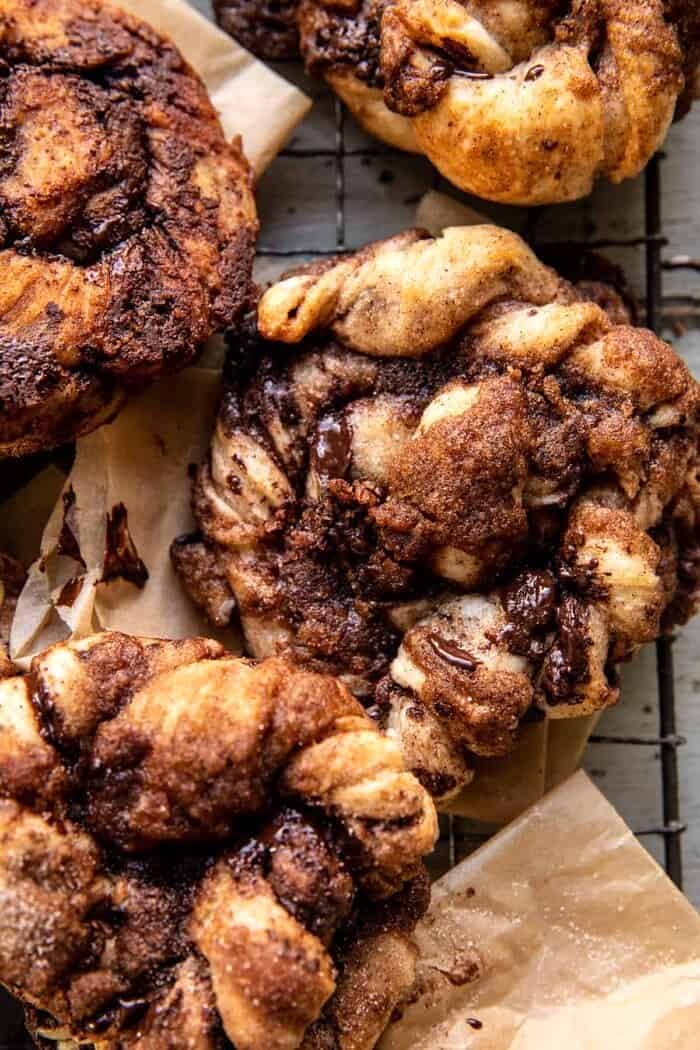 I do want to note that the cinnamon crunch will fall off the knots onto the pan. What I like to do is spoon/scoop the sugar up off the pan. Then simply spoon it back over each knot. This is why it’s important to line your baking sheets with parchment paper.

And that’s it. You have to eat these warm while the chocolate is melty. They are hard not to love. Make these for a fun treat today, this weekend, or for Easter. But be sure to keep this recipe in your back pocket to liven up your weekends ahead! 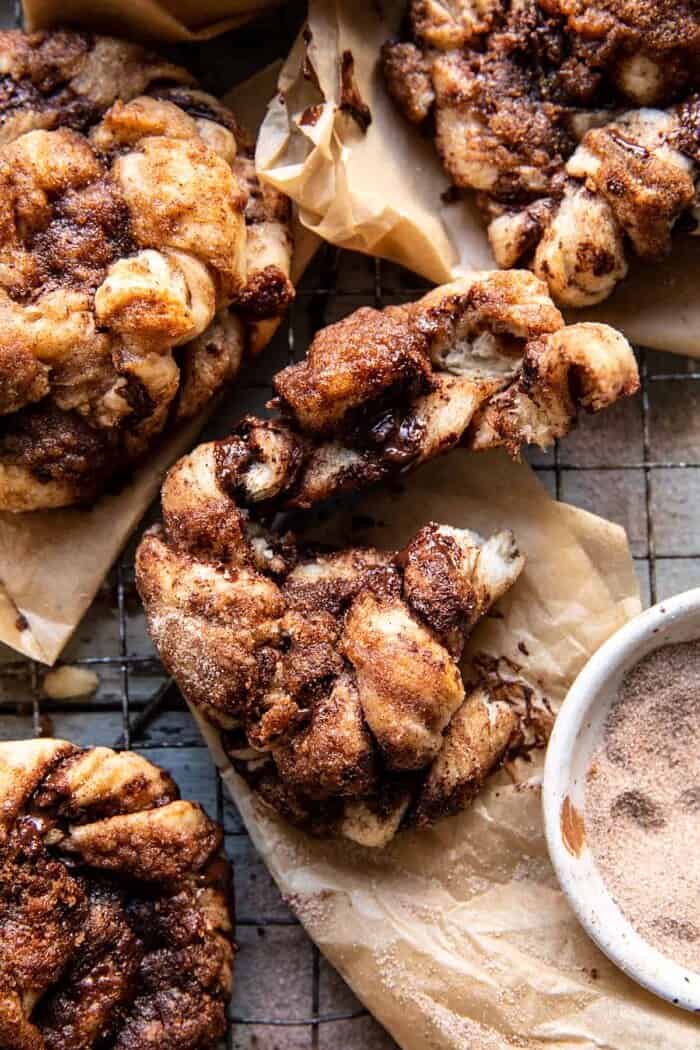 Looking for other springy brunch recipes? Here are a few to try:

Lastly, if you make these Easy Chocolate Cinnamon Crunch Knots. be sure to leave a comment and/or give this recipe a rating! Above all, I love to hear from you guys and always do my best to respond to each and every comment. And of course, if you do make this recipe, don’t forget to tag me on Instagram! Looking through the photos of recipes you all have made is my favorite! 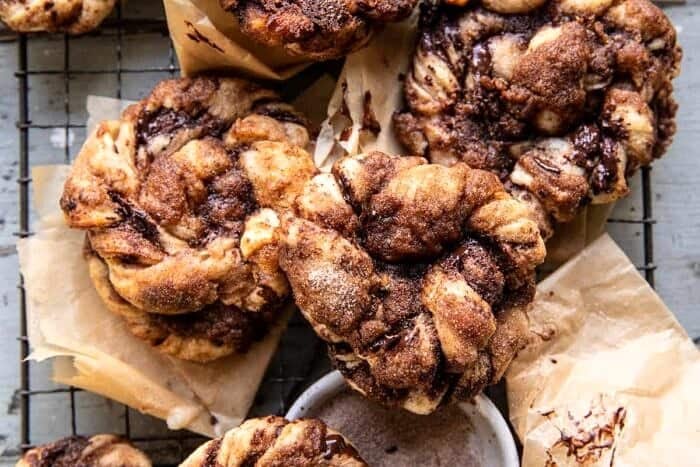 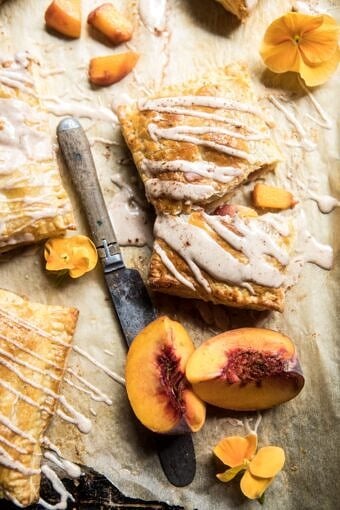 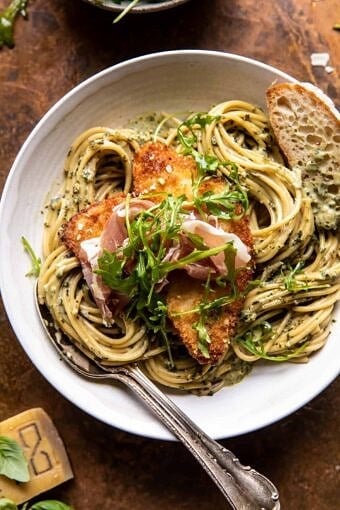